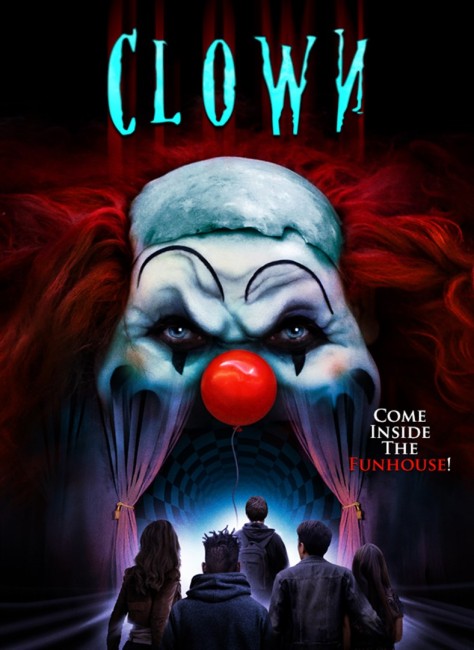 In 1994, in the Hidden Desert in Nevada, the locals turn on and attack the members of the Gaspadi Family Circus who been on a murderous rampage through the town. Twenty-five years later, ten teenagers stop off in the area on their way to a concert. Davy wanders off and comes to the circus. The others follow and enter the funhouse where they soon find themselves trapped in the labyrinth and pursued by a murderous clown.

The Asylum is a company that has had some success in recent years specialising in low-budget films that come out mimicking the titles of big-budget, high-profile releases in the hopes that people won’t look too closely or notice the difference. It is a strategy they call ‘mockbusters’ and has produced titles such as Snakes on a Train (2006), Transmorphers (2007), Allan Quatermain and the Temple of Skulls (2008), The Day the Earth Stopped (2008), The 18 Year Old Virgin (2009), Paranormal Entity (2009), Battle of Los Angeles (2011) and Abraham Lincoln vs. Zombies (2012), among others.

I had some hope for Clown based on the Eric Forsberg name but sadly it is just another crappy killer clown film. The film has been made on the cheap – the sets of the abandoned town consist of no more than two buildings and an old gas truck. The carnival itself is represented by no more than a couple of optical shots of a big top tent appearing over the horizon and a mockup of the entrance to the funhouse. The sets for the interior of the funhouse are even cheaper. Much is constantly made of how the place is a maze and we are told the walls are steel-plated. However, when we actually see the walls they are made of wooden slats with visible gaps of several inches with the light from outside coming in – you keep wondering why the characters don’t just kick their way through and escape.

The film is inhabited by a group of unlikeable teens that you absolutely know would have been the last choices for any regular Hollywood casting call. (There seems to be some kind of nepotism at work too in that a couple of them would appear to be children of Asylum executives with surnames like Latt and Rimawi).

The film is rather tedious. More so than a killer clown film, it feels like B-budget Rob Zombie – in particular, one is reminded of Zombie’s 31 (2016) and its maze of death traps. On the other hand, the scenes with people running around a maze amid garish lighting and maniacal clown laughter goes on far too long. The deaths when they come are nothing special. There’s a particularly lame one where we see someone popcorned to death.