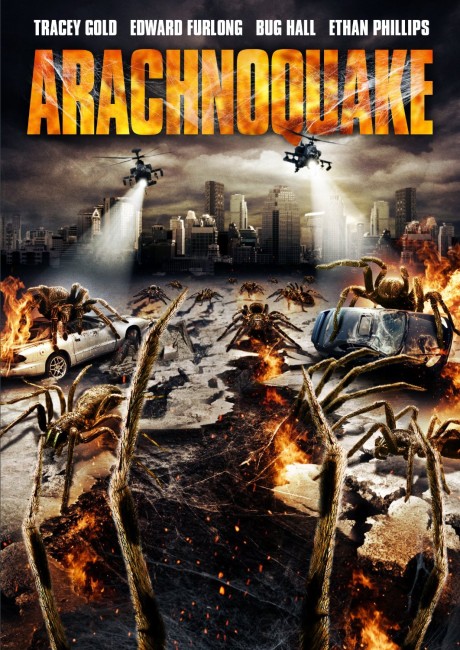 Paul drives a New Orleans tour bus for his father but prefers to spend most of his time partying. He sets out on a tour with half-hearted interest only to find the street ahead has been torn apart by an earthquake. Spiders that are the size of dogs and larger and can breathe fire start pouring out of the crevice. As the city is overrun by the giant spiders, the party seek refuge inside the tour bus and Paul tries to get them to safety. Aboard the bus is Katelynn and her two teenage children. Elsewhere Katelynn’s husband Charlie is driving a bus transporting a team of cheerleaders when they break down on a country road and the bus is surrounded by spiders.

Arachnoquake is typical fare for the low-budget Syfy monster movie. That said, it is not unentertainingly so. It wheels all the formula into place – the emergence of a horde of CGI-created creatures; the assortment of characters caught in the midst; various schemes to be rid of the menace. There is the requisite casting of stars who had some semblance of a career over two decades ago but having been languishing in career backwaters since then – in this case, Tracey Gold, once the sister in tv’s Growing Pains (1985-92), as an asthmatic mother and Edward Furlong as her husband (where Furlong still looks baby-faced and under the age of thirty despite being 35 at the time of the film and his character being given two teenage children).

Certainly, the effects are better than one usually gets in the entries from The Asylum and other B-budget companies mining this same vein. The film keeps itself remarkably restrained in the seriousness department – mindedly, this came out a year before Sharknado (2013), which pushed the low-budget monster movie towards the arena of the wilfully ridiculous. There are some absurdly entertaining scenes with giant spiders swimming after boats and the like. Indeed, the film delivers exactly what you expect of it and, as such, proves perfectly entertaining.