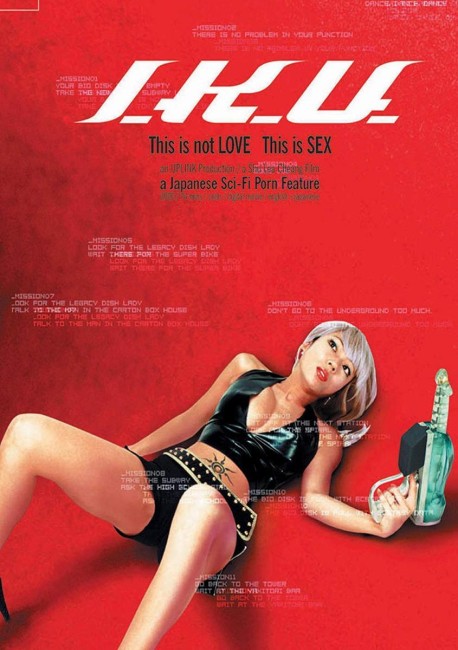 In the early 21st Century, the Genom Corporation has created a sex android known as the I.K.U. Coder with the purpose to obtain information on human sexual experience by as many varied encounters as possible. The information is downloaded for transmission and consumption via the internet. One such I.K.U., Reiko, is sent on a mission through Tokyo.

I.K.U. is a self-described “sci-fi indie cyberporn fantasy”. Which only really sounds like a pornographic film with pretensions. However, this is in fact intended as a serious artistic statement by Shu Lea Cheang, a Taiwanese-born American-resident artist previously known for her video and online installation works that centre around issues of gender identity, futurism and cyberculture. The film is produced by Uplink, a Japanese publishing and film distributing company specialising in independent films that co-produced the last four films of Derek Jarman.

I.K.U. is a film that clearly construes pornography not as erotica but pornography as a concept – in this case, conducts a conceptual cross-fusion with science-fiction. The stated premise for the film came when Shu Lea Cheang pondered the sexual possibilities inherent in Blade Runner (1982). The film posits the logical next step beyond Blade Runner – that of replicants being designed for use as sex androids. There are a number of Blade Runner references throughout, the funniest of which is the opening that takes off from the last scene of Blade Runner – here the origami unicorn is crushed underfoot and the male and the female replicant start making out in the elevator. The elevator scene acts as a promising opening, with the female android blankly mouthing lines like “I love you, I trust you,” something that the actress’s broken English enunciation makes seem even more remote controlled.

The film overflows with a lot of energetically co-opted MTV and Cyberpunk imagery, albeit conducted on a low-budget – hyper-kinetic animation and infobyte displays, an excess of flashing light effects and the camera rarely mounted on a horizontal axis throughout. There are some nifty CGI shots of hands morphing into glowing dildos, even internal shots of animated penises penetrating vaginas. There are a good many potential elements to the plot – a plan to digitise sexual experience for transmission via the internet, rogue viruses, the central character of a sex android that achieves self-awareness through sexual awakening. Unfortunately, none of it coalesces into a plot of any sort.

Bizarre trivia:– The acronym I.K.U. is actually the Japanese onomatopoeia for orgasm. The film’s website (www.i-k-u.com) contains a section where one can apply to become an I.K.U. Coder.

Shu Lea Cheang had previously made Fresh Kill (1994) set in a heavily polluted world and subsequently returned to the science-fiction genre with Fluido (2017) set in a post-AIDS future.