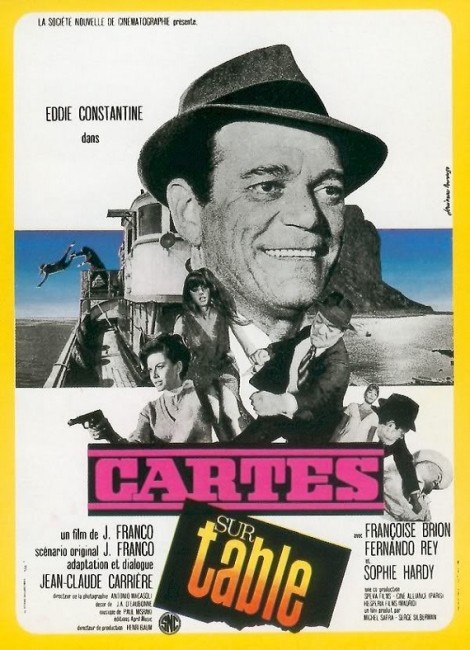 All around the world, public figures are being shot by dark skinned mystery men. One of the assassins is captured by Interpol and they are puzzled to see the man change skin colour after putting on his glasses. They find that all of the mystery assassins are people who have been abducted and have RH- blood type. Interpol decides to send former agent Al Peterson, who has RH- blood type, to Alicante, Spain, not telling him that he may be abducted. Chinese agents also try to pay Peterson to go. In Alicante, Peterson uncovers a secret organisation that is turning the RH- abducted people into mind-controlled robots.

The late Jesus or Jess Franco (1930-2013) is considered the world’s most prolific director. Between 1957 and 2013, Franco directed a purported 199 feature films. Many of these exist under a labyrinth of alternate titles and different cuts. Franco’s most prolific heyday were during the late 1960s to the mid-1970s during which he was producing six to eight films per year. His output covered a great many different genres from thrillers, spy films and historical works but most of all horror and erotica/pornography. Franco’s films have attained a certain cult following for their arty pretentions, although just as many of them are cheaply made. (A full list of Jess Franco’s other genre films is at the bottom of the page).

Franco made Attack of the Robots relatively early in his career (it was something like his eleventh film) and appears to have a slightly better budget than usual. It is a French production but Franco manages to get everybody to Spain early in the show and keeps the action (of which there isn’t much) there for the duration. Franco has clearly been given orders to go away and make a film in the era’s prevailing fad for spy movies after the popularity of the James Bond series (although this may well be the only spy movie that was shot in black-and-white).

The film’s chief drawcard is French actor Eddie Constantine who gained fame during the decade for playing hard-boiled detective Lemmy Caution in a series of eight French films beginning with This Man is Dangerous (1953) – the most famous of these was Jean-Luc Godard’s Alphaville (1965). Here Constatine is playing a different character who is an Interpol agent rather than a detective but is cast as Lemmy Caution in all but name – this is a spy who goes into action wearing fedora and shabby raincoat. On the other hand, the English-language dubbed version I saw outfits Constantine with a British accent that doesn’t suit the character at all.

As spy films go, Attack of the Robots is not terribly interesting. A sequence with dead bodies accidentally turning up all over a hotel room gives the impression that Franco was trying to make a comedy. The main problem is Jess Franco as a writer – certainly, the dialogue had a polish from the celebrated French screenwriter Jean-Claude Carriere known for his work with Luis Buñuel. Once Franco gets everybody to Spain, the intriguing initial set-up grinds to a halt and the plot involves everybody running back and forward between various locations without ever progressing beyond that. I also failed to find a coherent line of reasoning to the deductions made by Interpol at the start that connect the robots to the abducted persons and the discovery that they all have RH- blood type and how this necessitates going to a Spanish seaside town.

The other issue with the film is the title Attack of the Robots. (The original French title Cardes sur Table translates as ‘Cards on the Table’, which has about as much connection considering that no card games are depicted). When it came to English-language release, someone clearly sought to push the film as science-fiction rather than a spy film. Unfortunately, the script never makes clear what the ‘robots’ are. We see humans being placed into glass cylinders as electricity flickers around them. However, in that they are all people with a certain blood type, it is clear they are not machines but still human. With the spectacles that control their action, what we have seems more of a mind control that a killer robot film. The robots also have the novelty effect of being able to change their skin colour, although it is never explained why this occurs or to what purposes.