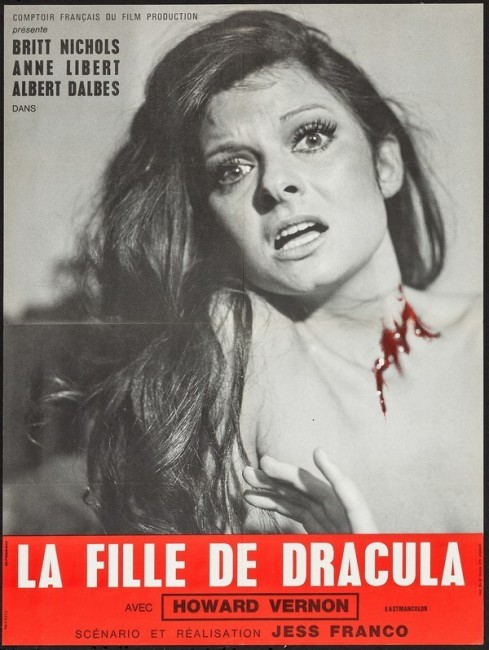 Luisa Karlstein is called to the bed of her dying Aunt Edith at Castle Karlstein. Before she dies, Edith tells Luisa that the Karlsteins are a family of vampires and that her ancestor, the original Count Karlstein, lies buried in the crypt. Afterwards, Luisa goes and finds the count’s coffin and discovers that he is undead. As she takes Karine as her lover, a police inspector investigates a series of killings around the town, dismissing the locals who insist these are being caused by vampires.

The late Jesus or Jess Franco (1930-2013) is considered the world’s most prolific director. Between 1957 and 2013, Franco directed a purported 199 feature films. Many of these exist under a labyrinth of alternate titles and different cuts. Franco’s most prolific heyday were during the late 1960s to the mid-1970s. During this period, he was producing easily six to eight films per year. His output covered a great many different genres from thrillers, spy films and science-fiction but most of all horror and erotica/pornography. Franco’s films have attained a certain cult following for their arty pretentions, although just as many of them are cheaply made. (A full list of Jess Franco’s other genre films is at the bottom of the page).

The Daughter of Dracula was made around the peak of Franco’s career in the early 1970s. The title is a misnomer in that there is nobody of the Dracula family present in the film. Franco regular Howard Vernon does turn up in a few scenes dressed in a red-lined cape just like Christopher Lee but is named Count Karlstein rather than Dracula. It need not be said that the film is unrelated in any way to the similarly titled Universal sequel Dracula’s Daughter (1936).

It seems more than evident that Jess Franco was trying to emulate the Hammer films. The Christopher Lee Dracula films were at their peak of popularity when The Daughter of Dracula was made. Moreover, Hammer had just made their trilogy of lesbian vampire films – The Vampire Lovers (1970), Lust for a Vampire (1971) and Twins of Evil (1971). Franco seems to have primarily set out to copy these, featuring the Karlstein as opposed to Karnstein family and showing extended scenes of Britt Nichols engaged in lesbian trysts with Anne Libert.

On the other hand, The Daughter of Dracula is moribund as a horror film. Franco is distracted by his erotica and seems barely interested in the vampire element. Howard Vernon is introduced as the Dracula lookalike but the film keeps him in the crypt for the entire running time, sitting up in his coffin whenever Britt Nichols visits and only once emerging from it to attack a victim. Indeed, there are only two scenes of him in the crypt during the entire first hour of the film. The rest of the show is taken up by the girl-on-girl erotic scenes with some cutbacks to the detective (Alberto Dalbes) investigating a series of murders around the town, which never amounts to much.

Franco also makes one of his most substantial acting appearances in the film, playing the character named Cyril Jefferson who wears glasses and has wispy shoulder-length hair. In the end scenes, we realise that he is meant as the vampire hunter of the show – although this never seems to have consisted of much more than him sitting around cafes giving dire pronouncements in a languid way. Franco also writes himself some of the most ridiculously overwrought dialogue: “Death will rise triumphantly when the moon rises … Unfortunately no-one has the power to still the flight of the blood-drinking birds of darkness.”