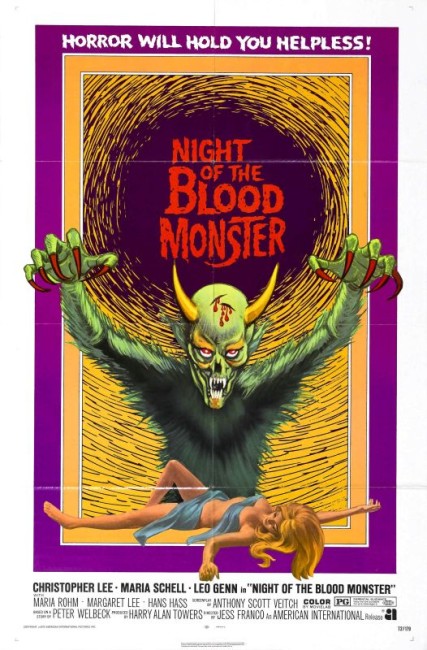 England in the year 1685 under the rule of King James II. Judge Jeffreys is the Lord Chancellor and is notorious for the cruelty conducted by his torturers and the ruthlessness of his judgements in court. Jeffreys sentences Alicia Gray to death on charges of witchcraft. It comes to Jeffreys’ attention that Alicia’s sister Mary, whom he also suspects of witchcraft, is consorting with Lord Wessex’s son Harry Sexton. Jeffreys ruthlessly pursues Mary. However, in bringing Mary under his control, Jeffreys becomes prey to feelings of lust for her. At the same time, Harry falls into the company of rebels and determines to raise a revolution against the Crown.

The Bloody Judge was one of the films in the lengthy and amazingly prolific career of Spanish exploitation director Jesus or Jess Franco. Jess Franco directed 1999 films and touched upon numerous genres in a career that has stretched from the 1950s to the 2010s – he was still making films at the age of eighty just before his death in 2013. More often than not, Jess Franco’s work ventures into horror and the erotic and comes with a strong Sadean influence – his films regularly feature scenes of women being tortured. (A full list of Jess Franco’s genre films is at the bottom of the page).

The Bloody Judge was made not long after the success enjoyed by Michael Reeves’ Matthew Hopkins – Witchfinder General (1968), which offered a brutal and cruel portrait of the 17th Century English witch hunts (and was based on a real-life historical figure). A number of continental films jumped aboard the success of Witchfinder General, depicting usually fictional scenarios and featuring a catalogue of scenes with witches being tortured.

Unlike most of these other Witchfinder General copies, The Bloody Judge is set around a real historical character – George Jeffreys (1645-1689), the Baron of Wem. Jeffreys became the Lord Chancellor under the Catholic King James II, where he was nicknamed ‘The Hanging Judge’ and gained a reputation for the cruelty of his sentences. Jeffreys was foul tempered and often known to be drunk in court. He required that all prisoners brought before him plead guilty and would usually sentence them to be hanged immediately depending on his mood. He was a party to the infamous Bloody Assizes following The Monmouth Rebellion of 1685 that unsuccessfully attempted to unseat King James, in which he sentenced some 600 conspirators to hang. Unlike what is depicted in the film here, Jeffreys died a prisoner in the Tower of London in 1689 where he had been held under arrest following the deposing of King James.

Invariably in Jess Franco’s hands, the historical story of Judge Jeffreys is dragged down towards Franco’s usual sado-pornographic proclivities. We get scenes in which half-naked women are stretched on a rack until they bleed, of them being branded or where a saw blade is placed against the neck of a woman with a low-cut neckline. There is a parade of dungeons – at one point, we see a montage of scenes of women with their hands nailed in a spiked trap, being lashed, placed in stocks and their hands being hacked off; or a scene where one woman has been lashed, bloodied and hung from her wrists as another is made to lick her body while the guards look on.

Outside of Jess Franco’s characteristically lurid proclivities, The Bloody Judge proceeds like a standard historical costume drama. Franco’s direction, when he is not coming up with scenes of torture and nudity, is largely pedestrian and the film is surprisingly dull overall. To his credit, Franco appears to have a reasonable budget to hand. There is fine colour photography and some good sets – Franco even manages to stage several battle scenes between armies.

Jess Franco has even managed to employ Christopher Lee who appeared in several other Franco films around 1970-1. Lee was trying to shake his typecasting as a horror actor and was drawn to the role of Judge Jeffreys because of his interest in history. However, Lee and Franco differed widely over how the film was interpreted – Lee wanting to make an historical account, Franco perverting the historical story toward his typical sado-pornographic scenes. There are clearly occasions where Franco has shot scenes with Lee and then gone away afterwards and added more material to spice them up. This is most evident in a scene where Judge Jeffreys forces himself on Maria Rohm where we simply see a pair of anonymous hands caressing Rohm’s naked body and Lee’s voice on the soundtrack but not Lee’s face. (It is typical of Jess Franco’s focus that the scene where Jeffreys forces himself on Maria Rohm is not a moment where we see the judge’s vicious hypocrisy but rather a scene where it is just Franco offering up another in his catalogue of sado-sexual atrocities). This conflict resulted in Christopher Lee’s having refused to see the finished film.

One of the more amusing things about The Bloody Judge is the number of alternate titles that it has circulated under. In the US, the film was retitled Night of the Blood Monster and released by AIP with a blatantly misleading poster that tried to turn it into a monster movie and capitalise on the name of Christopher Lee despite there being no monsters in the film. In Germany, the film was retitled Der Hexentöter von Blackmoor (The Witch Hunter of Blackmoor) in an attempt to capitalise on Witchfinder General, as well as the success of the earlier Edgar Wallace mystery thriller The Strangler of Blackmoor (1963).

Jess Franco later recycled the character of Judge Jeffreys as a witchfinder (played by John Foster a pseudonym for French actor Cihangir Gaffari) in The Demons (1972).