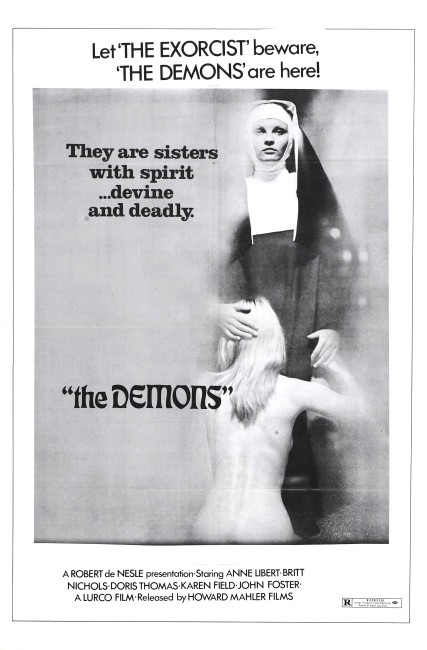 England during the 17th Century. A witch is burned at the stake and dies cursing those who condemned her. Lady De Winter, one of the chief accusers, sets out to find the witch’s relatives. Sisters Kathleen and Margaret have been raised in the Blackmoor Nunnery since they were children. Kathleen confesses that she has been having intensely erotic dreams. Margaret and the Mother Superior think that this maybe means that she is possessed. Lady De Winter comes and determines that the two sisters are the witch’s daughters. When Kathleen confesses about her dreams, Lady De Winter demands that she be placed to the torture to determine if she is a witch. Both Lady De Winter and the soldier Thomas Renfield admit desire for Kathleen and he frees her. As the two sisters leave the convent and set out, both along their own paths, they realise that they are destined to enact their mother’s revenge.

Spanish director Jesus Franco – who was commonly anglicised as Jess Franco (that is when he wasn’t hiding behind a host of pseudonyms, including here that of David Khunne on whose novel the film is supposedly based) – was the world’s most prolific director. Between the late 1950s and his death in 2013, Franco made 199 films. He worked in numerous exploitation genres throughout his career, including horror, science-fiction, spy films and historical dramas, although his most prolific output has been in the arena of horror and softcore erotica. (See below for a full list of Jess Franco’s other genre films).

It is more than apparent that Jess Franco conceived The Demons not long after Ken Russell’s The Devils (1971) came out. The Devils was a sensationalistic take on the witchfinder theme that gained prominence a few years earlier with the success of Michael Reeves’ Matthew Hopkins – Witchfinder General (1968). The Devils concerned a true 17th Century incident where the Catholic Church determined to punish what it believed was an outbreak of possession at a convent in France. Russell’s frequently blasphemous depiction of the sexual hysteria caused a sensation and had the film banned in some areas. The similarity between the two films seems obvious in the choice of titles – The Devils/The Demons. Only, where Ken Russell was depicting a true historical incident and letting loose with typically schoolboyish outrages, Jess Franco does no more than create another of his works of softcore erotica. Franco is probably the only director who could take a story about nuns being tortured and witches burned at the stake and turn it into a work of erotica.

There is also something hypocritical about Franco’s take on things. His indifference to the moral issues that drive The Devils is surely indicated in that he cannot ever seem to decide if the two sisters here are persecuted innocents or are actual witches being seduced by The Devil and others into enacting their mother’s vengeance against her persecutors – the film has them as both depending on what suits a particular scene. Not to mention that the evidence offered of any possession is on the dubious side – at the start, the determination of Anne Libert’s possession is based solely on one of the other nuns’ seeing her masturbating.

Plots were never a strong suit for Franco. After starting off with the persecution of the two sisters by witchfinders, the film trails off once the two sisters leave the convent. Here there is never much more than a sense of things happening as they pass from one encounter to the next where crucially there is no real momentum to the plot. The latter half of the film peters off into nothing terribly interesting happening.

The Demons has been seen in a variety of cut versions. The full original restored version runs to 103 minutes, although this has been cut of anything up to twenty minutes in the US release and other versions. One of the oddities of the film is that Franco has made it as a sequel of sorts to his earlier The Bloody Judge/Night of the Blood Monster (1970) and features a continuation of the historical character of the tyrant Judge George Jeffreys who was played by Christopher Lee in the earlier film. John Foster (a pseudonym for French actor Cihangir Gaffari) takes up the role here. Clearly, continuity is not a big issue for Franco as both films feature two entirely different deaths for Jeffreys.