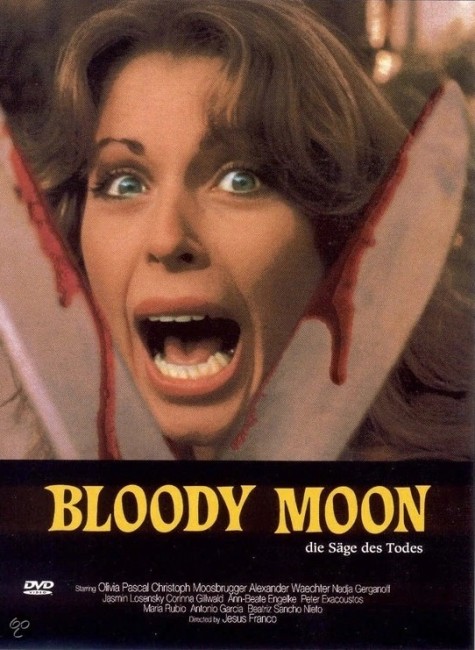 Manuela Gonzalez collects her disfigured brother Miguel from the asylum where he was confined after killing a girl. She brings him back to where she lives at the Spanish-teaching school run by her aunt, the Countess Maria. Someone then starts stalking the girls at the school. Angela, one of the pupils, discovers the body of her friend Eva in her room, having been stabbed through the breast. However, when she tries to alert people, the body has vanished. As Angela searches for Eva, the killer begins eliminating other girls at the school.

Spanish director Jesus Franco – who was commonly anglicised as Jess Franco (that is when he wasn’t hiding behind a host of pseudonyms) – was the world’s most prolific director. Between the late 1950s and his death in 2013, Franco made 199 feature films. He worked in numerous exploitation genres throughout his career, including horror, science-fiction, spy films and historical dramas, although his most prolific output wasin the arena of horror and softcore erotica. (See below for a full list of Jess Franco’s other genre films).

Bloody Moon was Franco’s venture into the slasher film that was overrunning the horror genre around this time. The slasher films bad been kicked off with hits like Halloween (1978) and Friday the 13th (1980), which led to a massive industry of sequels and imitators. (For an overview of the genre see Slasher Films). Franco has adopted many of the tropes of the genre – a Spanish-language school rather than the usual summer camp or sorority house – although the denouement reveals that he still has one foot in the psycho-thriller plots of the 1960s and 70s.

Like most slasher films, Bloody Moon consists of not much more than a parade of novelty deaths. Only a couple of these stand out – one scene where Ann-Beata Engelke is stabbed from behind and the knife emerges out through her breast; the other where Jasmin Losensky’s severed head turns up in the bed. The one scene that works with an imagination is where Olivia Pascal is in class listening to the language tutorials on headphones and a voice comes whispering that they are going to kill her – it is a surreal scene that is never given any explanation but one that you could easily imagine seeing in a Dario Argento film.

The gore scenes caused some censorship controversy. The film was listed as a Video Nasty in the UK, which removed 1 minute and 20 seconds – consisting of the gory detail of most of the murders. The film proliferates around the world in a variety of cuts that range between 84 and 90 minutes.

Jess Franco’s films were quickly made and deficient in many regards. When Franco did what he did well, he could produce films that came with a colourful erotica and surreal sado-sexuality. Bloody Moon is not one of them. For all the controversy the film accrued, not much happens in it. There are lots of scenes of the girls running around the school, some of them occasionally being killed off but it all feels rather listless in its development. It should also be pointed out that though there are occasional cuts away to the full moon, it and the title is of no relevance to the story.