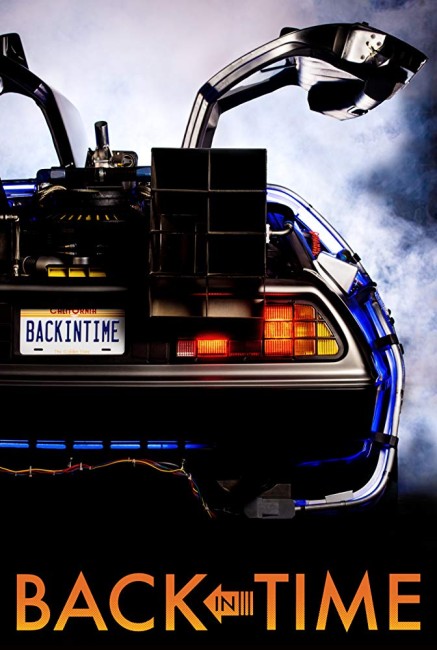 The film comes in four sections. The first and most interesting of these is the first quarter of the film that deals with the making of Back to the Future. Jason Aron gets face time with almost everybody involved with the first film – Michael J. Fox, Christopher Lloyd, Lea Thompson and quite a few of the bit actors, as well as director Robert Zemeckis and executive producer Steven Spielberg. The most prominent interviewee throughout is screenwriter Bob Gale who one gathers was also instrumental in helping back the documentary. The only noticeable absentees are Crispin Glover and Thomas F. Wilson.

We learn much in the way of the origin of the film. Steven Spielberg talks about his friendship with Robert Zemeckis – we learn that he, Zemeckis and John Milius, the director of Conan the Barbarian (1982) and Red Dawn (1984), used to go skeet shooting together, which kind of makes the mind boggle with the diversity of the creative talents involved.

Almost everyone interviewed calls Back to the Future the perfect script. Bob Gale principally discusses the difficulty of getting it sold at a time when nobody seemed interested in making time travel films. One of the more interesting facts that comes out is how the original climax of the film featured Marty surviving the detonation of a nuclear reactor by climbing inside a lead-lined fridge, something that was later rehashed by Spielberg as the notorious ‘nuke the fridge’ scene from Indiana Jones and the Kingdom of the Crystal Skull (2008).

Some time is spent on the original casting of Eric Stoltz and his subsequent firing – which is stated by Robert Zemeckis as being because he wasn’t hitting the comedy scenes right – and the film manages to even unearth some footage of these scenes as well as a number of stills of Stoltz in the role of Marty.

What is noticeable is how all of the principals have gotten older, excepting Christopher Lloyd who looks no different now as he did back then. (The great surprise about this is that the film at no point ever attempts to contrast shots of the actors as they look in the real 2015 with how their characters are made up to look in the film). Perhaps the saddest of these is Michael J. Fox, now in the clearly advanced stages of Parkinson’s and having to constantly catch his arms as they are given to random movements. Nevertheless, Fox is also the wryest and wittiest of the interviewees – he, in particular, delivers a side-splitting anecdote about having to sit beside Princess Diana at the Royal Premiere of Back to the Future in London.

Less interesting are the second and third sections where Jason Aron spends nearly half of the film dealing with the fans, the conventions, the merchandising and especially the people engaged in the restoration of the original DeLorean at Universal Studios, as well as a bunch of other car collectors and their various DeLoreans. The details of the DeLorean restoration are in all honesty only interesting to a small number, as are the scenes spent with people who have bought other of the original vehicles, even though these sections take up the bulk of the film. We visit some of the conventions and fans.

This is of mild interest but fails to find much that is of interest about them and their lives – in say the way that Trekkies (1997) and Trekkies 2 (2004) did with Star Trek fans. It may be just that Back to the Future is not as widespread a fandom as Star Trek and Star Wars or that Jason Aron didn’t have the budget to visit many locations and talk to as many people. There are times the film feels strained in trying to make a case for relevancy – while the scenes of how Marco Pasqua was inspired by Michael J. Fox’s Parkinson’s to become a handicapped athlete is a touching story, it has no direct relevance to Back to the Future and its fandom.

When it comes to Back to the Future Part II, almost all of this centres around discussion of the technological innovations. Zemeckis makes the statement that they “got about fifty percent right” and the film does briefly list some of these – in particular the idea of a flying car and the hoverboards. (Although part of me tends to think that this has been over-emphasised – many of the innovations in the film were predicted decades earlier by other works of literary science-fiction, which gets no recognition, while the flying cars had been conducted on screen only a few years earlier in Blade Runner (1982) and before that Disney’s The Absent-Minded Professor (1961), whereas the impression you could come away with here is that Back to the Future series was the first film to come up with the idea).

We visit various companies and individuals who have been trying to build and market flying cars and hoverboards – although in both cases the real-life inventions come out as far more cumbersome than the ease with which their fictional rivals are shown as operating. (One of the more amusing comments is Robert Zemeckis on how difficult the hoverboard sequence was to shoot in the pre-CGI era and we get brief behind-the-scenes footage of the actors on wires).