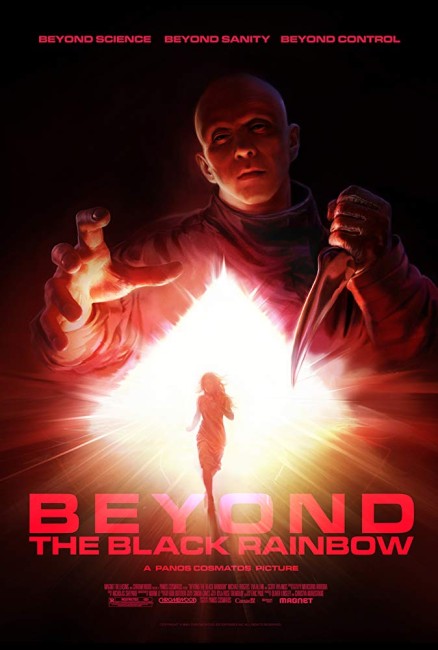 It is 1983. Dr Meruciro Arboria has set up the Arboria Institute that promises renewal of the body and mind. The institute’s director Barry Nyle subjects Elena, a young woman imprisoned there, to a series of experiments.

Beyond the Black Rainbow was the debut feature for Canadian director Panos Cosmatos. Panos Cosmatos is son of the late George Pan Cosmatos, director of works such as the disaster film The Cassandra Crossing (1976), the classic giant rat film Of Unknown Origin (1983), the monster movie Leviathan (1989) and Tombstone (1993) – in particular, being known for the Sylvester Stallone action hits of Rambo: First Blood Part II (1985), Cobra (1986) and Rambo III (1988). Beyond the Black Rainbow did the rounds of film festivals where it received a wildly mixed response.

In an interview, Panos Cosmatos tells how his inspiration for the film came growing up in the early 1980s where he was forbidden to watch science-fiction films but was fascinated by looking at their posters and box covers in videostores and in so doing constructed his own version of what he imagined them to be. This clearly fed into Beyond the Black Rainbow, which feels like a forgotten artefact from 1970s/80s science-fiction cinema. Indeed, the setting seems so important to Panos Costmatos that the date 1983 is the first thing that appears in giant screen-filling letters before the film even starts.

The design scheme has been closely modelled on the futuristic look that became all the thing after films like 2001: A Space Odyssey (1968), The Andromeda Strain (1971) and THX 1138 (1971) – plastic vacuform furniture, rooms in antiseptic white and panels of chromium, not to mention mysterious glowing cubes and pyramids of arcane purpose. The film is lit in washes of colour saturation that seem to overwhelm the screen like red emergency lighting. The score is a mix of synthesizers and prog rock just like the SF films from the era.

There are a good many scenes and pieces packed away that homage genre films from this era – at one point, Eva Allen discovers her psychic potential and causes a nurse (Rondel Reynoldson)’s head to explode a la The Fury (1978) and Scanners (1981); there is a suicide booth with projected landscapes (here faded documentary footage of travel resorts) as in Soylent Green (1973); a long sequence of trippy psychedelics that became a cliche in the era after the climactic scenes of 2001; and when Michael Rogers takes off his wig, he comes out resembling one of the shaven headed figures out of THX 1138. The final credit for the film is the famous quote from The Adventures of Buckaroo Banzai: Across the 8th Dimension (1984) – “wherever you go, there you are.”

I give most films the half-hour test – where (unless I am writing about it), I will switch off if it fails to at least give me some clue what it is about or where it is going during that time. By the half-hour point, Beyond the Black Rainbow has not even gotten beyond scenes of Michael Rogers wandering around the corridors of the institute and Eva Allen in her cell. Indeed, by this token, the film fails to even make the 90 minute rule. Most of it seems to consist of endless closeups, slow shots of people walking down corridors and fades into colour saturation.

Panos Cosmatos fails to give us any idea what is going on by the end. There is nothing explained as to what the experiments at the institute are about – something to do with psychic powers, creating advanced humans and/or mutants. There are cryptic hints littered throughout but none of these ever coalesce into a plot. In the aforementioned Scanners homage, Eva Allan causes a nurse’s head to explode while Michael Rogers looks on with a satisfied smile but why and what is happening is never referred to again. There is a 2001-esque trip through psychedelic space that goes on for several minutes, which is pretty, but you are never given the slightest idea how it connects up to anything else in the film.

At the climax, Eva Allan makes an escape from the institute where she is pursued by Michael Rogers who reveals that he is a mutant/advanced human of some type and suddenly develops green glowing eyes, before she accidentally kills him and then makes her way to freedom. You have the feeling should have been a significant breakthrough scene but it is an ending that only produces a confused “huh” from the audience.

What Panos Costmatos does not seem to get is that while science-fiction films of the 1970s and 80s created trippy light shows and antiseptic worlds of the future, in all cases they were design schemes that were employed in the services of ideas – the light shows were an ache for achieving a breakthrough into transcendental headspace, the antiseptic design schemes represented a world of technology triumphant and where humanity was a dirty infection amid its clean perfection.

Beyond the Black Rainbow feels not dissimilar to the recent French Eden Log (2007). In both cases, they are homages to 1960s/70s SF cinema made by filmmakers who have appropriated the feel of the era but seem concerned entirely with the look and surface detail but have forgotten in the midst of this the one crucial element that drove 1970s science-fiction – a coherent plot or set of ideas. As such, Beyond the Black Rainbow feels like a piece of deconstructionist art – where the popular symbols of a previous era are taken by an artist and used divorced of any context. What we have is a film that is all look – all psychedelic light shows and antiseptic futures – that sits in service of precisely nothing beyond the look itself.

Beyond the Black Rainbow should not be confused with and is otherwise unrelated to the excellent Rosanna Arquette medium film Black Rainbow (1989).