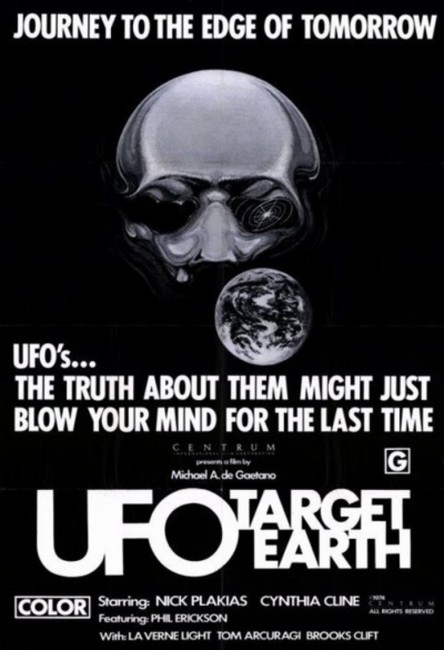 After accidentally intercepting a military phone call, Alan Grimes, a teaching assistant at the University of Gainesville, becomes obsessed with UFOs. He recruits the help of Vivian, a girl who has psychic hunches, and they are drawn to the Buford Power Project and nearby lake. With equipment borrowed from the university, Alan sets up a monitoring station on the shore to observe the strange phenomenon beneath the lake.

Interest in UFOs peaked in the 1970s. The flying saucer phenomenon had been around since 1947 but it was during this decade that it took off in a big way. The US Air Force’s study Project Blue Book was decommissioned in the late 1960s, there was the rise of people studying the phenomena seriously such as J. Allen Hynek and Jacques Vallee, along with crackpots like Erich Von Daniken and his claims that major archaeological landmarks were created by alien visitors – see the documentary Chariots of the Gods (1970) – and a host of other populist books about experiences and phenomena. Even President Jimmy Carter claimed to have seen one. This was also the decade where weirder aspects of the phenomenon began to emerge such as people’s claims to have been abducted by aliens and their memories wiped, as well as the first UFO religions.

UFO: Target Earth was one of the first films to dramatically deal with UFO phenomena. While flying saucers had appeared in the occasional 1950s film such as The Day the Earth Stood Still (1951), Earth Vs the Flying Saucers (1956), Invasion of the Saucer Men (1957), The Mysterians (1957) and Plan 9 from Outer Space (1959), the only non-alien invader effort to deal with UFOs was the documentary Unidentified Flying Objects: The True Story of Flying Saucers (1956), as well as The Flying Saucer (1950) where the saucer was revealed to be a terrestrial flying machine caught up in the midst of a Communist plot.

In the 1960s, interest in UFOs of the alien invader variety had gravitated to tv series such as The Invaders (1967-8) and UFO (1970-3). The sudden renewed interest in UFOs in the real world suddenly brought a host of documentaries on the subject all at once – UFOs: Past, Present and Future (1974), Mysteries from Beyond Earth (1975), The Outer Space Connection (1975) and Overlords of the UFO (1976), as well as the popular tv movie The UFO Incident (1975) dramatising the first claimed alien abduction experience – all leading up to the mass appeal enjoyed by Steven Spielberg’s Close Encounters of the Third Kind (1977).

Among these, UFO: Target Earth was the first film to treat UFO phenomena in a serious, fictional non-alien invader context. Certainly, there is much about its treatment that raises an eyebrow watching it after forty years. Nick Plakias manages to accidentally overhear a military conversation about the phenomenon and then goes to talk to the General Brooks Clift who insists that such unmonitored conversations wouldn’t happen and then proceeds to do nothing whereas any modern post The X Files (1993-2002, 2016-8) UFO film would immediately have sinister government agents following Plakias and breaking into his house to remove all evidence etc etc. The phenomena are centred around a dam and power plant project where you keep expecting there to be the unveiling of some type of top secret government project but this never happens.

The other oddity is that despite being a film about UFOs, none appear throughout apart from various photographs and slides that are shown to illustrate the discussions. You do have to commend director/writer Michael A. De Gaetano as he makes a respectable attempt to examine the phenomenon – albeit one that also involves the use of a psychic to track key information – and there are several scientific discussions about it from the academic characters, including even one peculiar aside where Ed Lynch jumps aboard the von Daniken bandwagon and starts speculating about whether the Biblical story of Jonah and the Whale was an alien abduction experience.

The main problem with UFO: Target Earth is that it is uninteresting. It is extremely dull and talky. The dialogue frequently feels stiff and awkward in the mouths of the cast. Mind you, you try voicing lines like “Could that be the metaphysical mind of your companion?” or “I find that you are trying to bind my soul with your technology.” There is an early electronic score, even songs on the soundtrack. The substantial trouble with the plot is that it is unfocused – it is never clear right until the end what is happening in the lake or even how it is, other than Cynthia Cline’s psychic hunches, that Nick Plakias determines that something is there.

And then there is the extremely weird ending. [PLOT SPOILERS]. After setting up equipment on the lakeshore, Plakias stares obsessively at oscillation patterns on a monitoring screen and then begins to hear a voice calling to him out of it, talking some nonsense about needing a sacrifice from him in order to prevent the end of the world. In an ending that feels as though Michael A. De Gaetano had watched 2001: A Space Odyssey (1968) too many times, Pliakas walks to the lake, aging as he does so. He finally disappears beneath the waters as the screen breaks into some 2001-styled light patterns.

UFO: Target Earth was the first film from Michael A. De Gaetano. It was not successful or widely seen in its day. Nowadays it is in public domain and can easily be found floating around the internet. De Gaetano never went onto anything else of significance. He did direct two other films with the supernatural retribution film Haunted (1977) and the basketball comedy Scoring (1979) but these were not successful either.