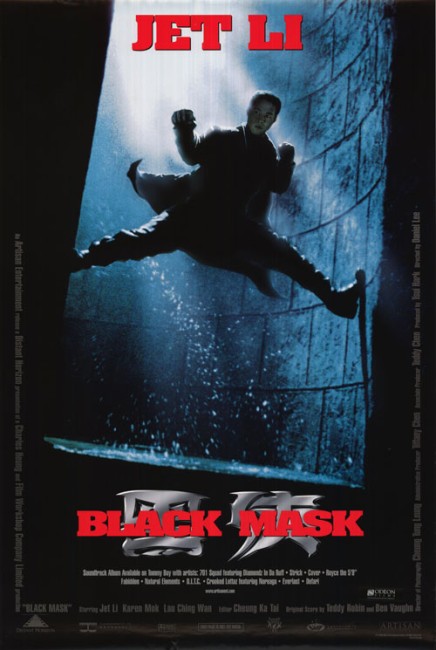 Simon is a member of the 701s, an elite fighting force that have been genetically engineered to feel no pain. Making an escape from the squad, Simon renounces violence and takes a job as a librarian. Some years later, his good friend Inspector Rock investigates a series of killings of drug lords and Simon realises that 701 tactics are being used in the killings. In order to protect his identity, Simon dons a black mask and goes into battle to stop the 701s, something that places him up against the 701 woman he once loved.

Hong Kong action star Jet Li made a crossover success into American mainstream cinema with Lethal Weapon 4 (1998). As a result of Jet Li having become a recognisable name in the West and a subsequent mainstream action star, his earlier Hong Kong films were resurrected and granted the same treatment that a number of Jackie Chan’s films – Twin Dragons (1992), First Strike (1996) and Drunken Master 2 (1994) – were in the late 1990s/early 00s in being dubbed with an English-language soundtrack, given a new score and a top drawer promotional campaign and being passed off to unaware mass-market audiences as new films from that particular star. Arthouse audiences had earlier seen a subtitled version of Black Mask but in 1999 US multiplex audiences saw this dubbed version.

There is a good deal of mindlessly enjoyable fun to Black Mask. It falls into the masked superhero genre but quickly transforms into an all-out action film, a la the material usually associated with Chow Yun Fat and John Woo. The title superhero seems to have been modelled on Bruce Lee’s first success in English-speaking countries in the role of the manservant Kato in the tv series The Green Hornet (1967).

The plot is conducted with a bare minimalism that exists for the sole purpose of connecting action sequences. These are, as is usually the case with Hong Kong action films, frequently breath-taking – the hero shooting down hordes of attackers while spinning in mid-air on a winch platform or allowing himself to be dragged behind a riderless motorcycle; martial arts combat hopping around gravestones or in mid-air around the outside of pylon; and a climax with the hero and villain taking one another on whipping about an electrical cable.

Jet Li gets some nifty comic-bookish poses in costume, although once the mask comes off he looks decidedly unhandsome and unheroic. Karen Mok is one of the irritatingly cute and screeching airhead female leads that seem to occupy Hong Kong films but Francoise Yip has breathtaking allure. This is a film that makes no pretensions to being anything other than it is – a full tilt Hong Kong action film – and as such succeeds quite enjoyably.