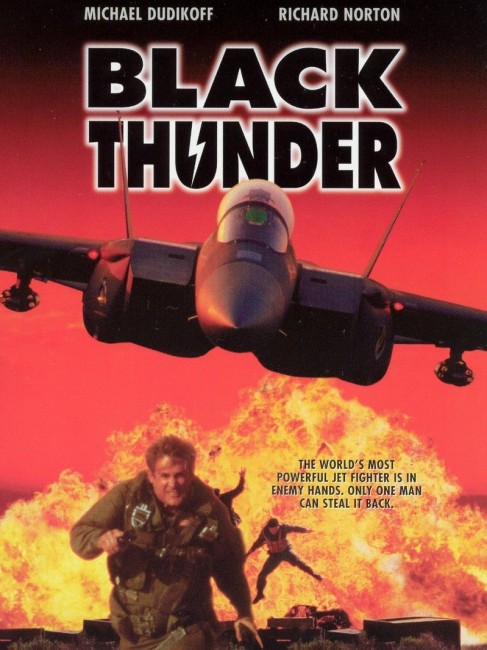 The US Air Force is conducting tests on a prototype of the Nova, nicknamed the Black Thunder, a fighter plane that can become invisible to both radar and human sight. However, the Black Thunder’s pilot Captain Nick Moore is shot and his place taken by an impostor. The impostor then steals the plane and flies away to join a terrorist organisation in Libya. General Barnes, the head of the project, recruits top pilot Vince Conners to go and retrieve the Black Thunder. Setting down in the Libyan Desert, Conners must single-handedly stop the terrorists as they plan to use the Black Thunder to undetectedly drop a viral weapon over Europe.

Black Thunder is a direct-to-video action film made as a co-production between Roger Corman’s Concorde-New Horizons combine and former actor Andrew Stevens’ Royal Oaks Entertainment. Royal Oaks in particular have specialised in a great many low-budget films that often recycle stock footage of the armed services in action.

Black Thunder emerges as a blatant copy of foregoing hi-tech plane films, in particular Clint Eastwood’s Firefox (1982) about an ex-pilot being recruited to go into a foreign country and steal a radar invisible plane. The title itself pays homage to the hi-tech helicopter film Blue Thunder (1983), although the plot of a test pilot stealing the hi-tech plane and flying it off into the service of Libya and of an ex-pilot being recruited to steal it back has been blatantly stolen from Airwolf (1985), the cinematically-released pilot of the tv series of the same name.

Black Thunder is routine in most respects. The one plus is that it does feature some excellent footage of gleaming planes flying through the sky, refuelling, in their hangars and taxiing down the runway. Although, as the cheap optical effects used to depict the Black Thunder vanish demonstrate, this is clearly only stock footage that has been shot by someone else and not the filmmakers. The downside of this is that the entire first half of the film is dominated by stock Air Force flying footage. There is not a great deal that ever takes place during these sequences – it feels like the entire film has been padded by shots of planes flying, intercut with people talking to one another on radios.

The action, when it eventually arrives in the second half after the film touches down to the ground, is routine. There is a laughably improbable sequence where Michael Dudikoff manages to take out an entire military base armed only with a handgun. The film also lifts a metallically pounding score that has been used in several other Roger Corman films and has the irritating effect of sounding like a nail gun riveting laid over the action.

Black Thunder was later uncreditedly remade almost word-for-word as the bigger budgeted Steven Seagal film Flight of Fury (2007), even to the extent of retaining the names of characters.