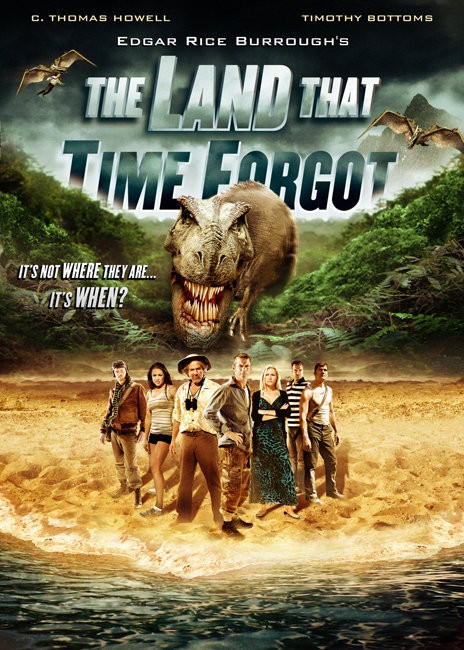 Frost, Cole and their respective girlfriends are on an excursion at sea aboard a hired launch when they are caught in a storm. The boat is drawn into a rift that appears and they pass through to emerge near an island. They go ashore to explore, only to find the island is teeming with prehistoric life, including tyrannosaurs and pterodactyls. They return to find the boat missing, along with Frost’s girlfriend Karen. They then encounter Jude Jackson who has been stranded on the island for years and realize that the rift transports people from different time periods. Jude and his friend Conrad agree to take them to where Karen is being held prisoner by the crew of a German U-boat from World War II. Jude and Conrad organize the others into an attack on the German encampment to rescue Karen, only for the two of them to use this as a distraction to steal the launch. Abandoned, the others decide they need to cooperate with the Germans for mutual survival. They come up with an ambitious plan to launch the U-boat using the plentiful supplies of oil found on the island.

The Asylum have also ventured into conducting cheap versions of classic adventure/science-fiction books that have fallen into public domain – around the same time as The Land That Time Forgot, adapted from a 1918 novel by Tarzan creator Edgar Rice Burroughs, they also made an adaptation of Burroughs’ Princess of Mars (2009). Elsewhere they have conducted their own version of H.G. Wells’s War of the Worlds (2005) at the same time as the Steven Spielberg remake came out; an adaptation of Arthur Conan Doyle’s The Lost World (1912) as King of the Lost World (2005), which was designed to exploit the Peter Jackson King Kong (2005); Allan Quatermain and the Temple of Skulls (2008), a loose borrowing of H. Rider Haggard’s King Solomon’s Mines (1885) served up as a copy of Indiana Jones and the Kingdom of the Crystal Skull (2008); and their own Sherlock Holmes (2009) at the same time as the Guy Ritchie film; versions of Jules Verne’s Journey to the Center of the Earth (2008) and 30,000 Leagues Under the Sea (2007).

Edgar Rice Burroughs wrote The Land That Time Forgot at the time when lost world fiction was flourishing, featuring stories about adventurers discovering lost cities and civilisations or prehistoric life beyond the charted borderlands of the known world. The lost world genre fairly much died off after the 1930s when the geographical closing off of most regions of the world deprived the genre of its unexplored sense of mystery. The lost world also enjoyed a brief flourish on cinema screens between the late 1910s and the 1930s, reaching its height with King Kong (1993), but little beyond that.

The British company Amicus and director Kevin Connor previously conducted a fine production of The Land That Time Forgot (1974) starring Doug McClure. Those involved went onto several other films in a similar vein, including adapting Edgar Rice Burroughs’ The People That Time Forgot (1977) as a sequel and other Burroughs lost world works like At the Earth’s Core (1976), as well as the similar Warlords of Atlantis (1978). What is noticeable about the Amicus films is that they had to backdate the era that they were set in to the Victorian/Edwardian period so that the films could still hold the same sense of adventure. Other sporadic ventures into lost world cinema, notably Disney’s The Island at the Top of the World (1974) and Peter Jackson’s King Kong, took the same approach of setting everything period. Other works such as the remake of King Kong (1976) floundered badly by trying to update the adventure to the present-day.

The Asylum’s The Land That Time Forgot bravely places the story in the present-day. They never go so far as the have the lost world (which is oddly never named Caprona) existing as an undiscovered continent but create a parallel world a la Land of the Lost (1974-7), which is arrived at via one of those laser light time warps that seem to regularly appear out of nowhere to transport ships – see also The Final Countdown (1980).

This version transports us to the lost world within the first five minutes, ditching Edgar Rice Burroughs’ and Amicus’s preamble about survivors sunken by a torpedo and capturing a German U-Boat, which took up nearly a third of the 1974 film. The Asylum version does not abandon the Germans but perfectly acceptably grafts these scenes onto the end of the film and has the survivors and Germans having to cooperate together to get off the island. This version also adds a time warp, which was not present in the Edgar Rice Burroughs book, conveniently allowing the present-day heroes to mingle with the WWII-era Germans.

The Land That Time Forgot is directed by and stars C. Thomas Howell, who has become a star of sorts for The Asylum, having appeared in eight of their titles to date. Although he had directed before, beginning with Hourglass (1996), Howell has parlayed his name to being able to direct at the same time as star in several of The Asylum’s titles with The Day the Earth Stopped (2008) and War of the Worlds 2: The Next Wave (2008).

Certainly, The Asylum appear to have thrown a little more than they regularly do at The Land That Time Forgot. The CGI effects representing the dinosaurs are better than usual for their films. On the minus side, the staging of the sequences is still down at a B-budget level. We get sporadic appearances of a tyrannosaurus rex, a pterodactyl and an attack by an unidentified tentacle from out of a river at one point, but there is the sense that these are being thinly creatively stretched.

While these may have worked for the 1974 version, for a post-Jurassic Park (1993) film they seem distinctly lacking. They needed staging with much more dramatic flourish, which a bigger budget and more commercially minded director would have no doubt brought. Nevertheless, C. Thomas Howell does eventually pull off one exciting sequence with the group working together to bait the tyrannosaurus rex. Much of the story never seems more than a series of random wilderness encounters, although it does pick up dramatically at the point when the survivors start to cooperate with the Germans.