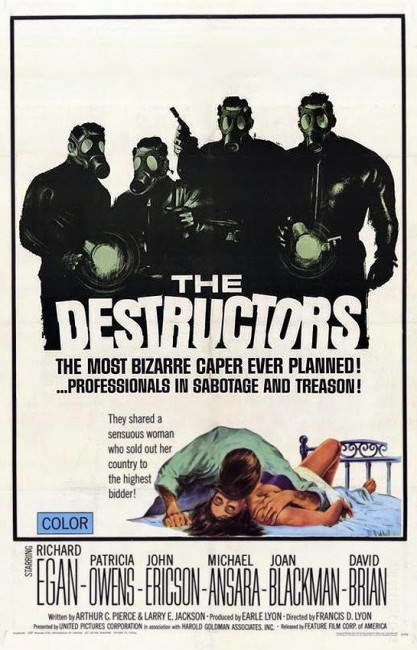 A group of thieves masterminded by bikini designer Count Mario Romano conduct a daring break-in to the Electrosphere Corporation and steal a quantity of valuable artificial rubies. Dan Street, an agent from the National Intelligence Agency, investigates. He learns that the rubies are a crucial component in The Cyclops, an ultra-powerful laser that can disintegrate objects. As he investigates, Street uncovers Count Romano’s plot to steal The Cyclops in order to sell it to Communist China.

The Destructors was one of the numerous spy films to come out in the 1960s following the massive success of the James Bond films. Unlike the majority of other films and tv that copied the Bond series – notably the Matt Helm films, the Our Man Flint films, Modesty Blaise (1966) – The Destructors is one of the few that takes itself seriously and doesn’t play everything as a giddily unreal parody. Certainly, there are moments here when it is hard not to believe that The Destructors is attempting to be campy or unserious – it is, for example, difficult not to start laughing when we meet Michael Ansara’s super-villain and then learn that he is a bikini designer (and that the film is intending this to be taken seriously).

The Destructors feels like it could easily have served as an episode of The Man from U.N.C.L.E. (1964-8), tv’s often stylish attempt to copy the James Bond films. If anything it is like a James Bond film (or Man from U.N.C.L.E. episode) that takes place on a much more dull, prosaic and certainly less glamorous level. There is very little action and what there is is directed in a pedestrian way. There is almost a laughable tameness and cosily middle-class sensibility to it.

In comparison to the James Bond films, look at the scene where Richard Egan seduces the film’s Miss Moneypenny equivalent, secretary Patrician Owens – who was also the wife in The Fly (1958). He goes to her place; she comes out to him not in her lingerie or a bikini but in a traditional nightdress buttoned up to the neck. Rather than them making out, in the next scene we see them having pillow fights and rolling around on the floor, which is the sort of cutsie thing that belongs more in a Frankie Avalon-Annette Funicello Beach Party film than a James Bond copy. In a subsequent scene, we see him sitting back having a drink while she does the dishes. Where the Bond films usually have Bond and the girl making out on a life raft or some such in the last scene, in the final image here we see Richard Egan having completed his mission and returning home to Patricia Owens’ flat just like a husband returning from a day at the office. It is surely James Bond as the domesticated playboy of the most banal and middle-class order imaginable.

The film is also hamstrung by Richard Egan, who must surely be one of the most stolid leading men to ever find employment in Hollywood. Egan was best known for roles in Love Me Tender (1956), Pollyanna (1960), as King Leonidas in the original The 300 Spartans (1962) and as the lead in one other science-fiction film Gog (1954). Alas, Egan seems horribly miscast as the suave James Bond playboy spy here. He has a stocky muscle-bound build that makes him seem like a refrigerator crammed into a suit, while he seems to have spent so much time under a sun lamp that he looks the colour of polished brass. Egan has little in the way of the charisma that Sean Connery did – the lines fall flat on his lips. When trying to play the playboy schmoozing Patricia Owens’ secretary, he only comes across as sleazy.

Though The Destructors is often reviewed as a science-fiction film because of talk about a raygun, the actual science-fiction content is minimal. Indeed, the device portrayed, which is more or less a ruby maser, was something that was well within the capability of technology at the time the film was made. What is however science-fiction is the film’s claims to amount of energy that the beam from such a weapon can put out and it having the ability to disintegrate objects.

The Destructors was one of the handful of genre films directed by editor Francis D. Lyon. Lyon mostly directed for Disney and in tv but made a handful of low-budget genre films including Cult of the Cobra (1955), Castle of Evil (1966), Destination Inner Space (1966) and one other spy film with The Girl Who Knew Too Much (1969).