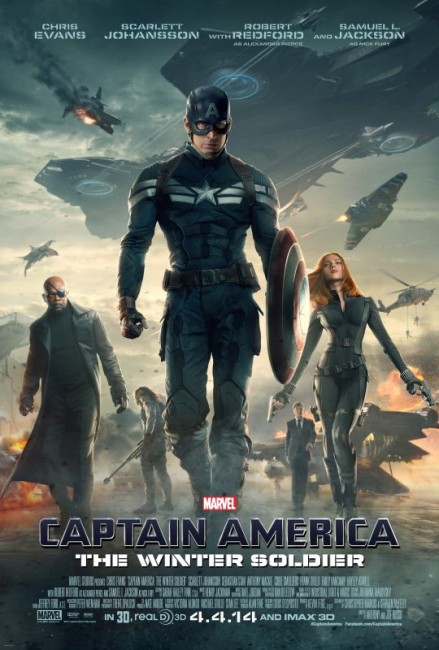 Steve Rogers heads an operation to retrieve a S.H.I.E.L.D. freighter that has been hijacked by pirates. Immediately after, a heavily armed team make an attempt to assassinate Nick Fury in the streets. He makes an escape and takes refuge at Rogers’ apartment. Fury urges Rogers to not trust anybody and gives him a flash drive just before he is shot through the window by an assassin. In the aftermath, Rogers finds himself hunted by S.H.I.E.L.D. on the orders of Fury’s superior Secretary Alexander Pierce. Joining forces with Natasha Romanoff, Rogers sets out to follow the information on the drive, which leads them to uncover a secret conspiracy of Hydra agents that have infiltrated the heart of S.H.I.E.L.D.. Rogers also finds that the mysterious Hydra assassin known as The Winter Soldier may be his old companion Bucky Barnes. He and Natasha realise that stopping Hydra’s plan to launch Project Insight, a mass surveillance operation that will be able to eliminate targets anywhere in the world, may mean having to destroy S.H.I.E.L.D. altogether.

Captain America finally received the big-budget treatment amid the Marvel renaissance with Captain America: The First Avenger (2011) starring Chris Evans. The Winter Soldier is a sequel to that film. In between the two films, Evans and Captain America went onto become a core member of the team in The Avengers and subsequently appeared in Avengers: Age of Ultron (2015), Avengers: Infinity War (2018) and Avengers: Endgame (2019), while Evans also made a cameo appearance in Thor: The Dark World (2013).

The Winter Soldier also, as is now requisite, ties back into the Marvel Cinematic Universe, and so we have a plot involving S.H.I.E.L.D., the Hydra Organisation and reappearances of Natasha Romanoff, Armin Zola and an aging Peggy Castle. There is also the introduction of several new characters from Captain America canon such as The Winter Soldier, the villainous cyborg Bucky (who was initially resurrected by the Soviets); and Sam Wilson/The Falcon (who subsequently went on to become a member of The Avengers), the first major African-American superhero in the Marvel universe; as well as Captain America’s present-day girlfriend Sharon Carter/Agent 13; a minor appearance from Georges Batroc who is usually a villain, a martial artist who goes by the improbable name of Batroc the Leaper; while one of the heavies is named Brock Rumlow who will later become the villain known as Crossbones; even a name-dropping of Stephen Strange, alias the Sorcerer Supreme Dr Strange. There are also two of the requisite post-credits scenes setting up upcoming Marvel films, in particular introducing Thomas Kretschmann’s Baron von Strucker for Avengers: Age of Ultron (2015). Around the same time, the subversion of S.H.I.E.L.D. also became a major plot element of an entire season of Marvel Agents of S.H.I.E.L.D..

The great surprise about Captain America: The Winter Soldier is just how political a film it is prepared to be. (In fact, you could go so far as to say that its willingness to do distorts it out of shape – in the comic-books, for instance, Alexander Pierce is merely Nick Fury’s aide and/or bodyguard but is here promoted to his superior and made a villainous Washington politico, while another S.H.I.E.L.D. agent Jasper Sitwell is rewritten as a Hydra traitor).

This is Marvel tackling the very topical revelations about the massive covert surveillance being wrought by US government agencies, in particular the NSA, that was brought to light by Edward Snowden in 2013. In the film, Captain America takes a stance against the introduction of Project Insight. which grants the ability to instantly surveil and eliminate enemies around the world (a not-to-subtle hint at Obama’s morally abhorrent drone assassination programme). When Robert Redford’s villain targets Captain America, he pointedly orders operatives to scan all security camera footage and internet for them, even search what is trending on Twitter. If you contrast The Winter Soldier to Iron Man, which had a weapons manufacturer as hero and was partially set in Afghanistan yet avoided any contemporary political commentary, the willingness of a Marvel film to tackle big political issues (not to mention critique the stance of the government establishment) is extraordinary.

As a film though, Captain America: The Winter Soldier disappoints. For one, it never feels like a superhero film so much as a spy/action film. There seem no superheroics outside of anything that you could find in a regular action film for about the first hour of running time and it would take very little to rewrite the various action set-pieces into sequences for a regular action movie. (Indeed, all that would be needed would be taking away the Captain America costume). The plot feels like it is made up of elements distilled from most of the Mission: Impossible films or numerous episodes of 24 (2001-10) – the hero forced to go rogue as he is hunted by his own agency; the real villain being traitorous elements in the chain of command; the enforced shutdown of the agency; the heavily armed fight for a vital McGuffin of intel. Not to mention Scarlett Johansson employing the Mission: Impossible device of lookalike facial masks.

The action sequences keep the film kinetically busy, particularly during the second half, yet there are few of them that stand out in any remarkable way – even weaker Marvel adaptations such as Iron Man Three (2013) at least have the benefit of one or more standout action sequence to their credit but there little here that is memorable. Moreover, the fact that it is a Marvel film makes it ever so predictable. Is there any real bet that the killing of Nick Fury is anything other than a ‘comic-book death’ (ie. he will be resurrected later), especially given that Samuel L. Jackson is signed up for three more Marvel films? Is there any real bet that S.H.I.E.L.D. has shut down for good?

The film makes a virtue of some striking and unusual casting. The most obvious of these is the most prominent – Robert Redford playing a villain for about the first time in his career. Aside from that, the Russo brothers bring back the lovely 70s star Jenny Agutter as a member of the council – who even gets to kick Robert Redford’s ass in a martial arts display at one point – and Garry Shandling as a corrupt politician. Even aside from that, the Russo brothers make some cute in-references – Scarlett Johansson’s WarGames (1983) in-joke “Shall we play a game?” as she boots up the computer or the epitaph on Nick Fury’s gravestone that reads “the path of the righteous man”, a reference to Samuel L. Jackson’s key role in Pulp Fiction (1994).

This was followed by Captain America: Civil War (2016). Avengers: Endgame (2019) also features characters travelling back in time and events set around the margins of this film.

The direting team consisting of brothers Anthony and Joe Russo made their first forbearance with the Marvel Cinematic Universe here. They had previously made the comedies Welcome to Collinwood (2002) and You, Me and Dupree (2006). Within the MCU, they subsequently went on to direct Captain America: Civil War (2016), Avengers: Infinity War (2018) and Avengers: Endgame (2019).