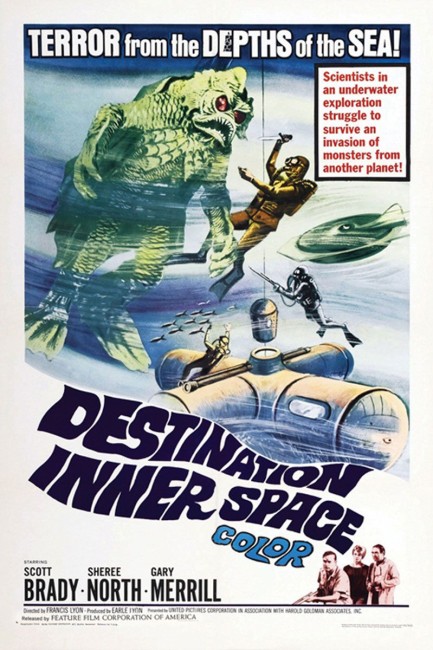 The submarine commander Wayne is brought in by the Navy to investigate mysterious happenings at the underwater scientific research laboratory Aquasphere. Strange sonar readings are reported and they then see a UFO landing on the ocean floor. They investigate the UFO and return with a strange pod. Back at the Aquasphere, the pod starts growing in size and then transforms into an alien aquaphibian that rampages through the habitat.

Destination Inner Space was one of the host of films and tv series that came out during the 1960s, exploiting a fascination with the underwater environment. This mini-fad began with the success of tv series’ like Sea Hunt (1958-61) and Voyage to the Bottom of the Sea (1964-8). Destination Inner Space is like a slightly better budgeted episode of Voyage to the Bottom of the Sea – it, for example, actually films underwater rather than in a tank.

Destination Inner Space was also the first film to try importing the basic idea of The Thing from Another World (1951) – of an alien attacking humans inside a confined space – into an underwater environment, a theme that was revisited in the late 1980s with films like Deepstar Six (1989) and Leviathan (1989).

Destination Inner Space is thoroughly routine. Dramatically, the film is dreary and dull – the scenes of the alien stalking people are mounted for almost nothing in the way of tension. The venture into the alien ship builds interestingly in a prosaic way. However, this is only there to produce the monster, whereupon the UFO is entirely forgotten about. The creature itself is at least a colourfully original looking creation. The model effects are unconvincing. The cast are stolid. An ethereally spacey score adds a moderate degree of atmosphere.

Director Francis D. Lyon mostly worked as an editor and directed several films for Disney. He made a handful of low-budget genre films including Cult of the Cobra (1955), Castle of Evil (1966) and The Destructors (1968).