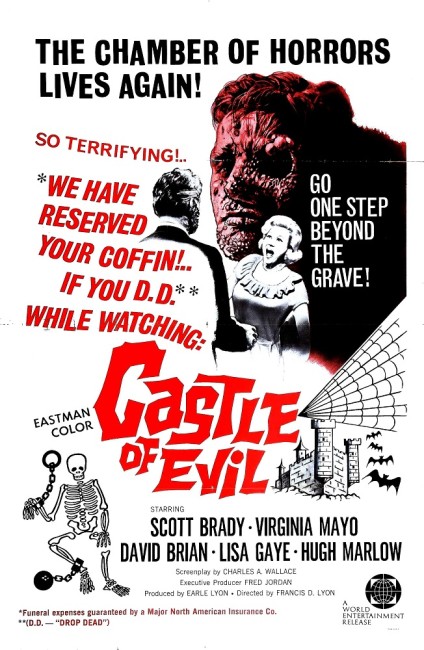 Six people are called to a meeting with the wealthy businessman Kovic at Castle Montego in Nassau. They are all people who have reason to hate Kovic for the way he has treated them. Once there, they are informed by Kovic’s maid Lupe that he is dead and are shown the body. She then announces that they have all been made the benefactors of Kovic’s will. However, Kovic believes that one of them is responsible for deliberately swapping a jar of chemicals for sulphuric acid, which ended up horribly disfiguring him after it was splashed on his face. To inherit, the others have to determine who among those present was responsible. As they settle in, it becomes apparent that Kovic has resurrected from the dead and is moving through the castle killing the members of the group one by one.

Castle of Evil is one of the films from Francis D. Lyon, a largely forgotten director of the 1960s. Lyon mostly directed for Disney and in tv but made a handful of low-budget genre films including Cult of the Cobra (1955), Destination Inner Space (1966) and the spy films The Destructors (1968) and The Girl Who Knew Too Much (1969).

At first glance, Castle of Evil seems as though it is an attempt to revive the Old Dark House genre. This was popular during the 1920s, in particular after the success of the silent The Cat and the Canary (1927). There were a great many similar films around this period, usually featuring heroines arriving at big gloomy old mansion, much skulking around the corridors and the presence of an escaped mad killer or criminal who took the name of an animal and would be revealed to be a member of the party in the improbably contrived denouement. Into the late 1930s and 40s, following the sound remake of The Cat and the Canary (1939), the genre was revived with a more comedic bent and played out in a number of efforts by comics of the era.

By the 1960s, the Old Dark House genre was regarded as old and creaky. This is one of the few attempts to revive it in colour. Castle of Evil is said to be produced by a company called National Telefilm Associates, although whether that means it was originally shot as a tv movie is anybody’s guess – it certainly received a theatrical release. It does have the look of tv shooting of the era as opposed to the shadowy black-and-white that most of the traditional Old Dark House films had.

It assembles the typical complement of characters for one of these films (or an Agatha Christie murder mystery) and places them at an isolated castle overnight for the reading of a will, during which a figure lurking in the shadows starts to eliminate various of their number. Francis D. Lyon handles the film with an adequate competence. He generates a passable atmosphere particularly during the scene where Shelley Morrison reads the will at a darkened podium and her face is abruptly occluded by the underlit face of Kovic appearing in mid-air to give a dire warning. The cast are routine, the only one who stands out being Virginia Mayo who goes for broke and gives a loud and brassy performance.

It is just when you have settled into what seems like a revival of the Old Dark House film that Castle of Evil starts to get weird. [PLOT SPOILERS]. Here the Old Dark House unexpectedly morphs into a science-fiction film. It appears that Kovic is somehow still alive and has been incarnated in a hulking robot body that has one side of its face disfigured. Quite why and how this was achieved is unclear as the explanation that Shelley Morrison makes in mid-film makes no sense whatsoever, involving her having made up the story about one of the group being responsible for Kovic’s disfigurement and they concocting the elaborate inheritance scheme before she killed Kovic and resurrected him inside the robot body and programmed to kill everybody who turns up at the mansion (including herself apparently) all in order to get all of Kovic’s money for herself. The robot kills most of the cast before a laughably obvious deus ex machina ending where Scott Brady turns an industrial laser that he just happens to find in the cellar on the robot and destroys it.