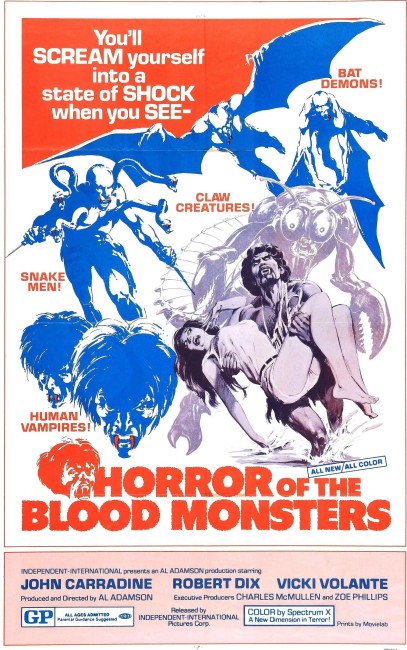 aka Vampire Men of the Lost Planet

The scientist Dr Rynning commands a space mission aboard the XB-13 that heads in search of the origin planet of the vampire scourge that has affected Earth for millennia. The mission goes inexplicably awry and they are forced to put down on a nearby earth-like planet. There they discover the peaceful Tagani cave people who are under constant attack by the brutish blood-drinking Tubeton. After altering the brainwaves of the Tagani woman Lian Malian so they can talk to her, they try to come up with a plan to convert the vein of crude oil in the Tagani caves in order to relaunch their rocket.

Al Adamson is one of the legendary Z-movie directors of the 1960s and 70s right up there alongside more well-known names like Edward D. Wood Jr and Herschell Gordon Lewis. Adamson made such films as Satan’s Sadists (1969), Blood of Dracula’s Castle (1969), the Filipino mad scientist/monster movie Brain of Blood (1971), the notorious Dracula vs. Frankenstein (1971), Blood of Ghastly Horror/The Fiend with the Electronic Brain/The Man with the Synthetic Brain/Psycho-a-Go-Go (1972), the softcore sf film Cinderella 2000 (1977), Death Dimension (1978), an action film with some sf elements, the possession film Nurse Sherri (1978), Death Dimension (1978), an action film with some sf elements, and the bizarre children’s film Carnival Magic (1981), as well as co-directed Dr Dracula (1980).

Adamson met a bizarre death in 1995 when Fred Fulford, a live-in contractor on his estate killed him, buried Adamson’s body by cementing it in under the tiles of the bathroom floor and fled, using Adamson’s credit cards before being apprehended by police. Blood and Flesh: The Reel Life and Ghastly Death of Al Adamson (2019) is a documentary about Adamson’s life and films.

With Horror of the Blood Monsters/Vampire Men of the Lost Planet, Al Adamson took his lead from what Roger Corman had done a few years earlier with films such as Battle Beyond the Sun (1963), Voyage to the Prehistoric Planet (1965), Queen of Blood (1966) and Voyage to the Planet of Prehistoric Women (1968) where he had obtained the rights to two Russian films and had reissued them as English-language films with a handful of new scenes, or else used the special effects scenes in entirely new films. In this case, Al Adamson obtained the rights to a Filipino film Tagani (1965) and added new footage he shot to it. Alas, the original seems to no longer be available for comparison and English-language information on it is non-existent.

Al Adamson’s films always gave the impression that they were cobbled together from half-finished attempts to make other films and some Hollywood has-been brought in for a day’s shooting to knit the plot together. To this extent, Horror of the Blood Monsters/Vampire Men of the Lost Planet starts off with scenes involving a bunch of vampires attacking people in the street (where the vampires all have ridiculously over-sized fangs).

The film then bewilderingly jumps into what look like a micro-budgeted attempt to conduct a space mission film. The mission is headed by scientist John Carradine, who spent some three plus decades eking out a living in some of the most miserably cheap genre films ever made. Carradine was clearly only briefly contracted and spends the bulk of the film inside one room of the spaceship spouting nonsensical mission control doubletalk.

Most of the Earth-based mission control scenes are filmed with a couple of wide angles of people at a control panel but mostly consists of Robert Dix and Vicki Volante speaking into a microphone where their scenes look as though they have been filmed in front of a curtain. The first half-hour of the film consists of these cuts back and forward between mission control and the spaceship where there is no drama other than the contrived tension of the crew encountering various stellar phenomena. There are some cut-rate shots of the rocket optically superimposed over starscapes and planetary scapes – some of which have been uplifted from The Wizard of Mars (1964) – and a laughably cheap model shot of it landing.

Of course, when the film lands on the planet, most of what we see is made up of cavemen scenes taken from Tagani, as well as a few dinosaur battles from One Million B.C. (1940), which is perhaps the most recycled film in the history of cinema. In order to disguise the fact that Tagani and One Million B.C. are in black-and-white and the footage he has shot is in colour, Adamson invents some amusing nonsense about the planet being part of ‘the chromatic spectrum’, allowing each shot to be tinted a different colour.

The bulk of the planetary scenes are taken up between battles between the peaceful Tagani and the brutish Tubeton (who have fangs – the nearest we get to any actual vampires). These contain some bizarrely entertaining scenes – like where the people are attacked by crab men (extras with pincer appliances on their hands) and a cave full of hairy winged bat creatures that are played by dwarves.

Adamson introduces Jennifer Bishop as a primitive woman and has the astronauts alter her brain so they can interact with her – “Use the communicator,” John Carradine commands from the ship, “It’s for animals,” he is told, “we can’t use it on her.” “It’s dangerous but you can use it. We’re merely rearranging her brainwaves magnetically. She’ll understand everything you say.” There are occasional cutbacks to scenes of mission controllers Robert Dix and Vicki Volante having a bedroom romp involving some kind of artificial Space Age sex a la Barbarella (1968), although this is PG-rated and she remains under the blanket. It should also be noted that despite the futuristic advances in sexuality, the man still manages to leave the woman unsatisfied with Robert Dix getting up and apologising “I know you need more time for satisfaction,” as he puts his clothes on.