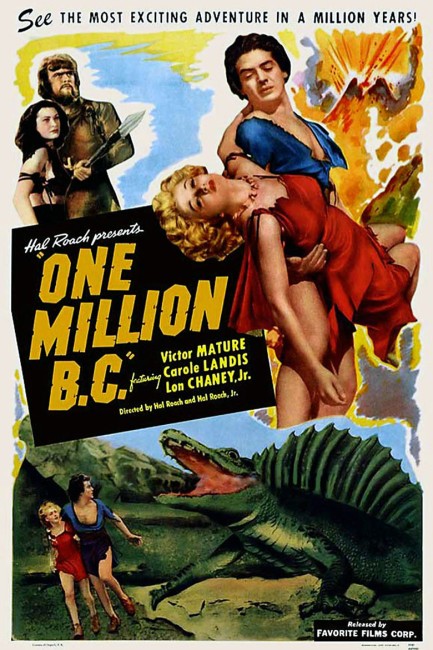 In the present day, a group of climbers take refuge in a cave. There they meet an anthropologist who is studying the prehistoric cave paintings. As they wait for the weather to clear, the anthropologist interprets what the paintings tell. They tell the story of how among the brutish Rock Tribe, Tumak fought with the leader Akhoba and was then pursued by a mammoth and fell over a cliff. Presumed dead by the tribe, he was instead swept down the river and found by Loana who welcomed him among her people, the more peaceful Shell Tribe. Braving wild animals, rampaging dinosaurs and volcanic eruption, Tumak learned their ways and sought love with Loana.

The genre of prehistoric cinema began in the silent era with the likes of The Cave Man (1912), D.W. Griffith’s Man’s Genesis (1912) and Willis O’Brien’s The Dinosaur and the Missing Link: A Prehistoric Tragedy (1915) variously depicting the lives of cavemen. Other films such as The Ghost of Slumber Mountain (1918), The Lost World (1925) and most famously King Kong (1933) depicted pockets of prehistoric survival in the modern era. One of the biggest successes of the genre was One Million B.C., which was even nominated for an Academy Award for its effects.

One Million B.C. was made by Hal Roach (1892-1992) who had become one of the top film producers of the silent era. Roach had enormous success with his comedy shorts during the 1910 and 20s, working with Harold Lloyd (in his early days) and most notably making the Laurel and Hardy and the Our Gang shorts. Into the sound era, Roach fell out of popularity due to a misguided business venture with Mussolini’s son prior to World War II. He recovered from this and had reasonable success towards the end of the 1930s producing classic films such as Topper (1937), Captain Fury (1939) and Of Mice and Men (1939).

Roach co-directed One Million B.C. with his son Hal Roach, Jr. who also build a reasonable career as a producer during this era and beyond. Apparently, Roach had originally hired D.W. Griffith, the director of The Birth of a Nation (1915) and the aforementioned prehistoric film Man’s Genesis, to produce but the two parted ways. Roach later claimed that Griffith had directed some scenes but this remains unverified (which would make One Million B.C. the last film that Griffith had any hands-on involvement with).

There is also claim made at the IMDB that One Million B.C. was the top grossing film of 1940 but a look at the actual box-office statistics at Ultimate Movie Rankings (https://www.ultimatemovierankings.com/1940-top-grossing-movies/) show this to be erroneous and the film only earned $0.8 million, making it the 180th on the box-office list of that year and this claim simply untrue.

Almost any of these prehistoric films look fairly dated today and this is no different – no more than a bunch of extras dressed in furs going “eek” and “ugh”. The Roachs are not particularly good at directing the human drama – there is rarely anything in the film that gets closer in on its characters than a medium angle. One of the greater amusements is how caveman good guy Victor Mature manages to remain clean-shaven and with short hair (having somehow managed to invent the razor) while all the other cavemen are more anthropologically accurately depicted with beards and long matted hair. The scenes with Carole Landis introducing Victor Mature to more civilised and cooperative as opposed to brutish behaviour feel as though they should have been played for comedy.

I was fairly much prepared to dismiss One Million B.C. based on these early human scenes but then it came to the animal and dinosaur scenes. I was riveted from the scene where we see a man fighting a woolly mammoth (an elephant in drag) and the scenes with Victor Mature being pursued up a tree by a mammoth and the tree knocked over a cliff. I had seen many of the dinosaur scenes used as stock footage in other films (see below) but this did not prepare me for the vividness of the ways they appear here. The Roachs have taken the shortcut of using optically enlarged lizards rather than the more time-consuming process of stop-motion animation used on The Lost World and King Kong. This is possibly the best use of optically enlarged lizards on screen and there is something raw and savage watching the two lizards grapple and wrestle one another around. There are some equally good dramatic scenes with the volcanic eruption where we see lizards being engulfed and people fleeing the lava and being drowned by it.

The film later underwent a colour remake with One Million Years B.C. (1966), the famous version starring Raquel Welch, which was co-produced by Hammer Films and this time had stop-motion animated dinosaurs courtesy of Ray Harryhausen.