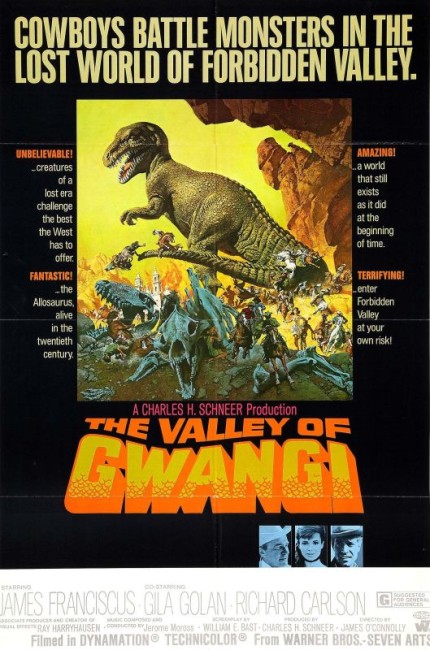 In a small Mexican town around the turn of the century, horse trader Tuck Kirby meets up with his old flame, T.J. Breckinridge, owner of a financially troubled circus. When he meets palaeontologist Professor Horace Bromley, Tuck conceives a plan to aid T.J.’s circus by displaying Bromley’s eohippus, a miniature prehistoric ancestor of the horse. The eohippus then leads them to the secret location of the Forbidden Valley that the locals speak of, which they find to be teeming with prehistoric life. There Tuck conceives an ambitious plan to lasso a tyrannosaurus rex and bring it back to display.

The story is fairly much King Kong (1933) relocated in the American West. There are a number of annoyingly familiar similarities to Kong – a journey into a land That Time Forgot, the capture of a mighty prehistoric beast, its display before the public back in civilisation and its subsequent rampage and destruction.

What makes the rehashed story worthwhile is Ray Harryhausen’s stunning animation work. Harryhausen deals up some extraordinary set-pieces – the comic scenes involving the cowboys’ attempts to rope the miniature eohippus; Curtis Arden’s fight with a pterodactyl; the amazing scenes involving the roping of Gwangi and the fight between Gwangi and the stegosaurus; and the fabulously exciting climax with Gwangi rampaging through the town, battling the circus’s elephant and finally being buried alive in the cathedral.

The verisimilitude of these sequences show Ray Harryhausen at the absolute peak of his art. Unlike many of his earlier films – Jason and the Argonauts being one example – Harryhausen has here learned the art of dramatically staging the animation sequences and the benefit is a real payoff.

The Valley of Gwangi is uncreditedly based on a script that Ray Harryhausen’s mentor and King Kong special effects man Willis O’Brien tried to float in the 1940s but failed to get off the ground – although a variation on the cowboys roping the dinosaur sequence survived in O’Brien’s Mighty Joe Young (1949) and O’Brien provided the story for The Beast of Hollow Mountain (1956), which also used the cowboys vs dinosaurs idea. Some of the animal scenes are amazingly sadistic – the bull goring sequence and the scenes of the horses being tripped up during the mock Wild West shootup sequence are alarmingly realistic. The cast is so-so. The sensual and very, very Italian Gila Golan does not in any way convince that she is an American.

Director James O’Connolly was producer of a series of British Edgar Wallace adaptations during the 1950s, as well as the British dream-programming film The Electronic Monster/Escapement (1960). He became a producer for Herman Cohen with Konga (1961). He had directed a handful of British crime films before signing up as director to make Berserk (1967) and the non-genre crime comedy Crooks and Coronets (1969) for Cohen. in genre material he also made the horror film Tower of Evil (1972).