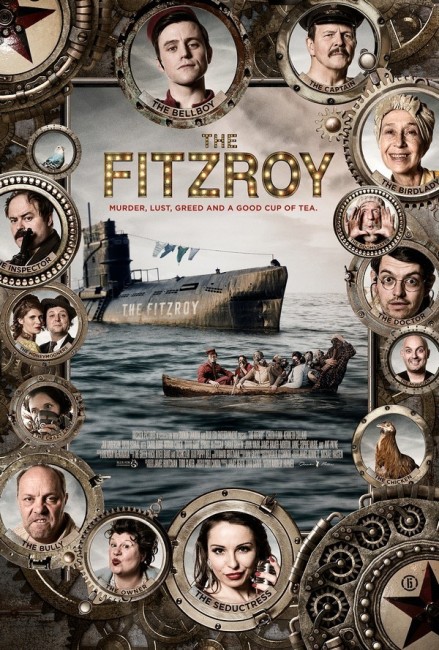 Much of the surface of the world is covered in poison gas. The Fitzroy is a disused submarine moored just offshore that has been converted into a hotel. On behalf of the bad-tempered captain Cecil, the bellboy Bernard tries to hold everything together, tend to the guests and prevent leaks. Out of the blue, a newlywed couple, Mr and Mrs Fisher, arrive – the first guests The Fitzroy has had. The room of a recently departed tenant is quickly cleared out. Asking about entertainment, Cecil quickly lies and says they have a talent show coming up. As the residents prepare for the show, Bernard is tempted by Cecil’s mistress Sonya for whom he has unrequited desire. She suggests he could take over the ship if the two of them first eliminated Cecil. At the same time, an inspector is sent by the government to determine if the decaying Fitzroy is up to shape.

The Fitzroy was a debut film for British director Andrew Hamer. Hamer filmed on an apparently minute budget. The only names the film boasts are C- list celebrities known from television such as David Schaal and David Gant. The film was not widely seen.

The Fitzroy ends up a scratch of the head. It clearly takes plays in some kind of alternate reality. The tagline at the IMDB calls it “an alternative post-apocalyptic 1950s”, which I suppose sums it up as best as anything. It could be an alternate history – the decor is sort of 1950s or at least the British seaside holiday resort kitsch of that era. On the other hand, the film does nothing to establish any kind of historical divergence point or What If scenario, an essential requirement for an alternate history. The surface world is covered in poison gas but with the retro decor it could not exactly be said to be a post-apocalyptic film. I am struggling to think of any of the theme categories at the bottom of the page into which I can slot the film.

The film that one is most reminded of – quite possibly one that Andrew Hamer even took inspiration from – is Jean-Pierre Jeunet and Marc Caro’s quirky cult film Delicatessen (1991), which is also equally unclassifiable. It similarly takes place in a building – an apartment in that film, a hotel in a converted submarine here – full of strange and eccentric tenants. Both films have the same sort of quirky oddball humour and concern an innocent dupe who works for the manager and is wound into murderous schemes. There is even a similar scene in either involving an onomatopoeic orchestra.

Unfortunately, while Delicatessen was a charming gem, The Fitzroy in a word is not. The material feels like it is there but the film falls into the strain of British humour that plays everything at a farcical level of pantomime. There is plentiful supply of murder plots, femme fatales, visiting inspectors, leaks threatening to sink the submarine and the like but it whips by at a colourful, frenzied pace without ever stopping to actually be funny.