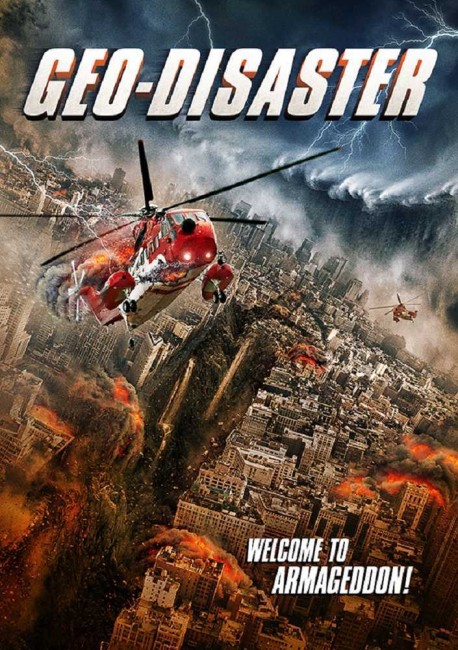 The radio telescope at Arecibo tracks a chunk of dark matter at it passes through the Earth. This leaves a hole in the ground as it emerges in Alaska. The collapsing crust around the hole creates massive earthquakes. In Los Angeles, Matt Mason has taken his teenage son Rick into the mountains on a weekend camping trip to bond over the fact that Rick is not happy that Matt has remarried his younger jiu-jitsu instructor Johanna. They are caught up as a quake pitches their tent down the mountainside. Meanwhile, back in the city, Johanna and Matt’s teenage daughters Kaley and Cassie try to make an escape as the quakes cause the apartment building to collapse around them.

Geo-Disaster comes from Thunder Levin (apparently his real name) who is better known as the screenwriter of Sharknado (2013). Levin first directed the low-budget Soulmates (1992) and went onto write-direct Mutant Vampire Zombies from the ‘Hood (2008) and The Asylum’s American Battleship (2012) and AE: Apocalypse Earth (2013). Levin has written scripts for several other Asylum films, including 200 M.P.H. (2011), Atlantic Rim (2013), Megalodon (2018), Zombie Tidal Wave (2019) and all of the Sharknado sequels.

Geo-Disaster was another of The Asylum’s mockbusters, in this case designed to come out at the same time as Dean Devlin’s Geostorm (2017). Alas for The Asylum, Geostorm proved a big box-office flop. The plot follows two story strands – one with Matthew Pohlkamp and son Erich Riegelmann in the mountains and the principal drama where they encounter a group of survivalists; and of Pohlkamp’s wife Natalie Pelletier and two daughters Maggie Rose Hudson and Isabella Bazler as they make an escape from the collapsing apartment building and out into the anarchy of the streets. Most of the drama is focused around these two storylines with occasional cuts away to the observatory at Arecibo.

There are some not too bad mass destruction effects, although these also sit alongside some cut-price ones – the collapse of the exterior of the apartment building. There are also some decidedly shabby ones – like where Matthew Pohlkamp and Erich Riegelmann go skidding down the mountainside in a tent, which cuts between shoddy digital shots of the tent hurtling down the slope and the interior where the two actors hardly even bump about. Everything is neatly wrapped up and the disaster ends just as quickly as it began.

The film comes with some bad science. One of these is the idea of dark matter striking the Earth. Dark matter is so-called because it is speculative – the mass of the universe is far more than that which is visible to us (some 85%) where the invisible part only appears to react with the rest of the universe in terms of gravity. Dark matter is theoretical because there is no direct scientific evidence of its existence at present; it is only a name given to an unknown. However, if it does exist then millions of dark matter particles would pass through the Earth every second, not reacting with ordinary matter and undetected by current scientific means. This makes the opening where an anomaly in space suddenly appears and scientists detect dark matter on a collision course an absurdity, as well as the subsequent scene where the dark matter impacts in Alaska and passes through the Earth leaving a big hole in the crust. Even if dark matter could do that, all that would happen in reality would be that the weight of the Earth would cause the hole created to collapse in on itself and seal back over.