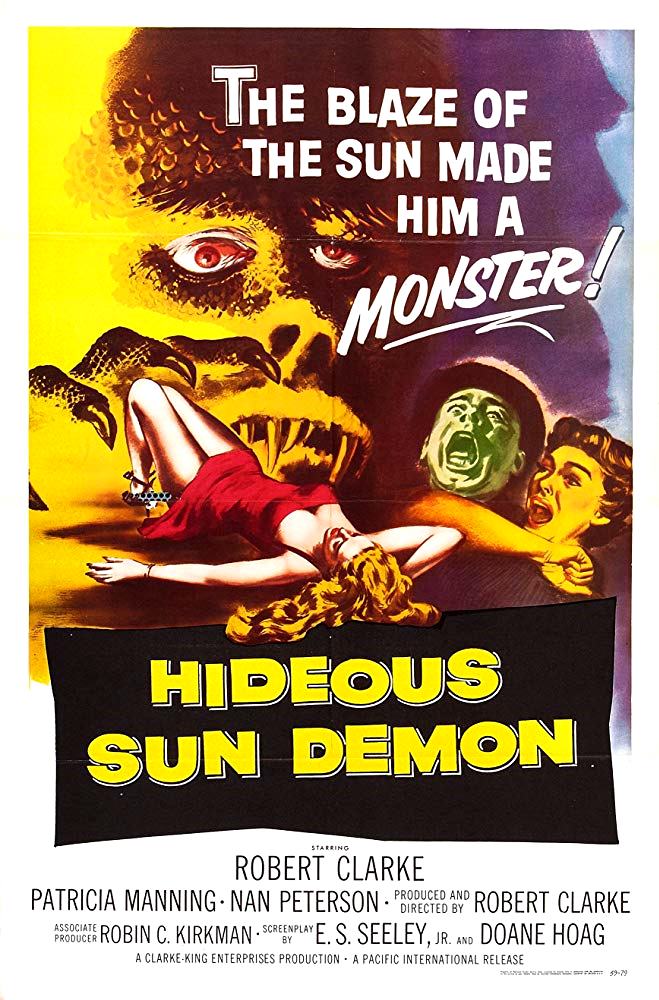 Gilbert McKenna, a scientist at an atomic research centre in Los Angeles, is rushed to hospital after exposure to radioactive isotopes. Doctors are puzzled as there seems nothing wrong with him. However, when McKenna is placed out in the sun to recuperate, this causes him to transform into a reptilian monster. The doctors realise that the radiation is making him devolve into a primitive lifeform and that the transformation is triggered by exposure to sunlight. McKenna retreats to his Santa Monica beachside home and stays out of the sun. In a desire for company, he wanders to a local bar. However, his dalliances with singer Trudy Osborne cause him to stay out after the sun comes up and transform back into the monster. In no time, the transformed McKenna becomes the focus of a police manhunt.

The Hideous Sun Demon is a classic B movie from the 1950s. It was a directorial outing for Robert Clarke who had gained a small presence as an actor in a number of B Westerns and other genre films of the era such as The Man from Planet X (1951), Captive Women (1952), The Astounding She-Monster (1958), The Incredible Petrified World (1960) and Beyond the Time Barrier (1960), as well as marrying one of the King Sisters. Clarke made The Hideous Sun Demon independently on a reported budget of $5000, shooting around his own home over the space of twelve weekends. It would be the only film that Clarke would ever direct.

The Hideous Sun Demon falls into a minor spate of films that were influenced by Hammer’s The Quatermass Xperiment/The Creeping Unknown (1955) and its story of an astronaut returned to Earth and mutating into a monster. Other films such as Night of the Blood Beast (1958) and First Man Into Space (1959) copied the basic plot. The Hideous Sun Demon drops the returned astronaut angle in favour of the more topical notion of an atomic scientist but essentially uses the same set-up. The IMDB claims that The Hideous Sun Demon was later remade as The Incredible Melting Man (1977), another variant on the Quatermass Xperiment plot, although this is quite simply untrue – The Incredible Melting Man does not credit this film as source (which is usually what one takes as denoting a remake) and the plots of the two are dissimilar. That said, The Hideous Sun Demon‘s basic ideas certainly fed into the general conception of The Incredible Melting Man but calling it a remake is about as much point as citing the other abovementioned films as source.

The Hideous Sun Demon is usually spoken of in dismissive terms but is a film that has some undeniable promise, even if never fully transcending the B-budget ghetto. The makeup on the transformed Clarke looks effective and for once does not belie the ‘hideous’ promise of the title. The script though seems to have little clue what evolution is. In its talk about Clarke’s body reverting to more primitive forms, what it is actually referring to is mutation – evolution refers to progressive adaptations over the span of multiple generations.

Robert Clarke shows some promise as a director. Rather than the pedestrian workmanship of most of the directors working in the B-budget arena during the era, he seems attuned to the actors. He occasionally gives the film a nice sense of internal mood – I liked a scene where Clarke stands on a cliffside deciding whether to jump before he is distracted by people on the beach below. The scene where Clarke picks up singer Nan Peterson and gets drunk with her on the beach, going to sleep there before realising he has stayed until morning and the sun comes up whereupon he starts to transform is a reasonable one that seems driven by allowing the actors to improvise – an idea that was almost unheard of in this era. I would certainly have been interested to see what else Robert Clarke might have made if given a half-decent budget.

You also cannot wonder whether much of the film held some autobiographical element on Robert Clarke’s part, whether the Hideous Sun Demon acts as a metaphor for his life as a hellraiser. When boiled down, it is essentially a Dr Jekyll and Mr Hyde story about a decent ordinary man struggling against a bestial monster that emerges to go rampaging. One of the more amusing aspects of the story is how Clarke’s scientist seems compulsively driven to go out to bars, get drunk and dally with Marilyn Monroe-lookalike Nan Peterson and how this constantly results in a series of complications that end with him transformed into the monster. I have no knowledge of Robert Clarke’s private life so can only speculate but it reads like a giant metaphor for alcoholism that hangs over the film.