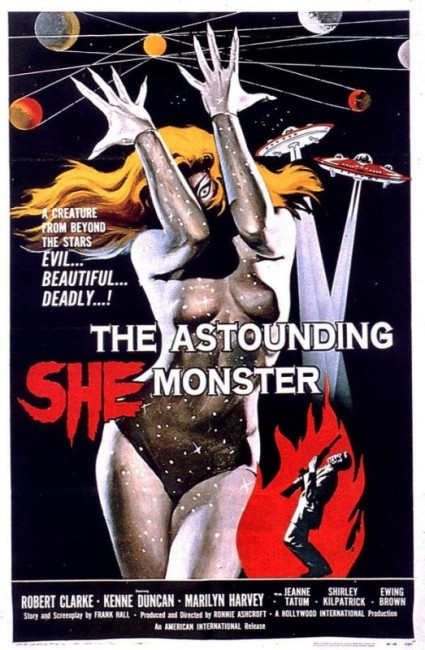 Two hoods abduct heiress Margaret Chaffey. However, their car breaks down in the San Gabriel Mountains and so they force their way into the cabin of geologist Dick Cutler. A mysterious alien woman then appears from a meteorite that has crashed in the hills. Her radium suit proves deadly to all that she touches. She is impervious to bullets and so Cutler and the others try to improvise a mean of stopping her.

It is a rather dreary film. It gives the appearance of having been shot at someone’s mountainside cabin in the space of about a single weekend. Ronnie Ashcroft’s direction is almost entirely static – the film is shot in long, wide angles, something that low-budget directors like because it requires less camera set-ups, something that on the other hand also proves dramatically stultifying. The plot consists of lots of running about between the cabin and the mountainside with the alien woman appearing and killing people every now and again. The dull happenings on-screen happenings are certainly enlivened a score that thunders away with a good deal of frenetically brassy melodrama.

There are occasional pluses that make The Astounding She-Monster almost worthwhile. One of these is wonderful purple voiceover narration at the start: “Too bad Maggie, the Cadillac has not failed you. Ride swiftly – you have a very special appointment this day. An appointment that may very well change your life – or end it … There’s the gate, Maggie – beyond it lies the most fantastic experience of your life … No use trying to struggle, Maggie – being kidnapped could be termed about normal for a socialite like you – and you are being kidnapped. In fact, you are all being taken to a rendezvous with fate. High in the San Gabriel Mountains the stage has already been set. No turning back.” With the arrival of Shirley Kilpatrick’s alien, the narration goes into overwrought hyperbole: “Our final character – a visitor from beyond imagination. Evil until evil.”

There is only a single scene where Ronnie Ashcroft’s direction rises to the occasion – where Robert Clarke and Marilyn Harvey are being held by alcoholic moll Jeanne Tatum and between them start sewing doubts in her mind and preying upon her need for a drink. One plus is also Shirley Kilpatrick’s intergalactic femme fatale. In weirdly alien makeup and with her appearances always accompanied by a peculiar optical wavering effect, Kilpatrick certainly cuts an effectively eerie presence.

On the other hand, it is also a film of underwhelming promise. The opening narration goes on, in typical The Day the Earth Stood Still (1951) manner, about cosmic retribution. “Are we today on the point of repeating this cosmic suicide? There is one planet in particular who fears that if the Earth is not destroyed first it will destroy the universe.” Alas, Shirley Kilpatrick’s single alien invader, killing people with her radioactive touch, proves a less then imposing delivery on such a promise. There is a modest twist ending, which Ashcroft fails to manipulate in any particularly imaginative way, wherein the alien woman is revealed to be an emissary of peace (something that contradicts the opening statement about cosmic retribution) and the survivors wonder if her people will return with another message or in search of vengeance.