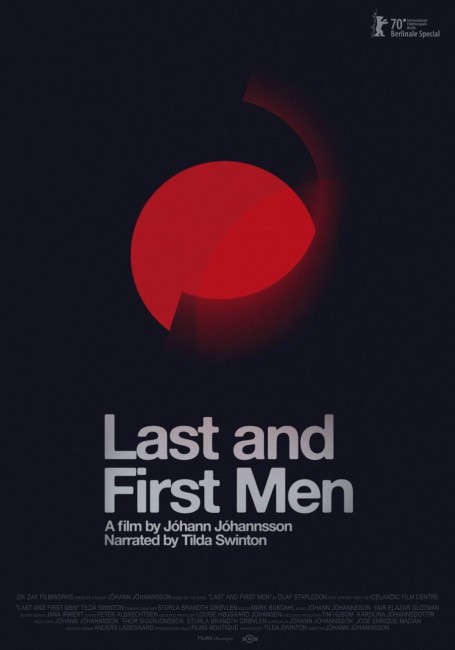 A message from the eighteenth species of humanity two thousand million years in the future. It tells how the Earth was long ago made uninhabitable as the sun expanded in size. The descendants of humanity relocated on Neptune. There they created a utopian society devoted to the life of the mind where even language became redundant. However, space explorers returned with news that a nearby star had gone supernova and would soon obliterate the Solar System. In their search for hope in the face of oncoming annihilation, the future descendants of humanity attempted to reach back into the past to offer a warning.

Olaf Stapledon (1886-1950) was a British philosophy lecturer. Stapledon was an ardent pacifist and conscientious objector during both World Wars and lectured around the world on various philosophical matters. However, it was as a science-fiction writer that he found his calling. His first book was Last and First Men: A Story of the Near and Far Future (1930). There and in the sequel Last Men in London (1932) and the subsequent Star Maker (1937), Stapledon awed readers with visions of human history and evolution on an epic scale spanning billions of years into the future. Stapledon wrote other science-fiction works such as Odd John (1935) about a supermind and Sirius (1944) about an intelligent dog, as well as several other books that are more essays on issues like the future of society and life after death.

Icelandic-born Jóhann Jóhansson is known as a composer. After work on various Icelandic films and tv, he had international success with the scores for Denis Villeneuve’s Prisoners (2013), Sicario (2016) and Arrival (2016) and other films including The Theory of Everything (2014) and Mandy (2018). He received Academy Award nominations for The Theory of Everything and Sicario. Jóhansson made his directorial debut with the 29-minute short film End of Summer (2014) and Last and First Men would have been his feature-film debut. Unfortunately, Jóhansson was found dead in his apartment in early 2018 by what the coroner listed as a fatal mix of cocaine and flu medications. Although Last and First Men is given a 2017 release date by the IMDB, this was an uncompleted film festival screening. The full version of the film was pieced together by his associates and premiered in 2020 at the Berlin International Film Festival.

If I had to create a list of what I consider unfilmable books, Last and First Men would have to be right at the top of the list. Certainly, the term unfilmable has been thrown at a number of works – Tristram Shandy (1795), Naked Lunch (1959), The Lord of the Rings (1954-5), Alan Moore’s Watchmen (1986) – but filmmakers have found ways to do so.

That said, making a film out of Last and First Men kind of contravenes everything that a filmmaker is taught in film school, It had no story in the customary sense that we follow a group of characters through their ups and down; rather it is a work that traces the evolution of humanity across thousands of millions of years. It has no individual characters – humanity itself is the character, if you like. Indeed, there are not even any humans on screen for the entire running time of the film – the nearest we get is Tilda Swinton’s narrating voice.

The nearest equivalents to this we have seen before might be films like 2001: A Space Odyssey (1968) or Cloud Atlas (2012) – at least in their epic cross-historical sweep. Even they didn’t go to as far as Last and First Men does and placed their focus on various characters and their dramas in between the pullback to the epic scope. Outside of genre material, you could maybe draw comparison to Derek Jarman’s final film Blue (1993), which consisted entirely of a blue screen accompanied by audio musings and some story.

Last and First Men is kind of take no prisoners in that regard. The whole film is simply a series of static shots – beautifully filmed in black-and-white – of a series of sculptures in the former Yugoslavia that were built as memorials to fallen soldiers in World War II. They are abstract shapes in concrete, caught halfway between seeming like brutalist architectural constructs and shrines left by some long-forgotten primitive culture. The camera is static as it slowly shifts between various angles on these monuments. There is no movement to the film – all you observe is the passing of clouds across the sky, the wind in the grass and the distant course of birds in flight. When the camera focuses on the weatherbeaten faces carved into the stone, there is the eerie sense that we are watching another species looking out across the vastness of space and time.

Despite its lack of anything happening on screen, Last and First Men remains a spellbinding film. The only thing that drives the drama is Tilda Swinton’s voiceover. (What we have is essentially an audiobook with pictures). Her voice gives Stapledon’s text a hypnotic power. She speaks with a gravitas and urgency that conjures the wonders of a far distant race that has transcended human form. And in the closing scenes, there is the bleak sense of despair as humanity faces its coming obliteration and the urgency of the appeal to present-day humanity.

Some of Olaf Stapledon has dated nowadays. Humanity would have a lot more problems living on Neptune other than it simply being an available planet to move to – it is a gas giant for one (although its moons might be a better choice). If there is a fault it is that it is never clear how the narrator is appealing to present-day humanity to change their ways so as to save the future. On the other hand, you have to applaud the fearlessness of a work that dispenses with the easy handholds of any other dramatic film at the same time as it takes the biggest grasp of storytelling scale of any film ever made.

(Nominee for Best Adapted Screenplay and Best Cinematography at this site’s Best of 2020 Awards).