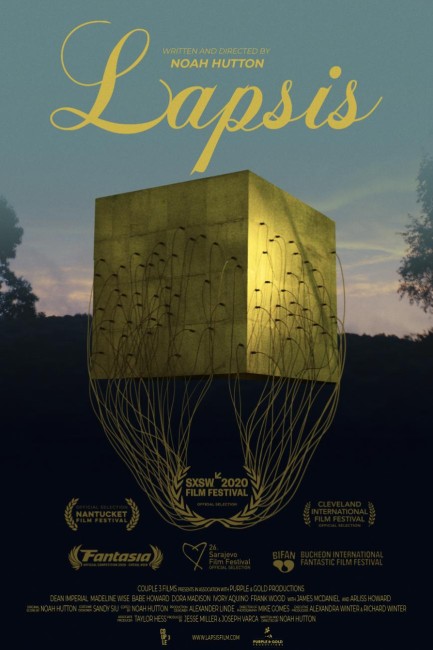 In Queens, Ray Tintelli is struggling to find treatment for his half-brother Jamie who is diagnosed with Omnia. Ray’s job as a delivery driver is not bringing in enough money and so Ray agrees to subcontract a job for Felix. This involves ‘cabling’ for the new computer network Quantum, which requires workers to crisscross designated areas dragging trolleys of cable. People can reportedly earn big money doing so. As he starts out dragging cable through the woods, Ray begins to learn the hidden rules of the job – how everything is automated, including monitored rest breaks, resupplies dropped by drones and how the cabler faces the possibility of losing a contract if they are outpaced by a robot. At the same time, Ray also learns that there is methods for cheating the system’s controls and fooling the robots, even an underground movement protesting for workers’ rights and bandits stealing cable. He also discovers that the identity bracelet he has been given with the login name Lapsis Beeftech belongs to someone else who is much hated among the others cablers for creating a system for detecting cheating.

Lapsis was a feature-length fiction debut for Noah Hutton. Hutton had previously made the documentaries Crude Independence (2009), King for Two Days (2012) and Deep Time (2015), as well as contributed to the multi-director Mosaic (2017). Noah is the son of actors Timothy Hutton and Debra Winger. Also present in the film is Hutton’s stepfather Arliss Howard (who married Winger after her divorce from Timothy Hutton) who plays the doctor, along with Howard and Winger’s son Babe, Noah’s stepbrother, who plays Dean Imperial’s sickly brother in the film.

Lapsis starts as a regular-seeming film. Dean Imperial is an average working joe – frustrated with bills and pointless regulations, struggling to get enough to get by and help his ailing brother (Babe Howard) – when he lucks upon a job that offers a potential jackpot, that of ‘cabling’ for new internet system. Quite what the job is actually meant to do is a mystery. It seems to involve people dragging rolls of cable across areas of the countryside on small carts, sometimes doubling up, but never actually doing what most cable companies do – burying the cables underground or running them through the air overhead (something you cannot help think would create a system that is very exposed).

The early sections of the film following Dean Imperial as he gets used to the job seem like a regular film. Indeed, I was questioning for quite some way into Lapsis whether this was a work that I needed to write up or not – at most, we seem to have a slightly Near Future technology and some robots, all of which seem within the realm of plausible fiction.

Things become increasingly stranger as we discover more about the strange subculture within the job that seems to operate on a series of baffling rules that are alien to Dean Imperial – that he is being monitored from his phone and can only take authorised breaks; cable resupplies being dropped from the sky by drone; an alternate credit system within the company; finding that he has been given someone’s else’s id bracelet and that his friend may be operating some type of scam and/or not being truthful to him; that the user name is actually a company agent, much hated for having created tough security protocols; that he could lose all his credits if he is outpaced by a robot and then that people are employing tricks to trap the robots; of an entire revolutionary underground protesting against the corporation’s exploitation, even of bandits living rogue in the forest trying to steal the cable.

If anything, Lapsis suggests a Kafka-esque work that has been updated for the 2010s/20s gig economy and the prevalence of corporations like Amazon and Uber and the way they have altered workplace behaviours. It is a Kafka-esque film about a man not just in job where he doesn’t understand the rules but equally where Dean Imperial seems a tiny cog surrounded by processes that designed to befuddle him – getting parking tickets because he hasn’t had the right computer to read the regulations; tied up in the medical insurance industry and forced to pay for treatments that may not even work; his credit held up because of an investigation from a department that doesn’t even appear to exist.

Noah Hutton does a promising job winding the scenario up, before eventually arriving at a disquiet ending. It certainly leaves me intrigued to see what he will make next. The cast are all solid in their roles.