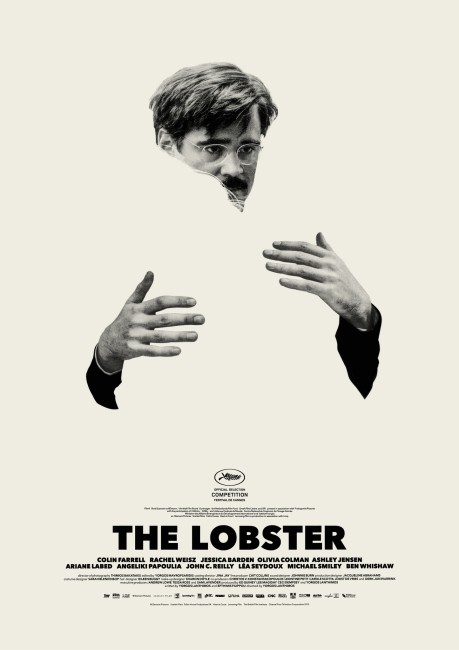 The architect David splits with his wife. In society, it is against the law to be single and so he is forced to sign into a hotel, taking with him his brother, who has been transformed into a dog. There he, and all the other guests, are given 45 days in which to find their match amongst each other or they will be turned into animals. The animal David chooses in this eventuality is a lobster. While there, they make sport by hunting and capturing the Loners who live in the nearby forest using tranquiliser guns. Everyone makes every effort to find a match, although desperation starts to set in for those whose time draws to an end. David eventually decides to fake a lack of pity so that he can make his match with a heartless woman and they are paired up. However, she reveals his ruse when she kills his brother and he breaks down in grief. David throws her in the transformation room and flees into the forest to join the Loners. Among the Loner society, he is required to lead a solitary life and avoid any romantic contact with others upon threat of punishment. This is thrown awry when David befriends a Loner woman and the two become attracted to one another and begin a relationship in secrecy.

The Lobster was the fifth film from Greek director Yorgos Lanthimos. Lanthimos had a breakout success with his second film Dogtooth (2009), a bizarre deadpan comedy concerning parents that have kept their children imprisoned in the grounds of a villa their whole lives, they only imagining the outside world with hilarious results. He failed to hit the same stride with Attenberg (2010), which has not been widely seen internationally, and Alps (2011), which was but seemed far more muted and less cohesive in the blackness of its ideas. The Lobster was Yorgos Lanthimos’s first English-language film. It won the Jury Prize at the 2015 Cannes Festival.

Throughout Dogtooth and Alps runs a fascination with nonsense societies and invented social rituals. This is no less the case than in The Lobster where Yorgos Lanthimos invents a future where people are engaged in bizarre mating rituals and dominated by bafflingly alien rules – you are constantly wondering what on earth is going on as we see things like Colin Farrell having to sleep and change with one hand tied behind his back or the maid coming in and giving him a lap dance of sorts. This, it eventually becomes apparent, is Yorgos Lanthimos’s satirical version of the modern Tinder, OK Cupid and speed dating-based society – where one’s match compatibility is stripped down to a few similarities such as nosebleeds or short-sightedness (all of the characters except Colin Farrell are known only by their attributes).

The Lobster took longer to strike me with its deadpan blackness than Dogtooth did, although is a far more polished and conceptually coherent film than Alps ended up being. The actors all deliver their parts in a deliberate monotone that has been desaturated of any emotional colouring. Lanthimos delivers the blackest of black comedy in pitch-perfect deadpan to hysterical effect – Angeliki Papoulia’s pretend attempts to choke on an olive in a jacuzzi; the attraction between Colin Farrell and Rachel Weisz and their secret coded language of body signals and unrestrained outburst of passion in front of Lea Seydoux’s parents; Farrell’s irritation at a suicide having interrupted his nap; and the considerable shock scene where Angeliki Papoulia blankly announces that she has kicked the dog to death. John C. Reilly is discovered having been masturbating over a picture of a naked woman on a horse and is admonished: “If I were you, I’d be crying over the horse not the woman. The horse was probably just another man like you.”

This is kind of take-no-prisoners black humour. The Lobster is not the film that gets easy multiplex play – it comes without any easy handholds for us to know what is going on, or even cues as to whether one should be laughing out loud at any given moment. Most of the audiences I was watching the film with left giving a collective “huh” of puzzlement. It takes a certain hardied dedication to non-multiplex fare to get it; even then, I left not even sure whether I liked the film or not. All of that said, by the time it came to writing it up a couple of days later, the blackly deadpan wit had sunken in with a bite that was much funnier in the remembering.

Yorgos Lanthimos next reteamed with Colin Farrell for The Killing of a Sacred Deer (2017), a horror film in which Farrell must face the choice to kill one of his family to lift a curse and the Academy Award-nominated historical drama The Favourite (2018), which saw him nominated as Best Director.