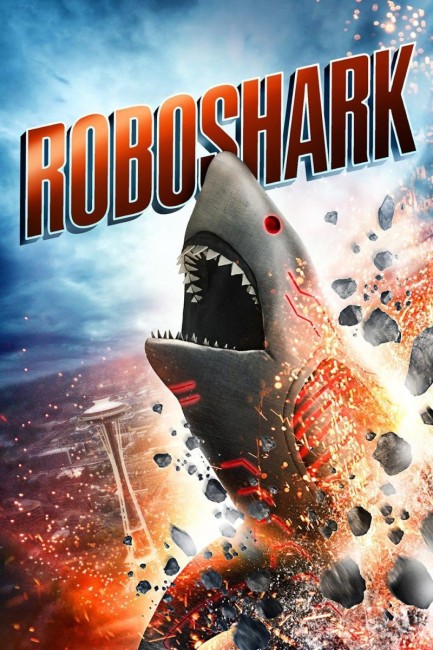 An alien probe comes down in the ocean where it is devoured by a shark, only to transform the shark into a mechanical hybrid. The Roboshark destroys a submarine. A video of it attacking a seaplane in Seattle Harbour is then posted on social media. Local weather reporter Trish Larson defies orders and takes her camera crew to go and obtain coverage of the Roboshark and is witness as it invaders a Starbucks. She fights with a colleague to get the story as her husband Rick, a supervisor at the public works department, is tracking the Roboshark’s progress through the sewers and keeps her abreast of its progress. The military come in, determined to destroy the Roboshark, unconcerned about the lives of bystanders. Trish is joined by her teenage daughter Melody who is able to communicate with the Roboshark and gets it to follow her on Twitter where she realises that it is not a threat.

Roboshark settles in as a Sharknado wannabe. The Gonzo Killer Shark film is a potentially highly entertaining fad for a low-budget filmmaker to jump aboard as it seems that no matter how cheesy and ridiculous the film is, it actually adds to the appeal. Indeed, filmmakers seem to be in a competition with each other as to how absurdly over-the-top they are capable of making each film and/or the mash-up the title brings together.

From the outset, Roboshark looks set to try and top the cheesiness value. The film is made with the cut-price locations and effects common to BUFO’s other disaster and monster movies (see below). In particular, the CGI animation of the Roboshark is painfully obvious and cheap. If you can say nothing else about the Sharknado films, they at least operate in a far more accomplished stratosphere of effects than this does.

However, the sense that Roboshark is going to be a cheap imitator soon dissipates. The film keeps serving up a range of entertainingly preposterous scenes – the shark invading a Starbucks; cruising through a shopping mall; it turning up in an indoor high-school swimming pool. The film makes much of its Seattle location and there is even a Bill Gates lookalike (Steve Sires) who sets out with the intention of reverse engineering the shark only to get chomped.

By far the most entertaining parts of the film are where the Roboshark goes on the internet, which is quite possibly either a dig at or an attempt to capitalise on the fact that the Sharknado phenomenon was spawned by Twitter. Daughter Vanessa Grasse makes the astonished realisation: “Roboshark is Following me on Twitter.” Matt Rippy makes a comment about Likes to which her response is “I don’t know if Roboshark has Facebook.” There is also the sidesplitting line where the Roboshark’s communiques are decrypted and turn out to be saying “Roboshark Phone Home.” By the end, the film even gets itself together and delivers some reasonably accomplished effects as the military decide to crash the Space Needle down to kill Roboshark.