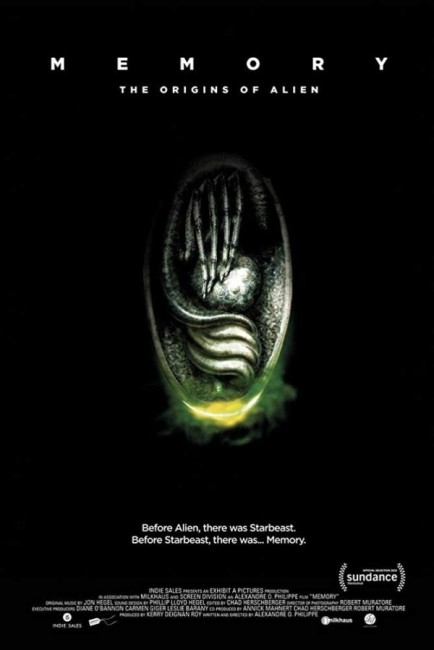 Alexandre O. Philippe is a director who mostly specialises in documentaries about films and fandom. He has previously made Earthlings: Ugly Bags of Mostly Water (2004) about Star Trek fandom; The People vs George Lucas (2011) about Star Wars fandom; The Life and Times of Paul the Psychic Octopus (2012) about the octopus that has made accurate predictions about the outcome of the World Cup; Doc of the Dead (2014) about the zombie film phenomenon; 78/52 (2017) about the making of Psycho (1960); and Leap of Faith: William Friedkin on The Exorcist (2019).

Memory: The Origins of Alien – although the title on the credits is simply Memory – is a documentary about the making of Alien (1979). Most of the first half focuses on the origins of the idea for the film and how the production came together, while most of the second half is focused on analysing and deconstructing the chestburster scene. The focus is only on Alien and spends no time on any of the sequels – indeed, the only mention made of any of the sequels is when brief clips from Prometheus (2012) and Alien Covenant (2017) are used in discussing Ridley Scott’s oeuvre.

The early sections detail the influences on Alien. We get some motion graphics made of panels from the comic-strip Seeds of Jupiter (1951) that lays down many of the aspects of the story. All the usual suspects are wheeled out when it comes to mention of filmic influences – The Thing from Another World (1951), It! The Terror from Beyond Space (1958), Planet of the Vampires (1965) and Queen of Blood (1966), although surprisingly no mention of the Doctor Who episode The Ark in Space (1974). There’s reference to H.P. Lovecraft and the possible influence of At the Mountains of Madness (1936) and an interesting argument made at one point that both Alien and John Carpenter’s The Thing (1982) were attempts to introduce Lovecraftian ideas into a commercial Hollywood environment.

Philippe spends the early parts of the film focused on Alien screenwriter Dan O’Bannon. I had read much about O’Bannon but was not aware about his childhood – growing up in rural Missouri in a home without a phone or a tv, which seems exactly the opposite of what you would expect of someone who became a major genre contributor. The film traces most of the familiar steps of the O’Bannon’s story – the difficult collaboration with John Carpenter on Dark Star (1974); his being hired to work on Alejandro Jodorowsky’s Dune project – for which see the documentary Jodorowsky’s Dune (2013) – and meeting with H.R. Giger before the production fell apart; his return to L.A. penniless and coming up with Alien as a way to make money – an interviewed Roger Corman even tells how he advised O’Bannon to ship the script around other studios; his eventual sale of the script to Brandywine Productions where it was initially taken up as a project by director Walter Hill before he departed and Ridley Scott came on board.

Philippe teases out little known details of the story – about the earlier screenplay Memory that O’Bannon could not complete; that Ronald Shusett came up with the idea of the facehugger; that H.R. Giger was brought onto the project at O’Bannon’s insistence and that O’Bannon even paid for his artwork when Brandywine refused, that Giger was fired before Ridley Scott became a convert and insisted that Giger be brought back in. One of the most interesting speculations made is about how O’Bannon suffered from an acute case of Crohn’s Disease (which eventually led to his death in 2009) and the connection made between this and an alien organism that gestates inside the stomach.

Less time is spent on Giger and Ridley Scott (Memory is executive produced by both O’Bannon and Giger’s widows) – we do get some archival clips of Giger, although Philippe appears to have been unable to obtain any interview time with the still-living Ridley Scott. The key point made is that Alien was a fortuitous convergence of the talents of O’Bannon, Scott and Giger, each of whom came together to make it the classic it is.

Much of the latter half of the film is spent analysing the chestburster scene and its importance, meaning and underlying symbolism. It is here that Memory gets at its most speculative. The chestburster discussion vies between those who were on the set – actors Veronica Cartwright and Tom Skerritt, art director Roger Christian – and assorted academics and film theorists who try to place the scene and film in a mythological and sexual political context. These latter end up being the most sketchy and off-topic. When a Francis Bacon painting is mentioned as inspiration for the embryo alien, the film diverts off to discuss Bacon and his homosexuality.

Others associate the alien in terms of Greek myth – the film even opens with Philippe having travelled to Delphi in Greece to stage a depiction of the arising of The Furies from Clytemnestra. That the alien comes with Freudian and sexual symbolism is undeniable but some of discussion starts to get a little pretentious with talk of ‘the repressed feminine’, ‘male guilt’ and the trauma of male rape, even analogies that frame the alien in the social context of contemporaneous serial killers Ted Bundy and John Wayne Gacy.