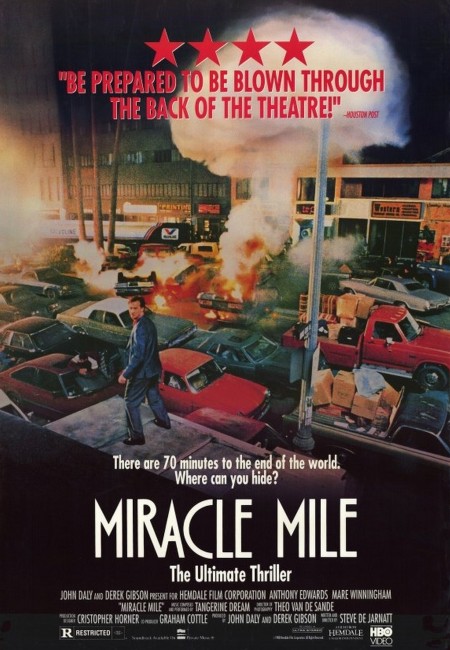 Harry Washello is a jazz trombonist who works a day job as a guide at the La Brea Museum in Los Angeles. There he meets waitress Julie Peters and the two immediately click. Harry agrees to meet Julie at a diner at midnight when she gets off work but a power-failure in his apartment means that his alarm fails to go off. He rushes to the diner three hours late but she has gone home. Outside he picks up a ringing payphone but finds that it is a wrong number dialled by a worker at a nuclear missile silo who is trying to call his father. The worker starts babbling about how the US has launched a nuclear strike and the Russian return strike will hits L.A. in 50 minutes, only for the caller to then be shot. Uncertain whether this is a prank or not, Harry discusses the call with the others in the diner. They immediately make plans to fly to safety by helicopter. However, as Harry tries to get to Julie and bring her with him, rumour about the impending nuclear attack spreads across the entire city causing mass panic.

Miracle Mile was the second directorial outing for Steve De Jarnatt – and the last film he made that had a theatrical release. De Jarnatt’s first film had been the offbeat and quirkily appealing science-fiction film Cherry 2000 (1987). Despite the promise showed in both films, De Jarnatt largely vanished after Miracle Mile, turning up as a director in television, as a producer on shows like American Gothic (1995-6) and Kindred: The Embraced (1996) and scripter of the odd episodes of shows like The X Files (1993-2002) and Aeon Flux (1995) plus the film Futuresport (1998).

Miracle Mile was a pet project that De Jarnatt struggled to get produced for some years, fighting off studios who sought to buy the script then wanted to rewrite the ending or give it to a more experienced director. The film gained a great deal of critical acclaim – and has even seemed in danger of being considered a cult film in later years – but was not a financial success. One wishes that De Jarnatt had had other opportunities to make as films as the two directorial outings he has as his legacy show a quirky individuality that stand out well above their contemporaries.

There’s an eccentricity to Miracle Mile that suggests a The Day After (1983) fused with something like Martin Scorsese’s After Hours (1985). De Jarnatt uses the central situation to strip away veneers, to show the extremes of people’s behaviour when faced with The End. There are some very good scenes – the moral dilemma Anthony Edwards faces when Mykel T. Williamson begs Edwards to shoot him, saying he has nothing left to live for and The End is only a few minutes away, but Edwards finds himself unable to take that one step closer to nihilism. Or the moment that Edwards emerges from the department store and the camera sweeps up overhead to reveal the citywide panic, showing the streets filled with looting, rioting and fights. Or where Edwards jumps onto the roof of the car to find a vast traffic jam stretching as far as the eye can see – and realises that all this has resulted from the phone call, which still may be a hoax.

The whole film seems like an illustration in chaos theory and butterfly effects – how things snowball into massive disasters that have initially unforeseen consequences – like how the cigarette butt that Anthony Edwards throws out the window is picked up and smoked by a bird, only to create an electrical fire that shorts out his alarm and causes him to be late to meeting Mare Winningham at the diner. Or how the argument between Edwards and Mykel T. Williamson at a gas station ends up in a shootout that accidentally blows up the entire gas station.

Some moments have a blackness of humour – like the two bimbos who arrive at the heliport with a box of condoms arguing about whether they are going to need them or whether they should be repopulating the species, or the people sitting in the back of the van debating about which celebrities to bring along with them. On the other hand, the humour is edgy, unsure where it sits at times, and De Jarnatt allows some scenes to become strangely overinflated. Nevertheless, the eccentric climax he works towards [PLOT SPOILERS], wherein Anthony Edwards and Mare Winningham settle in to drown in the crashed helicopter, realising they will end up as the dinosaur skeletons they joked about when they met at the La Brea museum, eternally embraced in one another’s arms, becomes peculiarly touching.