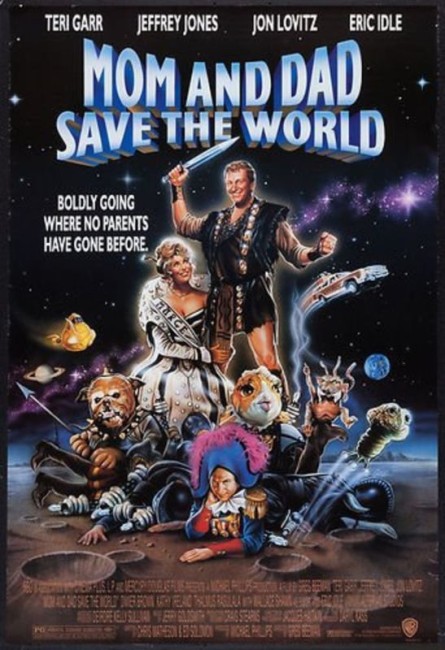 Spengo is a small planet inhabited by very stupid people. The planet’s emperor Tod Spengo decides to destroy the Earth. Tod targets his death ray laser on Woodland Hills, California but then becomes captivated by housewife Marge Nelson and decides he has to have her. Marge and her husband Dick are heading away on holiday when Tod whisks their car up through space to Spengo using a magno ray. Tod invites them to his ‘wedding’ and then places them in separate rooms – however, Dick’s room happens to be a cell, while Marge is outfitted as the bride for the wedding. Dick makes an escape and tries to avoid Tod’s attempts to kill him and return to rescue Marge before the wedding goes ahead.

Comedies about stupidity or featuring very stupid characters have an invariable tendency to come out with the same mind-croggling inanity that their characters do – good examples would be the Police Academy films, Dumb and Dumber (1994) and anything starring Pauly Shore, while within the genre you could cite efforts such as Morons from Outer Space (1985), Spaceballs (1987) and Spaced Invaders (1990).

There is rarely anything in Mom and Dad Save the World that approaches the remotely funny. Instead, the film seems to consist of a much in the way of frenetic running around and inane pratfoolery. The sole moment of amusing inspiration that the film produces is one gag where Jeffrey Jones succeeds in eliminating an entire army one by one using a grenade labelled ‘Pick Me Up’ that obliterates the holder after they do precisely that. Otherwise there is little to distinguish Mom and Dad Save the World.

What is sad about this is that a good deal appears to have been lavished on the film in terms of production values. There are some nice effects, particularly shots of the Nelson’s car passing the rings of Saturn; some delightful creature effects with the palace’s dog and fish headed guards; and some imaginative cartoonish rococo sets. Unfortunately, after opening, Mom and Dad Save the World flopped badly, earning only $2 million in domestic US rentals, despite having a $14 million budget.

Intriguingly, the plot for the film seems to have been modelled on Flash Gordon (1936) – or perhaps more so the remake Flash Gordon (1980). The script follows the same basic plot structure, involving a human couple abducted by the megalomaniac emperor of another planet who wants to destroy the Earth and then decides that he must marry the heroine and how the hero must venture through the planet’s wilderness encountering its various denizens in order to save her. Mom and Dad Save the World could have been construed as a parody of Flash Gordon 1980, if not for the fact that Flash Gordon 1980 itself was intended as a send-up of Flash Gordon 1936.