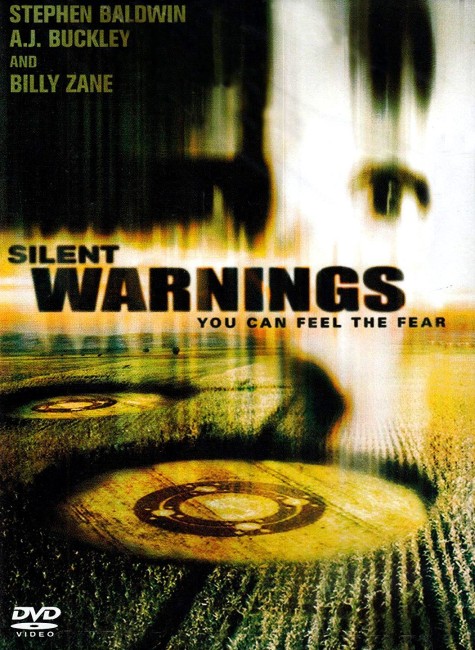 Following the mysterious disappearance of his Uncle Joe, Layne Vossimer travels to Porterville, Oregon, along with five friends from university, to make arrangements to sell up Joe’s farm. Arriving, Layne discovers that his uncle has become obsessed with UFOs and aliens and that the whole house has been electrically wired with alarm sensors. While there, they see crop circles mysteriously appearing in the cornfields. Members of the group start disappearing and they realise that the crop circles are teleport pads for the arrival of aliens.

Warnings/Silent Warnings was one of the numerous genre films produced by Philip Roth who is known as director of a series of sf/action hybrids such as Apex (1994), Digital Man (1995), Darkdrive (1996), Total Reality (1997) and New Alcatraz/Boa (2002), among others. Appropriately, given Warnings‘ topical matter, Roth’s production company is known as Unified Film Organization (UFO) and has made a great many other low-budget genre films. (See below for United Film Organization’s other films).

Warnings is a blatant copy of M. Night Shyamalan’s Signs (2002) and appeared on the Sci-Fi Channel nine months after Signs did. Both films feature people on a farm trying to make sense of the appearance of a series of crop circles and then discovering that they presage an alien invasion. In both cases, the invading aliens are mysterious grey humanoids that are little seen throughout. Even the titles of both films – Signs, Warnings – have been designed to appear the same.

The main problem with Warnings is that it is a film with an idea – aliens appearing out of the crop circles in the cornfields – but one where nothing much happens. It is some 50 minutes of running time before anything happens – during this time, all that we get is the appearance of a single mysterious crop circle. One or two creepy happenings in the lead-up would have helped atmosphere to no end. This tends to leave the bulk of the film’s first half slow-moving and dependent on the not-very-interesting dramas between the twentysomething cast.

Even when things do start to occur, it is not clear what is happening. The building atmosphere tends, if anything, to make Warnings seem like a cornfield horror film such as Children of the Corn (1984) and sequels or Slash (2002) but with science-fictional overtones. Eventually we get some cheap-looking CGI aliens. The film mounts to a passable climax with the aliens invading the farmhouse. However, it never makes much sense why the aliens are invading this particular cornfield and house. Or why they are vulnerable to iron, one of the most common elements in the universe. (Signs had very similar credibility problems with its even more absurd vulnerability to water). The film goes out on a downbeat twist with little explained and not a whole lot having happened either.

The cast are chosen as a line-up of good-looking faces. Most of them perform with a competent professionalism, in particular A.J. Buckley who gives the lead some convincing strength. Aside from the cast of pretty teen faces, the only recognisable names are those of Billy Zane who plays the sheriff, most of the time in a pair of sunglasses and a law enforcement baseball cap turned around backwards, and gets to go over-the-top during the climactic action scenes. The other is Stephen Baldwin who has a highly amusing scene at the opening playing a bugged-out, drunken hick being driven paranoid by the alien forces.

Christian McIntire was a visual effects supervisor on a number of low-budget films, including a number for United Film Organization. He also acted as a producer on several of Philip Roth’s directorial outings. McIntire has directed several other genre films with the Bermuda Triangle film Lost Voyage (2001), the miniaturised adventure Antibody (2002) and paranormal investigators film Phantom Force (2004).