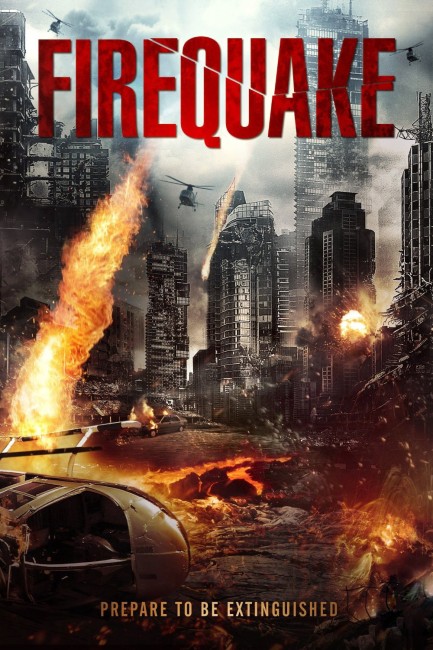 Teenager Nikki Carter arrives in the Czech Republic to join her estranged mother Dr Eve Carter. Eve is a celebrated engineer who has set up The Helios Project, which promises to tap a plentiful supply of clean energy from beneath the Earth. She is under pressure from Declan, who represents the backers, to get the project online but is insistent they need more tests. While she is away with Nikki, Declan orders the crew to take the project live. Things immediately go wrong and a vast explosion of helios energy floods the mines, causing firequakes to erupt all across the countryside. Declan orders the plant abandoned, leaving four technicians trapped below ground. As Eve and Nikki flee the devastation, they also must deal with Declan who has gone on tv to blame Eve for the disaster and now comes hunting them, determined to silence her.

Firequake quickly settles into the usual formula of the Syfy Channel and (B)UFO disaster movie – a weather control/geo-engineering experiment gone wrong with catastrophic results; the businessman whose greed and mad recklessness endangers everything; the last chance solution advocated by the hero(ine) and the doubts it will succeed; the estranged parent and child who reconcile throughout the conflict. The film does nothing particularly interesting or offers any distinctive variation on any of these.

There are all the usual cheap CGI effects – although it should be noted that Firequake is very sparse with the provision of these. There are none of the standard cutaways to a set-piece where some supporting character is introduced and killed in a freak accident, nor of landmarks toppling. In fact, most of the drama here is far more economically concentrated on the villain (Nigel Barber) pursuing Alexandra Paul through the devastation trying to kill her. The only other aspect is a B plot with four technicians from the plant who have been abandoned below ground trying to find their way out – even then the most interesting thing that ever happens to them is their having to jump over a pit above a river of lava that is all of about six feet across. When it comes down to it, the idea of fire quakes erupting all over the Czech countryside is just not that interesting a threat.