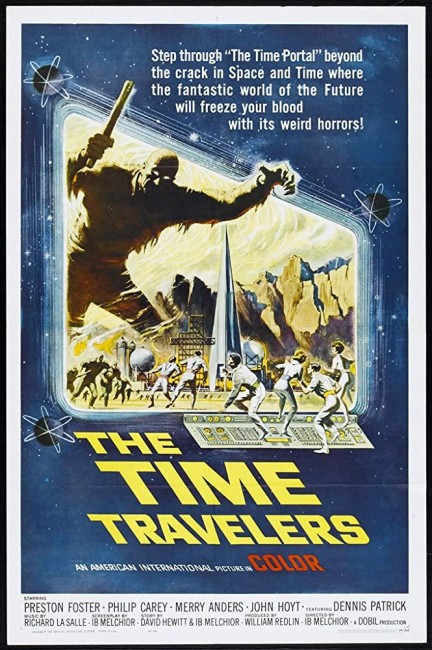 A group of scientists succeed in opening up a portal in their laboratory that allows them to walk through to the year 2071. While they are exploring the desert wasteland there, the portal collapses and they are trapped in the future. They are pursued by mutants but granted refuge by the handful of surviving humans who hide in an underground cave complex. The humans show them the marvels of their advanced technology and the plans to build a rocket to relocate on Alpha Centauri IV. These plans are endangered by the encroaches of the mutants. A vote by the council determines that there is not enough supplies on the ship to take the time travelers as well and they must be left behind.

The Time Travelers comes from Ib Melchior (1917-2015), a director and screenwriter who, usually in association with Sidney Pink, had directed The Angry Red Planet (1959) and written other films such as Reptilicus (1961), Journey to the Seventh Planet (1962), Robinson Crusoe on Mars (1964), Planet of the Vampires (1965) and Death Race 2000 (1975). Ib Melchior’s films sit between the terrible – Reptilicus – the routine – The Angry Red Planet – and those that suggested they could have been more if they had a better budget – Journey to the Seventh Planet, Robinson Crusoe. The Time Travelers was perhaps the best of Ib Melchior’s films.

Melchior creates an intriguing opening where the scientists succeed in opening up a portal by accident. It is a scene where Melchior suggests a great deal of intriguing possibility with minimal effect – the camera merely sits in the laboratory looking out through the portal at the bare desert terrain – cheaply but effectively represented by a projection on a wall, which the scientists never directly walk into – letting it loom with all manner of mystery as to what might lie there.

Thereafter though, The Time Travelers falls into the pervading trend of time travel movies of the era – the likes of Captive Women (1952), World Without End (1955), Beyond the Time Barrier (1960), even The Time Machine (1960) – where the time machine has no more imaginative possibilities than simply serving as in effect a rocketship to deliver the travelers into an exotic realm. Invariably in all of these, the time machine deposits the travelers into a post-holocaust future where they become engaged in a fight to defend the remnants of humanity against mutants.

Once in the future, Melchior falls into the pitfalls of many ventures to alien worlds or the future – the film grinds to a dramatic halt and instead becomes a catalogue of marvellous novelty gadgets – colour synthesizers, a planetary monitoring system, accelerated growth hydroponics, explanation of photon drives, a vibra-transporter. There is an extended trip to a robot factory where we watch the construction of robots. Here The Time Travelers descends to lowbrow comedy relief – “I thought you were making eyes at me,” the character of Danny says as the cute girl hands him android eyeballs. Famous Monsters of Filmland (1958-82) editor Forrest J. Ackerman turns up in a cameo as a technician with a single line about “Just getting things squared away.”

However, in the last quarter, Ib Melchior brings The Time Travelers to a remarkable ending where the time travelers return through the portal only to find the world moving 100 times slower than they are and watch themselves starting the entire process off again, then traveling through the portal a second time and becoming caught up in an endless loop. It is a wonderfully imaginative touch. There is something about this that is pure science-fiction, a tiny gem of what the genre is all about when it is at its best, and something delightful to find in a B-movie like this.