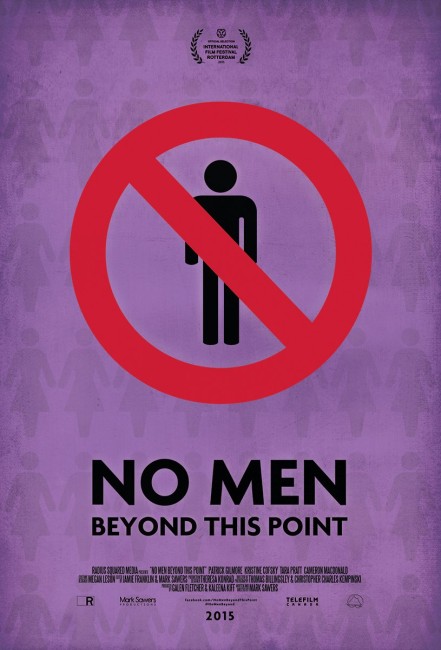 Ever since the 1950s, there have been a growing number of virgin births. At first, this was denied by governments but has grown at such a rate that it could no longer be ignored. Moreover, these were all becoming female births. As women came to take over society, men were increasingly regarded as irrelevant. War decreased and eventually men were banished to reservations and fed doses of oestrogen to make them more docile in the hope that they would eventually just die out. A train of thinking has emerged that regards sex as something that women will evolutionarily grown out of. Andrew Myers is the youngest man alive in the world at age 37 and works as a domestic servant to partners Terra Granger and Iris Balashev and their daughters. As a documentary crew films them, Iris enjoys painting using Andrew as a subject, trying to capture the essence of man. As the filmmakers then uncover, Andrew and Iris are conducting a forbidden romantic liaison.

No Men Beyond This Point is the second film for Mark Sawers, a Canadian director who previously premiered, after more than two decades work in short films and television, with Camera Shy (2012), a conceptually clever film about a man who discovers that everything he does in life is being filmed.

The idea of the women-ruled future has sporadically appeared on film. There was the silent film The Last Man on Earth (1924), the obscure musical-comedy It’s Great to be Alive (1933) and the British sex comedy Percy’s Progress (1974), which all concerned the last fertile man left alive and were usually comically centred around his becoming sought by all women, as also was the later Polish Sex Mission (1984) about two male scientists being unfrozen in an all-female future. The female-ruled society appeared in the Gene Roddenberry pilot Planet Earth (1974) – it is a surprise that it never appeared in Star Trek (1966-9) or any of the series that used the Society of the Week model – and the purportedly terrible British-German tv series Star Maidens (1976). There was also the Czech film The End of August at the Hotel Ozone (1965) set after the collapse of civilisation where women roam the landscape and come across the aging last man, and the US film The Last Man on Planet Earth (1999).

There have been books/stories on the topic such as Herland (1915) by Charlotte Perkins Gilmore, John Wyndham’s Consider Her Ways (1956) and Houston, Houston, Do You Read? (1966) by James Tiptree, Jr and the comic-book Y: The Last Man (2002-8). On the flip side of the coin, there was The Handmaid’s Tale (1990) set in a dystopian fundamentalist future dominated by a rising rate of female infertility and A Nation Without Women (2003) concerning a future India where the practice of female infanticide has caused a drastic shortage of women.

As a point of not reading too much detail about a film before watching (beyond knowing whether it has content I know I am going to review), I went into No Men Beyond This Point with a blank slate. My natural expectation as a result of a casual glance at the premise is that it would turn out to be an angry film with a radical feminist agenda more akin to something like Born in Flames (1983) and was perfectly prepared to view it evenly and see what it had to say.

I have to say though that I was completely surprised what the film ended up actually being. It takes the premise and runs with it in completely the opposite direction to one’s initial expectation. Moreover, it takes what could have been a highly divisive topic and comes out of it poking fun at all sides – both the substantial number of women in the audience laughed riotously, as did the various men also present, with nobody I spoke to coming out was left feeling upset.

Mark Sawers makes No Men Beyond This Point as a mockumentary. It is conducted with an extraordinary cleverness that blends mocked-up historical scenes and the use of real stock footage such that it is often hard to tell the difference. The cleverness of much of No Men Beyond This Point is that it exists as an alternate history. It is one where the filmmakers have conducted a smart and witty retelling of world history since the 1950s but where events have been rewritten with women in charge. Here we get counterparts to the hippie movement, the Women’s Lib movement and, in the end scenes, a direct parallel to Gay Rights and the movement for Marriage Equality – but all rewritten in terms of a women-ruled world.

There are all the clever throwaway touches that we get in an alternate history where the familiar is turned on its head, like where Patrick Gilmore introduces himself: “My name is Andrew Myers. I am thirty-seven years old and I am the youngest man alive,” which abruptly takes you back, or little touches like the girls driving away the aging men friends who come to talk to Patrick Gilmore “Get away you manosaurs. Isn’t there supposed to be a law against more than two of you gathering?” Or background pieces where we see that a women-influenced path of history has led to a curtailment of social progress with no internet or Moon Landing and where the videogame they are playing in the men’s preserve is a widescreen version of an antiquated Pong game.

There is a sublime cleverness to the way everything in the film plays out. It is a sublimely well-thought out scenario – even touches like the world where all of the women’s menstrual cycles harmonise, resulting in the need to have a three day holiday every month. Mark Sawers keeps dealing with every logical objection we might have to the world we are in. You keep thinking – but wouldn’t some of the women still desire men and Sawers deals with that one in an hilarious little twist on everything right at the end and one that keeps on playing itself out with side-splitting results in several scenes thereafter – the children’s reactions to watching the couple kiss are hilarious. The ending the film arrives at is incredibly funny.

Mark Sawers says he intended No Men Beyond This Point to be a film that he could shoot in his own home and didn’t need to wait for funding. The film was shot on a small budget but with that manages to accomplish considerable things like depicting various eras of world history that range from the 1950s to the present-day.

All of the cast play in perfect deadpan without breaking role once. Perhaps the funniest of these performances comes from Cameron MacDonald as the angry men’s rights advocate. This is one of those films that you suspect watching the out-takes and deleted scenes would make for something even funnier still.