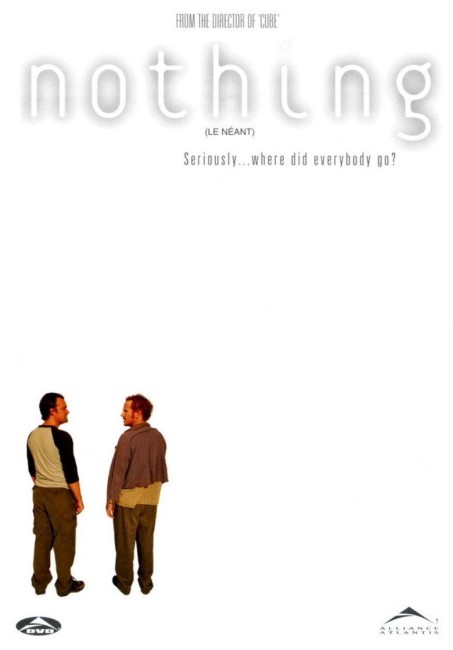 David and Andrew have been friends since childhood and live together in Andrew’s house located between two Toronto freeways. Life has not gone as either intended – David’s plans to be a rock star having amounted to nothing through lack of talent, while Andrew suffers from anxiety to such a degree that he can no longer go out of the house. David suddenly announces that he is going to move in with his girlfriend Sara. However, at work that day David is fired, accused of having embezzled $27,000. When he goes to move in with Sara, he finds that she has been using him the entire time to get his password to steal the money and has framed him to take the rap. At the same time, Andrew finds himself accused of kissing a Girl Guide who came to the door. David returns to the house, just as they are informed by the city that the house is due for demolition at 3 pm. As 3 pm comes, the demolition people and police all close in, but vanish. David and Andrew open the door to find that the house is now in a completely featureless white void. They try to explore their surroundings but discover there is nothing whichever way they go. They realize that they somehow managed to mutually cause the world to disappear because they were both hating it and wishing everything would go away. They find that they are able to cause anything they hate to disappear. Andrew uses this ability to banish unpleasant memories and reform his personality into something stronger. However, when the two of them argue, this vanishing ability turns into a vicious battle.

Canada’s Vincenzo Natali has emerged as one of the most promising genre talents of the last few years. Natali first appeared with Cube (1997), a fascinating conceptual puzzle film that became an international festival and arthouse hit. Natali subsequently went on to make Cypher (2002), an equally fascinating film about brainwashing. It is possible that Vincenzo Natali may become one of the most talented independent genre voices of the new millennium – time will tell. Subsequent to Nothing, Natali made the genetically-engineered creature film Splice (2010), the ghost story Haunter (2013), the U is for Utopia segment of ABCs of Death 2 (2014), the Stephen King adaptation In the Tall Grass (2019) and was long attached to the adaptation of J.G. Ballard’s High-Rise (2015) and William Gibson’s Neuromancer (1984). Natali also executive produced the Found Footage surveillance stalker film 388 Arletta Avenue (2011).

Vincenzo Natali likes to make films that each come with conceptual physical limitations. Cube entirely took place on a single set, which was merely lit in different ways to suggest different rooms, while his earlier short film Elevated (1997) was a monster movie that took place in an elevator. Natali goes one even further with Nothing, which takes place in a blank white void and comes without any sets whatsoever (excepting that of a house). It may well be that Natali was inspired by George Lucas’s THX 1138 (1971) where the middle of the film similarly took place in a prison that consisted of a featureless and shadowless white-on-white void. That perhaps and the amusing Star Trek: The Next Generation episode Remember Me (1990) where Dr Crusher’s world suddenly starts disappearing.

Of course, a film that takes place in a void of nothing and has only two characters (apart from one or two minor characters that appear in the first few minutes) is limited in being able to tell a dramatic story. To his credit, Vincenzo Natali manages to do so – and to create a story that is constantly fascinating and conceptually challenging. Certainly, there are times Natali has had to employ various visual tricks – cut-up frames, super wide-angles, shots from underneath the void and even a pie-cut frame just to add some variety to the monotony of the visual scheme.

On the other hand, the visual sameness leads to a number of hilarious sequences – like the image of David Hewlett trying to sneak up on the presumed intruders in the house while attempting to seek cover in an entirely featureless white void. The film manages to get far more out of the basic concept than one might think and there is a conceptual ingenuity to the scenes of the two exploring the void. The basic concept gets a rigorous workout and Nothing starts to get into some fascinating territory during the last third when it has the two ‘hating’ away things and then engaged in a war with one another.

Nothing is certainly a good deal lighter than Vincenzo Natali’s two previous films. It has been construed as an offbeat slacker comedy of sorts. The opening, for instance, comes with a long preamble of title cards: “The events portrayed in this motion picture are true/Once again, and it cannot be stressed enough, it is vitally important to understand that every single thing in this movie is true/Totally and completely true.” There is an equal quirkiness to the depictions of the real world – the Toronto skyline and the block of apartments where David Hewlett’s girlfriend lives are both photographic collages rather than real buildings.

There are certainly times that you get the impression that Natali does not like his two central characters and the film often feels like a conte cruel arranged against them. There is an undeniably likeable eccentricity to Nothing. The last third features some demented images with the two squabbling and wishing at first objects and then bits of the house and then each other’s body parts away until the two of them are reduced to two disembodied heads bouncing around in the void.

The ending with the two heads hopping off into nowhere followed by the turtle is delightful, although for those who watch all the way past the credits to the very end there is a baffling coda set ten years later where the two heads are still bouncing about, bearded and bedraggled, and then the void is suddenly invaded by a herd of elephant noises.

(Winner for Best Original Screenplay at this site’s Best of 2003 Awards).