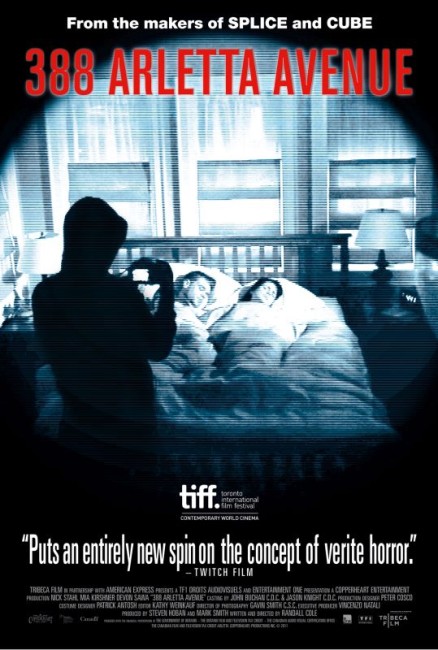 A mystery stalker begins to watch Toronto advertising agent James Deakin and his wife Amy, filming them with a video camera. The stalker sneaks into their house and James’s workplace to install hidden spy cameras. James then returns home from work to find Amy missing. He becomes increasingly concerned when he hears nothing from her. He questions her friends and family, even contacts an old schoolmate he once bullied thinking that he may have taken her. The stalker meanwhile continues to taunt James by abducting and replacing their cat with an almost identical one. The search for Amy and her abductor leads James into increasingly more desperate places.

It is not that the Found footage film has not explored the psycho film’s potential before. There was the highly effective The Poughkeepsie Tapes (2007) from the Dowdle Brothers and Sean Tretta’s The Great American Snuff Film (2003), which both did a disturbing job of taking us inside the headspace of a serial killer. Even more disconcerting was Shane Ryan’s Amateur Porn Star Killer (2007) and sequels wherein Ryan himself played the title killer as he films himself seducing and killing young girls on camera. Perhaps the closest to 388 Arletta Avenue was Evil Things (2009) where a group of friends with a camera were stalked by a killer who also had a video camera.

Compared to these, 388 Arletta Avenue is disappointingly more traditional in its approach. Rather than take us inside the mind of the serial killer as The Great American Snuff Film did, or make us party to and complicit in the killer’s actions like the Amateur Porn Star Killer films did, it follows more familiar thriller patterns. The focus is on things as seen through the eyes of the victim – indeed, we never even get to see Nick Stahl’s mysterious taunter anywhere throughout. Everything is filmed via a series of surveillance cameras that have been hid in such improbable places as his bedside alarm clock, his workplace keyboard and all around his car.

Mostly, the film cycles around familiar thriller tropes – the hero implicated in difficult situations with the cops, they unwilling to take his missing persons complaint seriously, the killer taunting Nick Stahl with knowledge of what he did. Indeed, the film feels like it could almost be a Found Footage version of The Vanishing (1988).

Randall Cole generates some okay tension – the preposterousness of how it sounds when Nick Stahl tries to explain to cops that the stalker broke in and substituted an identical cat, the moment the baseball is thrown through his window, the taunting games that the stalker plays with Golden Oldie songs, Stahl receiving a visit from the cops come to pursue an harassment claim laid by the man he just killed. However, there is never anything that pushes the material in a way that generates seat-edge suspense or genuinely jolts us, and little in the film that feels like anything we have not seen before.

Perhaps the most unusual thing about 388 Arletta Avenue is the extent to which its story was mirrored by real-life. Three weeks before the film’s general release in Canada, star Nick Stahl, who plays a husband trying to find his missing wife, was listed as a missing person by his own wife Rose. Stahl did turn up a week later, having checked into rehab for alcohol abuse. As one watched the film, it proved an uncanny case of life mirroring art – one where you cannot help but sneakingly wonder if Stahl’s disappearance was not mounted a massive publicity stunt to promote the film.