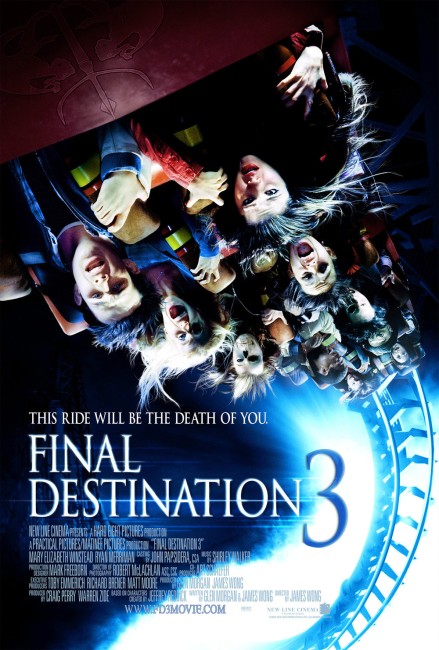 Just before graduation in McKinley, Pennsylvania, a group of high school seniors are about to go on a rollercoaster ride at a local amusement park. Wendy Christensen has a vision that the ride is about to crash and screams out to stop. She and several others get off before the rollercoaster goes ahead and crashes, killing Wendy’s boyfriend and several others. Afterwards, Wendy and fellow survivor Kevin Fischer realize that they have managed to cheat death due to her premonition. They try to warn the other seven survivors as fate plans a series of bizarre deaths for them.

Final Destination (2000) was a modest hit in the modern fad for teen horror films. Final Destination 2 (2003) was the inevitable sequel and this was the third film in the series. Alas, the idea behind Final Destination, of someone having a precognitive dream about a disaster and then being hunted by fate, is not particularly well suited to being spun out as a horror franchise, largely because none of subsequent films in the series do anything to explain the agency behind things. The premise has been even further drawn out as a series of novelisations, which repeat the same limited formula that the films do.

Final Destination 3 brings back the directing/writing team of Glen Morgan and James Wong who wrote and directed the first Final Destination. Initially, Morgan and Wong seemed a highly promising creative team as a result of Penelope Spheeris’s The Boys Next Door (1985) and their excellent writing work on tv series like The X Files (1993-2002, 2016-8), Space: Above and Beyond (1995-6) and Millennium (1996-9). The two made several previous outings onto the big screen with Final Destination, The One (2001), Willard (2003), this and Black Christmas (2006) – both writing and producing and alternating the directing duties between them. However, all of these films have severely disappointed on the promise that Morgan and Wong once seemed to hold. They appeared to part ways after this with James Wong going on to direct Dragonball: Evolution (2009), produce the tv series’ The Event (2010-1), American Horror Story (2011– ), Scream Queens (2015-7) and Next (2020– ) and to write the tv mini-series remake of Rosemary’s Baby (2014) without Morgan, while Glen Morgan on his own subsequently signed on as a producer of tv’s Bionic Woman (2007), Tower Prep (2010), The River (2012), Intruders (2014), Lore (2017-8) and The Twilight Zone (2019-20).

All that Final Destination 3 has done is a shuffled around the familiar elements – a rollercoaster instead of a plane or car crash and a good many novelty deaths. There is brief mention of the accidents from the first two films to tie continuity in. (Tony Todd also appears in all three films, although only voices the fairground devil figure here). Though they created the Final Destination franchise, Wong and Morgan infuriatingly refuse to explain any of its workings, even when handed the perfect opportunity to do so here. The Final Destination series keeps begging questions as to why fate has a purpose and despatches Death when it is thwarted, or how some people get these visions that allow them to cheat their deaths. The explanations go no further here than vague lines like “Death is a force” or “Every action has an equal and opposite reaction”. The film also has a downbeat ending, which was apparently added as a result of audience test screenings, that cuts to a subway train several months later where several of the principals re-gather seemingly at random but one fails to understand what is meant to be going on in this scene.

Final Destination 3 is flat. The deaths lack the same bizarre novelty value they did in the first film. The one thing that Morgan and Wong do is throw in much more gore than the original had – heads split open, a severed torso, bodies charred in sunbeds, a girl impaled on a flag a la The Omen (1976) and a nailgun shooting nails right through someone’s face. (Although the girls cooked in the sunbed gag previously appeared in Urban Legends: Bloody Mary (2005), which came out seven months earlier than Final Destination 3). The characters are entirely generic and have no depth, although these are at least cast with Ryan Merriman, an actor who has shown promise before – notably tv’s Taken (2002) – and Mary Beth Winstead who is intelligent in an otherwise negligible role.

One notable thing about Final Destination was that Morgan and Wong tipped their fannish interest in horror by naming characters after early horror directors. They return to the same here with characters named after:– Benjamin Christensen, director of the classic witchcraft documentary Häxan (1922); Carl Dreyer of Vampyr (1932) fame; Victor Halperin of White Zombie (1932) fame; cinematographer Karl Freund, director of The Mummy (1932) and Mad Love (1935); genre legend George Romero of Night of the Living Dead (1968) and Dawn of the Dead (1978) fame; Edgar Ulmer, the director of The Black Cat (1934); a Jason Robert Wise after Robert Wise, director of The Day the Earth Stood Still (1951), The Haunting (1963) and The Andromeda Strain (1971); even a character named Polanski.