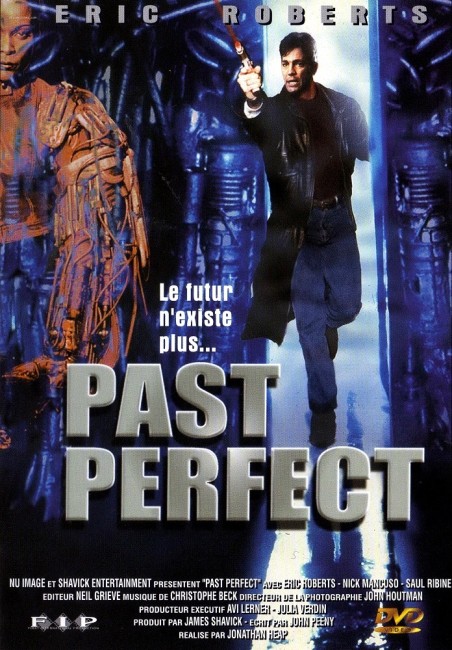 Seattle police detective Dylan Cooper is on an angry crusade against out-of-control offending youth who manage to slip through the system unprosecuted because of their age. He believes they are irredeemable and should simply be eliminated. He apprehends a group of drug-dealing youths during a chase and shootout. However, after they are freed, he finds that someone is killing each member of the group. As he steps up to protect the ones still alive, he realises that he is facing a group of law enforcement officers from the future who have returned in time to eliminate hardened criminals before they grow up.

Past Perfect comes from Nu Image, an American production company that makes a good many B-budget video-released action films. It is another variant on The Terminator (1984) with a contemporary hero trying to stop assassins from the future. Indeed, it could be The Terminator with a social worker’s conscience (or at least a social worker with the sensibilities of Dirty Harry) in its improbable scenario involving assassins trying to eliminate kids in the present before they grow up into the hardened criminals of the future. This in many ways prefigures Steven Spielberg’s Minority Report (2002) with the idea of a future police force trying to prevent crime before it happens.

However, there is little to Past Perfect beyond being a routine B-budget sf/action film that has been largely predicated on serving up an action sequence at regular intervals every few minutes. These are unexceptional, although there is a decent car chase sequence through a maze of shipping containers that comes with the nifty concept of the drivers having to dodge illusory objects placed in their way and not being sure whether things blocking their path are real or not.

In terms of its sensibilities, Past Perfect is also an oddly schizoid film – and this is something that makes it quite interesting. It starts out as a standard action scenario, tapping into the same libertarian ultra-right wing view of law enforcement as espoused by Dirty Harry and most characters played by Sylvester Stallone. At one point, Eric Roberts opines: “These kids aren’t anything but future pieces of shit.” In one scene, he comes across a juvie perp who boasts about getting his indictment reduced to rehab and avoiding two strikes and then complains about his rights, whereupon Roberts pulls a gun: “You have the right to remain silent.” Boom. “Forever.”

The film opens with a lengthy voiceover from Roberts: “People ask from time to time how we got to this point – What went wrong? Why did it happen? Some say it’s because there’s a new gun on the streets every thirty seconds and we don’t have enough police to fight back. Others say it’s because they don’t have a mother and father in every home. Both could be right, but that doesn’t fix the problem. The time for debate is over – too many lives have been lost, it’s time to take action.”

The really interesting thing about the film is that, while such would be extreme but fairly standard morality to be espoused by a Dirty Harry-type action hero, the film actually turns around and starts to question such views. It starts to seem a peculiarly schizoid film when, for all Eric Roberts’ views about the kids being “future pieces of shit”, you notice that the film has a plot where his character is defending the lives of said kids against future law enforcement officials who are determined to eliminate them as being these very same worthless pieces of shit ie. a plot that does essentially require Roberts to believe in their humane treatment and by implication redeemability.

The film eventually reaches a point where it reverses the outlook that it opened in with – Roberts’ opening voiceover is replayed as the film goes out but this time changed to end with: “I specifically order an emissary of the court to go back in time and present the perpetrators of these crimes the opportunity to change the course of their lives. Whether or not they take this opportunity is up to them.”