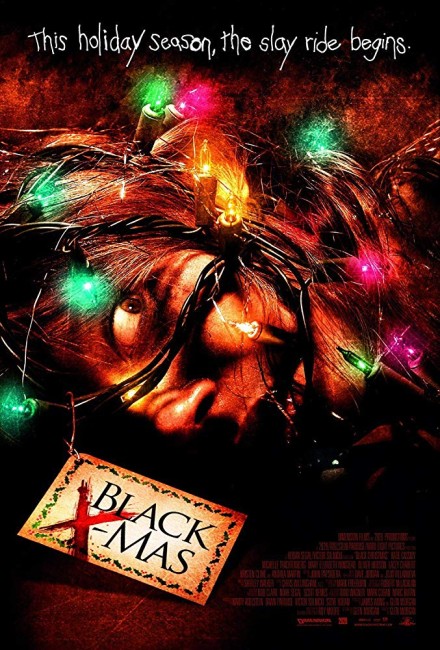 As Christmas nears, a group of girls are left behind at the Delta Alpha Kappa sorority house at Boston’s Clement University. They learn the story of Billy Lenz who used to live in the house. Billy had a liver condition that gave him yellow skin and was kept locked in the attic by his abusive mother. In a drunken spell, she had sex with Billy and became pregnant, giving birth to a daughter that she named Agnes. Billy then escaped, killed his mother and baked her flesh as Christmas cookies. Now, Billy has escaped from the Clark Sanatorium and returns to the house. Seeking to be reunited with his family, he starts slaughtering the girls.

The original Black Christmas (1974), also known as Silent Night, Evil Night, is often cited as the first slasher movie (although there have been other nominated contenders). Made by Bob Clark, it featured many of the tropes that would later solidify as the slasher film – an isolated houseful of girls being stalked by a killer; taunting phonecalls that people realise are coming from inside the house; the despatch of people as they wander off alone. Black Christmas 1974 was also a cut above the slasher films that followed, being written with some wryly witty characterisations and holding a number of surprises and a twist ending that people always remember.

The Black Christmas remake comes from the team of Glen Morgan and James Wong. Morgan and Wong began as a writing team, turning out some of the better episodes of tv series like The X Files (1993-2002, 2016-8) and Millennium (1996-9), before going onto to create the great space war series Space: Above and Beyond (1995-6). They emerged as a cinematic directing-writing partnership with the hit teen horror Final Destination (2000) and went onto make the likes of The One (2001) and Final Destination 3 (2006), as well as the remake of another 1970s horror film with Willard (2003). While their tv work is exemplary, Morgan and Wong’s directorial efforts leave much to be desired and are lacking in the wryly perceptive writing that marked their tv work. Starting with Black Christmas, the pair seem to be heading in differing directions – Wong is only present as producer here and went onto direct Dragonball: Evolution (2009), to produce the tv series The Event (2010-1), American Horror Story (2011– ) and Scream Queens (2015-7) and write the tv mini-series remake of Rosemary’s Baby (2014) without Morgan, while Morgan on his own subsequently signed on as a producer of tv’s Bionic Woman (2007), Tower Prep (2010), The River (2012), Intruders (2014), Lore (2017– ) and The Twilight Zone (2019– ).

Black Christmas, or if you read the dvd cover Black Xmas, received some very negative reviews when it came out. It is a film that I wanted to like. There are a number of aspects that promise that it is going to be an above average slasher film. Glen Morgan starts in with a darkly acerbic bite – like where Santa visits the asylum and watches as Billy’s Christmas dinner is served, where he is told: “Tastes like chicken because it’s chicken. Closest we could to how mom used to taste.” Morgan holds little back when it comes to gory despatches. Some of the exchanges between the girls are written with a sarcastically appealing bite, where Morgan, in surprising contradiction to most other slasher films, even has the group having a debate about the best strategy for their mutual survival.

Glen Morgan plays the Christmas angle up far more than the original. He takes the opportunity to lay into Christmas spirit with a dark bite. One of the girls at the sorority house even has a speech pointing out how all of the elements of Christmas originate from pagan rather than Christian tradition. Morgan throws in a number of Christmas-themed killings a la Silent Night, Deadly Night (1984) – a candy cane impaled in the asylum guard’s neck, victims strangled with cords of Christmas tree lights, a Christmas tree with severed eyeballs and a head used as ornaments. Determined to push good taste as far as possible, Morgan even includes a scene with Billy’s mother having sex with him on Christmas Eve and a later scene with Billy battering his mother’s head in with a rolling pin and then making Christmas cookies out of her skinned flesh.

When it comes to comparisons with the first film, it becomes clear that Glen Morgan has thrown out at least half the original. There is still the basic premise of the girls in the sorority being stalked by a killer over Christmas. The killer still makes phone calls, although this has been updated to the era of cellphone technology. A handful of characters have the same names as the originals and Morgan has even cast Andrea Martin who played one of the girls in the original in the role of the housemother Mrs Mac. As the slasher movie did not exist when the original was made, Morgan has taken the opportunity to bump up the number of victims present. There are several familiar images from the original – the girl with the plastic bag over her head on the rocking chair in the attic; the scene where someone is stabbed with the horn of a glass unicorn.

On the other hand, there are a number of distinctive aspects of the original that are notedly missing – gone is the subplot about the heroine’s boyfriend being a suspect, which leads to the elimination of the twist ending where he is shot by police thought to be the killer and the film fades out with the real killer still in the house. This twist and the last image with the body of the girl with the plastic bag over her head still rocking in the attic window were two distinctive aspects of the original that people always remember but here both have been tossed out for a generic slasher movie ending.

Glen Morgan seems to have fallen prey to the modern disease that many remakes suffer from – the need to explain and give motivation to everything in the original – and sees fit to create a motivational backstory to the killer’s past. Billy’s childhood is mapped out with considerable detail to the extent that the backstory takes up nearly half of the early parts of the film. By contrast in the original, we never even got to see the killer’s face or discover what his identity was. The remake also gives life to Agnes, which was only a name cryptically mentioned at the end of the original. Unfortunately, while the remake keeps Billy’s (and Agnes’s) faces hidden until the end, the revelation of who they are proves to be of no relevance at all. With sickly piss-yellow skin, Billy also cannot help but remind of The Yellow Bastard in Sin City (2005).

What you cannot deny is that Glen Morgan does deliver the slasher movie goods, even if Black Christmas 2006 never transcends being a particularly good film. It is certainly a slasher remake that has far more in the way of teeth to it than the pallid remake of Prom Night (2008). Even so, the film starts to drag by the time it gets to the hospital and has the killer returning from the dead and pursuing Katie Cassidy.

This was followed by a subsequent remake Black Christmas (2019)