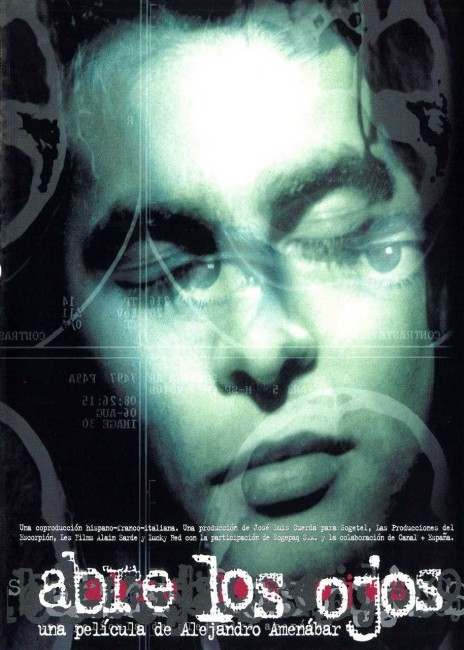 Cesar is a handsome playboy who makes a virtue of sleeping only once with each woman he seduces. At a party, he meets and falls in love with Sofia, his best friend’s date. However, his chances are ruined when Nuria, a vengeful former one-night stand, drives Cesar and herself over an embankment. Cesar survives but his face is hideously and irreparably scarred. Reduced to wearing a mask to hide his deformity, he feels rejected and suicidal. However, a miraculous new surgical technique offers the opportunity for a complete recovery. Happy again, he and Sofia become involved. However, things become unsteady as his old scarred face keeps reasserting itself. He then wakes up to find that Nuria is his girlfriend, not Sofia. He is driven crazy as all evidence indicates and everybody believes that she is Sofia. Crazed, he murders her. Placed in a cell for the criminally insane, a psychologist tries to help him break through. He comes to see that the answers to his reality flips lie at a mysterious cryonics institute.

Open Your Eyes is a remarkable film. At face value, it might seem to be a work of surrealism. It takes one through a bewildering series of reality flips – where the hero’s initially handsome face is alternately hideously deformed and then whole again; where Penelope Cruz becomes his girlfriend and then inexplicably becomes a psychotically unbalanced ex who everybody but the hero insists is Penelope Cruz.

It is hard not to get the impression that Open Your Eyes is an arty experimental surrealist film but such is far from the case. It is impossible to discuss the film without giving away its science-fiction ending, which gives the bizarre reality flips a dazzlingly logical explanation. [SPOILER ALERT]. At the ending, the reality flips and disjunctions that the hero has been experiencing are revealed as being part of a Virtual Reality illusion. The it-was-all-a-VR-illusion ending had become a tedious cliché in films like Mindwarp (1992), Arcade (1994), Brainscan (1994), eXistenZ (1999) and The Thirteenth Floor (1999), but Open Your Eyes was one of the first films that made such an ending work. It does this largely by nesting the revelation inside a Chinese box of baffling twists, reality flips and clues such that when the ending comes it provides an audaciously logical explanation of everything that has preceded rather than, as in many of the aforementioned, an out-of-the-blue twist that abruptly cuts the culmination of bewildering events off without any self-contained explanation.

The film consciously echoes with references to The Cabinet of Dr Caligari (1919) – the great silent German film set inside a distorted world that was eventually revealed to be inside the imaginings of a madman. The hero is even named Cesar after the hero of Caligari. Few films have been audacious enough to mimic The Cabinet of Dr Caligari‘s interior world, which was built using distorted exaggerated sets. However, Open Your Eyes ingeniously updates a Cabinet of Dr Caligari in terms of modern science-fiction where the hypnotized subjective world of the madman being controlled by a hypnotist/psychologist has been replaced by that of Virtual Reality illusion.

The direction comes plain and unadorned. Director Alejandro Amenabar does not need visual tricks, it is the story that carries the film. The middle of the film is filled with a haunting sense of social isolation at Eduardo Noriega’s deformity. When Amenabar does show his hand it is with striking effect – like the moment in a nightclub where scientist Gerard Berray tries to tell Eduardo Noriega that he can control the reality around him and Noriega says if he could he wishes everybody would be silent and abruptly they suddenly do. There is one beautifully poetic moment where the deformed Eduardo Noriega follows a clockwork mime artist with painted white face and stands watching her as a sudden downpour of rain wipes her makeup away to reveal Penelope Cruz beneath.

Open Your Eyes was an arthouse hit in the West. An English-language remake was duly conducted as the also worthwhile Vanilla Sky (2001) starring Tom Cruise in the Eduardo Noriega part and retaining Penelope Cruz in the same role here. Although disliked by many, this is surprisingly faithful to Open Your Eyes.

Chilean-born, Spanish-based director Alejandro Amenabar had previously made the snuff movie thriller Thesis (1996). Following Open Your Eyes, Amenabar then had a big breakthrough with the fine Hollywood-financed ghost story The Others (2001), which, like Open Your Eyes, also maintained a startling climactic reversal of audience assumptions. Amenabar then made the arthouse and awards celebrated The Sea Inside (2004), a non-genre film about the right to euthanasia, followed by the historical film Agora (2009), Regression (2015) about False Memory Syndrome of Satanic ritual abuse and the historical film While at War (2019).