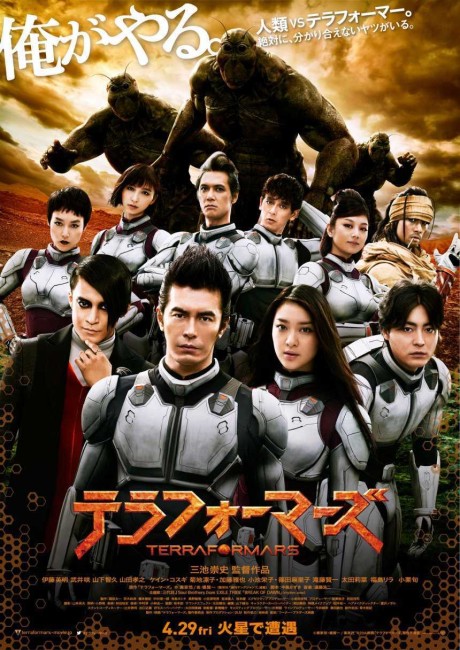 The year 2599. A group of criminals are asked to sign up to Bug-1, an expedition to Mars. Five hundred years earlier, Mars had been seeded with moss and cockroaches in an effort to terraform it into an Earth-like world. The ship lands where the group learn that their mission is to eliminate the cockroaches. Instead they discover that the cockroaches have mutated due to cosmic radiation and have now evolved to walk upright. Ko Honda, the scientist that began the expedition, informs the group that they have all that they have been injected with insect DNA. This gives them each unique insect-like superpowers. It is their assignment to use these abilities to eliminate the evolved cockroaches. As they set about doing so, they discover that Honda has made deals with the cockroach leader behind their back.

Japan’s Takashi Miike is a cult director. Miike gained a name for himself with films like Audition (1999), Ichi the Killer (2001) and Visitor Q (2001) that were celebrated by audiences because of the ultra-violent extremes he pushed them to. Miike has been prolific since the early 1990s, putting out 3-4 films per year, sometimes twice that. In more recent years, he has begun to veer off into a series of strange head-scratching experiments with the likes of Big Bang Love, Juvenile A (2006), Sukiyaki Django Western (2007), God’s Puzzle (2008), YatterMan (2009) and Yakuza Apocalypse (2015). (See bottom of page for a full list of Takashi Miike’s other genre films).

This film is based on the manga Terra Formars (2011- ), which appeared in Weekly Young Jump magazine and is still being published. As in the film but with a much more protracted plot, the manga concerns a crew of astronauts who are sent to Mars to eliminate evolved cockroaches and are given insect-based genetic mutations that in effect give them superpowers. The manga was adapted into a two-part OVA film that appeared in 2014 and then two anime series, Terra Formars (2014) and Terra Formars: Revenge (2016), followed by this live-action film adaptation.

Takashi Miike has adapted manga and anime before with Ichi the Killer, YatterMan and the subsequent Jojo’s Bizarre Adventure: Diamond is Unbreakable Chapter 1 (2017). Terra Formars comes in the same vein as the madcap YatterMan. Miike quickly abandons anything to do realism and delivers a crazed film from about the point that it is revealed that all of the spaceship crew have been given insect DNA and can take injections that transform them into different insect hybrids to fight off the cockroaches. The film even pauses each time one of these is introduced to tell us which insect the behaviour is modeled on.

Expectedly with Takashi Miike in the director’s chair, the film heads into madcap places from about the point we have the astronauts facing tsunamis of cockroaches where they make an escape with the aid of one crewmember who has the ability to blast a jet of flame from his mouth and attaches himself to the roof of the vehicle propelling it at super-speed. By the time we get to the cockroaches using cellphones, the crew displaying insect mind control abilities and then taking super-doses of the serum and engaging in superheroic martial arts battles with the cockroaches, the film is well and truly in orbit.

The film is somewhat weakened by so-so CGI particularly when it comes to the evolved cockroaches. The plot is much of a muchness that merely consists of Miike bringing on another wacky insectoid transformation every few minutes. Much of the show feels rushed. Nevertheless, it has the good old Takashi Miike dementia that makes for an entertaining show while it lasts.

Takashi Miike’s other genre films are:– Full Metal Yakuza (1997), a yakuza/cyborg film; the teen film Andromedia (1998) about a schoolgirl resurrected as a computer program; The Bird People in China (1998) about the discovery of a lost culture; Audition (1999); the Yakuza film Dead or Alive (1999), which comes with a totally gonzo sf ending; the surreal Dead or Alive 2 – Birds (2000); the six-hour tv mini-series MPD Psycho (2000) about a split-personalitied cop tracking body-hopping terrorists; the surreal black comedy The Happiness of the Katakuris (2001); Ichi the Killer (2001), a Yakuza film with some extreme torture scenes; the controversial taboo-defying Visitor Q (2001); the outrightly science-fictional, future-set Dead or Alive: Final (2002); the surreal Yakuza film Gozu (2003); One Missed Call (2003) about ghostly cellphone calls; the ultra-violent Izo (2004) about a cursed, immortal samurai; an episode of the horror anthology Three … Extremes (2004); the superhero film Zebraman (2004); the fairytale Demon Pond (2005); the supernatural fantasy epic The Great Yokai War (2005); Big Bang Love, Juvenile A (2006), a prison murder mystery with SF elements; the SF film God’s Puzzle (2008); YatterMan (2009), a gonzo live-action remake of a superpowered anime tv series; Zebraman 2: Attack on Zebra City (2010); the videogame adaptation Ace Attorney (2012); Lesson of the Evil (2012) about a murderous high school teacher; As the Gods Will (2014) with high school students being slaughtered by a doll; Over Your Dead Body (2014) wherein the roles in a ghost story play come to replay themselves in the lives of the actors; the gonzo horror film Yakuza Apocalypse (2015); Blade of the Immortal (2017) about an immortal samurai; JoJo’s Bizarre Adventure: Diamond is Unbreakable – Chapter 1 (2017); Laplace’s Witch (2018); and The Great Yokai War: Guardians (2021).