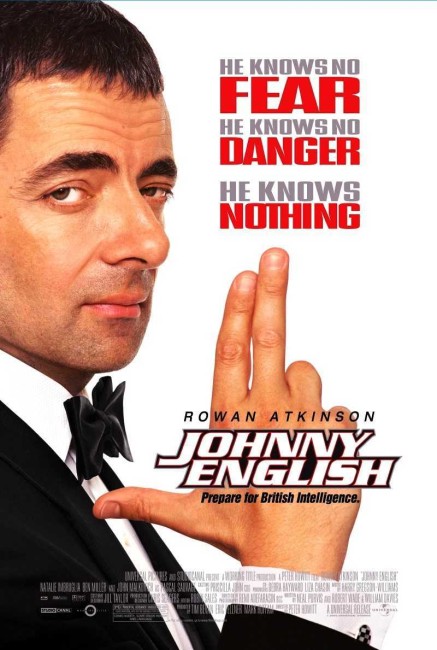 After all MI7 agents are accidentally eliminated in an explosion, the only agent left is the bumbling Johnny English. English is assigned to security detail as French prisons billionaire Pascal Sauvage unveils the newly restored Crown Jewels – only to have them stolen from under his nose during the ceremony. English believes that Sauvage is the one behind the theft and defies orders to pursue him. Joined by Interpol agent Lorna Campbell, English uncovers and determines to thwart Sauvage’s nefarious scheme to force the Queen to abdicate, have himself declared the King and then turn England into a giant prison.

Johnny English gives the impression of having been hastily improvised to exploit the fad for spy spoof films that emerged following the cult success of Austin Powers, International Man of Mystery (1997) and sequels. It stars Rowan Atkinson, the cream of the current crop of British tv comics. Rowan Atkinson first emerged on Not the Nine O’Clock News (1979-82) and then gained immortal fame as the star of the four Blackadder series between 1983 and 1989. In recent years, Atkinson went onto star in the various Mr Bean specials beginning in 1989, which resulted in one spinoff movie Bean (1997).

Johnny English is really Mr Bean as an Austin Powers movie. The character is based on a series of commercials that Rowan Atkinson made for the English credit card company Barclaycard that aired on tv during the 1990s. Although, Atkinson’s bungling spy character could perhaps also be seen to have its antecedent in the part of Nigel Small-Fawcett that Atkinson played in the James Bond film Never Say Never Again (1983).

With Blackadder, Rowan Atkinson established himself as a master of bitingly acerbic sarcasm, sitting loftily above the idiots around him, delivering pithily trenchant putdowns in only the way that Ben Elton can write them. With the Mr Bean shorts, Atkinson set aside the caustic bite of British humour and ventured into physical slapstick. Mr Bean is almost a modern day descendent of someone like Charlie Chaplin – the character rarely has dialogue and the comedy is almost entirely visual slapstick. Mr Bean is more akin to Chaplin put through the peculiar mercilessness of British college humour, wherein a basically absurd situation keeps being compounded further and further to the point that one is rolling on the floor at the cruelty of it.

Johnny English certainly conducts a smart move over and above other Austin Powers imitators – it hires two screenwriters that actually worked on the James Bond films – Neal Purvis and Robert Wade who between them wrote The World is Not Enough (1999), Die Another Day (2002) and all of the Daniel Craig films, as well as the superb alternate history mini-series SS-GB (2017). The World is Not Enough was a well-above-average intelligence Bond film, one of the best series entries in some two decades. (Even so, the plot that Wade and Purvis come up with here is fairly far-fetched, even as these spy spoof films go).

Alas, Johnny English befalls a director who shows astonishingly little adeptness for comedy in Peter Howitt. Howitt was previously known for the Gwyneth Paltrow alternate timelines romance Sliding Doors (1998), the computer-tech thriller Antitrust (2001) and the subsequent post-holocaust film Scorched Earth (2018) and it is he that kills the film.

Howitt has an almost complete lack of ability when it comes to directing this type of physical slapstick. He sets up various gags – Rowan Atkinson invading a hospital mistakenly thinking it is the villain’s headquarters, interrupting a funeral at gunpoint thinking the mourners are villains, pretending to fight an assailant behind a door in front of a crowd of onlookers, tomfoolery mixing up paralysis and truth serum rings and so on.

If this were one of the Bean shorts, you can imagine how each gag would be compounded and keep on going until one was lying in stitches. Here the gags just sit there and Peter Howitt’s camera does little more than observe the actors playing them out. Howitt has no idea how to find or milk the cruelty and mercilessness of the situation. The audience I was with rarely even laughed throughout the film.

The one thing that does strike you about Johnny English is the sheer cultural vulgarity of the film – the French are insulted, the Queen is forced to abdicate with one of her corgis being held at gunpoint, while the Archbishop of Canterbury has his bottom exposed in front of assembled dignitaries in Westminster Abbey.