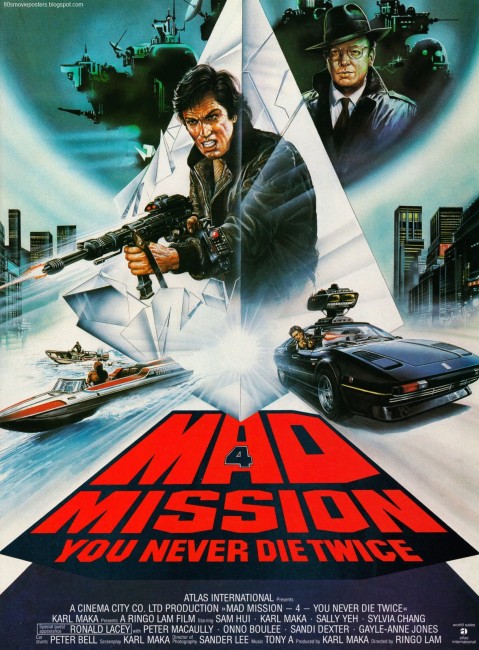 aka Mad Mission 4: You Only Die Twice

The Hong Kong cop Kodyjack is asked to guard a prism that is capable of conferring superpowers. However, international mobsters want the prism and abduct Kodyjack’s ex-wife and demand he bring the prism to them in New Zealand.

The series also made a great point of parodying other films – the third film played on the James Bond series, even employing Bond actors such as Richard Kiel and Harold Sakata and Mission: Impossible (1966-73) head Peter Graves. Here the title is clearly intended as a spoof on the James Bond film You Only Live Twice (1967), while Ronald Lacey appears for a few minutes as the villain of the piece in clear imitation of his villain from Raiders of the Lost Ark (1981), even down to the same hat, leather coat and burnt hand.

The inspiration was clearly flagging by the time of this entry. The film has no pretence to anything more than providing a new action sequence about every five minutes, although these are routine and not terribly exciting. The level of the film is juvenile, down about the level of a five-year-old. One is reminded of the endless Bud Spencer-Terence Hill comedies made in the 1970s – although at least the action comes more competently than it ever did in the Spencer-Hill films. Most of the characters are incredibly irritating, especially Sally Yeh as the scientist’s daughter.

Aces Go Places 4: You Only Die Twice was one of the earlier films from Hong Kong director Ringo Lam. In the years ahead, Lam became known for action films such as City on Fire (1987), Full Contact (1992), Twin Dragons (1992), Maximum Risk (1996) and two other genre entries with the Wu Xia Burning Paradise (1994) and the Enlgish-language Replicant (2001) featuring a clone of Jean Claude Van Damme.