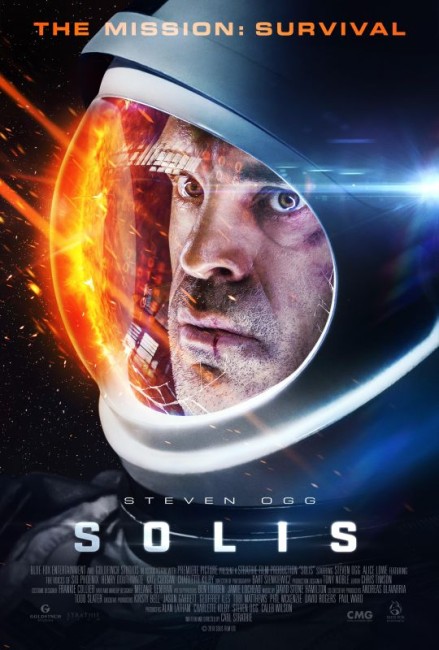 Troy Holloway, an employee of the Orbis Mining Corporation, comes around aboard an escape pod, finding he is seated alongside a dead crewmember from his ship. He is contacted by Commander Roberts aboard the spaceship Hathor informing him that he is on a course heading directly for the Sun. She is pursuing with orders to rendezvous and retrieve him. However, Holloway must deal with temperature and coolant issues aboard the pod. Faced with failing oxygen scrubbers, he must undertake a mission outside to fix them within a narrow window when the pod is in shadow from heat that could incinerate him.

Solis has undeniable resemblance to another British film that came out a little earlier – Capsule (2016) from director Andrew Martin. Both films appropriate the premise from Buried (2010), of one man inside a coffin where the camera stayed with him for the duration. Both films follow the premise of Buried, albeit with the coffin being replaced by a space capsule. (although here Steven Ogg has a corpse seated next to him for much of the journey). In all three films, the only others the central character interacts with are those on the radio (a cellphone in Buried).

Capsule was set in Earth orbit during some alternate history version of the Cold War where the UK had a manned space program and the hero was torn between conflicting radio signals coming from the US and Soviet Union. By contrast, Solis takes a leaf or two from Sunshine (2007) and has the escape pod on a collision course with the sun and the sole survivor having to deal with various problems that threaten his survival as a pursuing vessel attempts a rescue. Capsule kept more faithfully to the containment of the premise whereas Solis expands out on it, having Steven Ogg move into other areas of the capsule to affect repairs and at one point conduct a hazardous repair mission on the outside hull of the ship.

Solis joins a bunch of films that have come out since the enormous critical success of Gravity (2013) concerning themselves with realistically detailed space missions and/or disasters that occur in the course of a space mission. These include Ridley Scott’s The Martian (2015), which proved almost as big a success as Gravity, and other works such as Europa Report (2013), Approaching the Unknown (2016), Life (2017), The Space Between Us (2017), Ad Astra (2019) and on the tv screen The Expanse (2016– ), The First (2018) and the National Geographic channel docudrama series Mars (2016-8), as well as the real-life based films Salyut 7 (2017) and First Man (2018).

Unlike most of these others, Carl Strathie doesn’t set the film in the very near future but at a point further ahead when the Solar System has been opened up (at least to mining). The other difference is the script’s lack of focus on the science. Thus when the rescue starts going sideways there is not the usual fascinated attempts to improvise solutions with existing science.

That said, Solis does eventually work. I didn’t feel that many of the build-up scenes worked as well as they might have under a more experienced director but they start to work when Steven Ogg experiences problems. The film’s one standout sequence is the where Steven Ogg must venture outside the capsule to repair the carbon dioxide scrubbers, where he has an incredibly tight window of a few minutes to do so before the capsule rotates into full exposure to the sun and he will be incinerated, a sequence where everything starts to go wrong from his failing oxygen supplies, debris striking the capsule and his hand grips not working – all with incredibly seat-edge tension. It is only at the downbeat ending that the film lets down on this.

Carl Stathie next went on to make the UFO film Dark Encounter (2019).