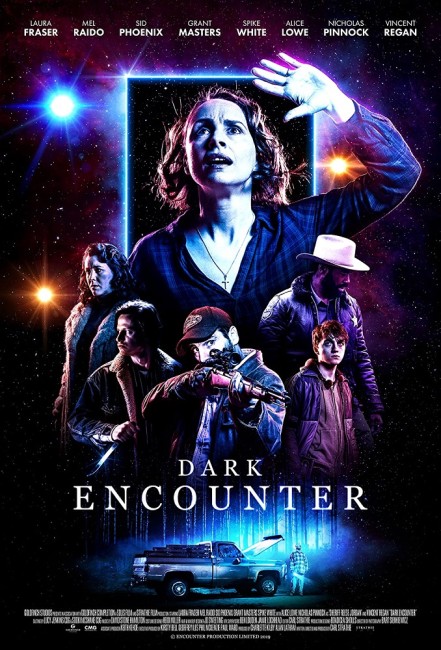 Young Maisie Anderson goes missing on November 17th, 1982 in Blue Hill County, Pennsylvania. One year later, her family return home from holding a memorial. Maisie has still not been found and is presumed to be dead. Maisie’s parents Ray and Olivia and her brothers, gather at the Anderson farmhouse along with Olivia’s sister Arlene and her husband, the deputy sheriff Kenneth Burroughs. After hearing things outside, Ray goes out with a rifle thinking youths are causing a disturbance. The other men join him only for them to see lights in the sky. The farmhouse then comes under a terrifying assault by the beings behind the lights as various of the group are snatched and taken up.

Dark Encounter was the second film for British director Carl Strathie. I thought Strathie’s first film Solis (2018), a one-man film about a rescue of a spaceship that has gone off course towards the sun, was one that had potential.

In particular, Dark Encounter reminds of Steven Spielberg’s Close Encounters of the Third Kind (1977) – especially the scenes from that film set in the farmhouse as it comes under assault by glowing lights and Cary Guffey is abducted. Carl Strathie makes much use of the backlit and frequently honey-golden light effects that Spielberg used in Close Encounters, while there are specific homages like the toy monkey with the clapping cymbal hands in the background.

Strathie does a good job with familiar material. It is not as though any of the above-listed films ever offer any particular answer to what is going on (as opposed to speculation). Thus almost all of the films are reduced to depicting the intrusions as opposed to the agency behind them. In this regard, Dark Encounter gets exceedingly vague to the point where we never even see any aliens, just shadows moving about.

Carl Strathie does a fine job building the drama of the film. The opening dinner scene with the family gathered does an excellent job in using the ensemble cast in a way that keeps the conversation naturalistic and at the same time gives us a snapshot of all the underlying tensions of the households. (It is never entirely clear why the film is set in Pennsylvania in 1982. In actuality, it was shot in the UK where all the actors are British and do a convincing job of subsuming themselves into American accents ie. you would not guess they were not American if you did not know otherwise).

Where the film comes into its own is the degree of uncanny mysteriousness that Strathie builds up around the appearances of the UFOs and the abductions. There is some tense drama in the latter section as the house is invaded, while the film arrives at a good surprise end.