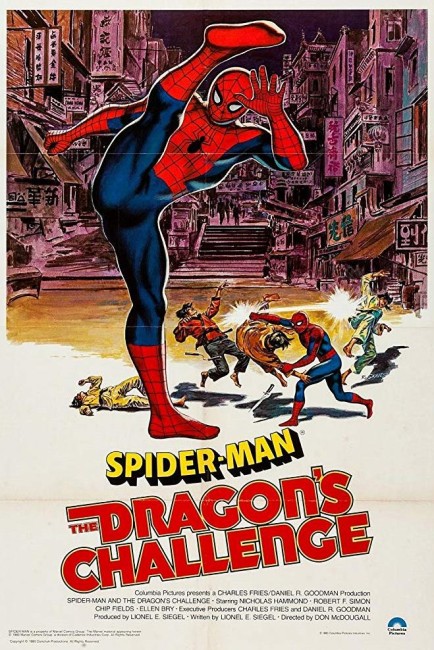 Min Lo Chan, a diplomat from Hong Kong, comes to the US seeking help from his old friend J. Jonah Jameson in clearing his name from murder charges wrongfully laid against him during World War II. He needs to find the three former Marines who can corroborate his side of the story. Peter Parker becomes involved when thugs hired by a crooked Hong Kong contractor try to ensure he does not succeed, something that requires Spiderman to accompany Min Lo back to Hong Kong.

Like the entire The Amazing Spiderman tv series, Spiderman and the Dragon’s Challenge is stultifyingly dull. It is so drably directed and photographed, the effect is akin to watching a series of out-of-focus home-movies. The action is accompanied by a frequently laughably inappropriate disco score.

Nicholas Hammond plays with an overblown vacuousness but it is a sad state when the villains are even more boring than he is. In fact, the story is so tedious that Spiderman could be entirely incidental to it – the utterly routine adventure could have been filled by any tv hero of the era from Kojak to Columbo – a sad comedown from the colourful superheroics that filled the comic-book.