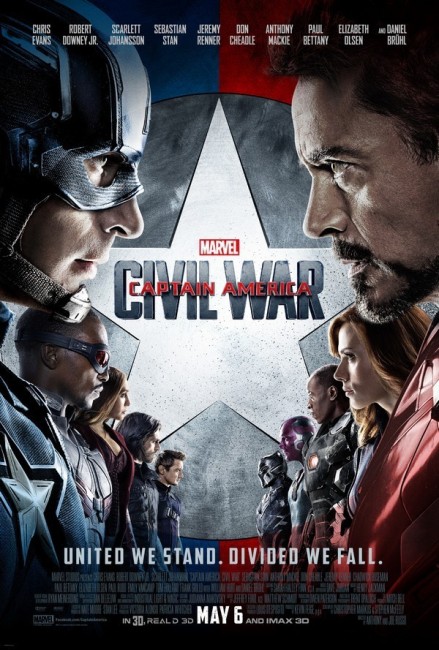 The Avengers are in Lagos attempting to stop a Hydra operation when Wanda Maximoff accidentally causes an office building to explode. Among those killed are representatives of the African nation of Wakanda. T’Chaka, the king of Wakanda, and his son Prince T’Challa head a mission to the UN to protest this. Secretary of State Thaddeus Ross informs The Avengers that over a hundred nations are preparing to sign the Sokovia Accords that will require a UN mandate before The Avengers go into action. The Avengers are split over this – Steve Rogers protesting that they cannot wait or be held accountable to committee decisions, while Tony Stark argues that they should sign up to these before something even more restrictive is implemented. Steve and Sam Wilson leave, knowing that this could mean their arrest. As the Accords are about to be signed in Vienna, Bucky Barnes detonates a bomb outside the building that kills dozens, including King T’Chaka. Steve races to Bucharest to find Bucky who protests that it was not he who detonated the bomb. A furious fight through the streets between the two factions of Avengers ensues in which Steve, Bucky, Sam and T’Challa, who becomes the costumed Black Panther, are arrested. Sokovian infiltrator Helmut Zemo shuts down the power in the detention facility to release Bucky. As he goes on the run with Bucky, Steve learns that there is not one but several Winter Soldiers in cryogenic hibernation. Recruiting various others including Ant Man and Spider-Man to their side, the two factions of The Avengers come together in a massive battle at the Leipzig airport. Steve pursues Zemo to the Siberian base that houses the other Winter Soldiers and tries to expose Zemo’s true scheme to pit The Avengers against themselves to destroy each other in revenge for the death of his family.

The film adapts Civil War (2006-7), which was widely publicised as a major event in Marvel Comics (although was notedly not preceded by Captain America’s name). Civil War was a seven-issue limited series, as well had continuity and lead-up that ran through over two dozen other Marvel titles. In the storyline, the US government’s efforts to implement the Superhero Registration Act, which would compel every superhero to reveal their secret identity, pits The Avengers against each other. The dramatis personae contains a massive line-up of Marvel characters – far more than we get in the film – including the X-Men, The Hulk, The Punisher, Luke Cage, Sub-Mariner and even several super-villains. The series ends with Captain America being killed, Tony Stark appointed head of S.H.I.E.L.D. and The Avengers split into two new groups – The Mighty Avengers and The New Avengers, consisting respectively of those who chose to be registered and those who did not.

The film keeps general faith to the Civil War storyline, strips the line-up down and jettisons many of the peripheral pieces of plot. More interestingly, there is no US Superhero Registration Act and the film is less concerned about secret and public identities than it is UN oversight over superheroes (which tends to dig awkwardly into issues of US unilateralism and surprisingly enough rewrites Captain America as a libertarian), while that story has also been blended with the Winter Soldier plotline.

The film mounts an impressive line-up of characters from the Marvel Cinematic Universe. We get all the familiar ones from Captain America, Iron Man, Black Widow, Hawkeye, The Falcon and War Machine. There is the omission of some regulars such as Thor, The Hulk and Nick Fury – apparently because Nick Fury added nothing to the story, while the others made the battle too powerful. Paul Rudd’s Ant Man, who appeared only a few months earlier, makes his debut as a member of The Avengers and we get to see him as Giant Man (which technically was an alternate guise adopted by Hank Pym as opposed to Scott Lang). Paul Bettany’s Vision and Elizabeth Olsen’s Wanda Maximoff/Scarlet Witch, both just introduced in Avengers: Age of Ultron (2015), are now full-fledged members of the group and we see the embryonic beginnings of the relationship between them that culminates in marriage according to comic-book canon. Chadwick Boseman turns up as Black Panther, who was the first ever Black superhero in 1966. (The film gives mention of his homeland of Wakanda, has his father T’Chaka killed and Wakanda is mentioned as the source of vibranium but oddly we get no explanation of Black Panther’s powers). Black Panther was granted his own film shortly after this with the massively successful Black Panther (2018).

The major new introduction to the Marvel Cinematic Universe this time is of Spider-Man. Before the MCU began in 2008, copyright of various characters was held at different studios. 20th Century Fox owns X-Men, for instance, while Universal holds the rights to The Incredible Hulk but has been happy to lease them back to Marvel. The rights to Spider-Men are held by Sony who have made various stabs at the characters – the Sam Raimi-Tobey Maguire trilogy beginning with Spider-Man (2002) and the reboot duology starring Andrew Garfield starting with The Amazing Spider-Man (2012). With the most recent Spider-Man films The Amazing Spider-Man 2 (2014) being inexplicably regarded as a flop (even though it was the twelfth biggest box-office film of its year), Sony decided to reboot Spider-Man for the second time in less than a decade and have recast the part with Tom Holland for the subsequently released Spider-Man: Homecoming (2017) and Spider-Man: Far from Home (2019).

When I read about the premise for Homecoming – that of recasting Peter Parker as a high-school student – it seemed like the flailing desperation of a studio trying to milk further mileage from a property by rewriting it for a younger demographic. In one of their smartest decisions, Sony decided to accept Marvel’s offer of conducting a crossover and premiere Holland’s Spider-Man here. The result is a stroke of genius. The best scenes in the film (outside of the action sequences) are actually those with Holland who makes for a nerdily enthusiastic Peter Parker who leaps into the web-slinging action with gung ho while giving geek lectures on the tensile strength of webbing and taking inspiration from “that old movie The Empire Strikes Back [1980].” It makes me highly excited to see what Sony do with Homecoming now.

A lot of people were calling Captain America: The Winter Soldier the best Marvel movie yet – the same ones, it seems saying the same about Civil War (and just about every Marvel film until the next one comes along). I had mixed feelings about The Winter Soldier. The Russo Brothers’ kept the action going at a fast lick but not enough of it felt like it stood out when the film was over. With that in mind, Civil War left me surprised. The Russos have upped their game from The Winter Soldier by a quantum level. The film exists as one giant superheroic punch-up – much the same as Batman V Superman: Dawn of Justice (2016) did six months earlier but far less grim and dour in tone.

The kinetic pace of the film is exhilarating. It hurtles from one sequence to the next – the opening fight through the marketplaces of Lagos; the dazzling seat-edge sequences with various people on vehicles hurtling through a road tunnel in Germany; and the climactic dust up in the Soviet cryogenic bunker that pits The Cap and Iron Man at each other’s throats with lethal regard. The film’s showcapper however is the sequence at Leipzig airport with all of the superheroes assembled furiously fighting one another around the runway and terminals, leaping from overhead struts, crashing airplanes and other vehicles down on another. It’s the sort of thing you watch superhero films for.

Where Captain America: Civil War is slightly less than a great Marvel film is much of what happens outside the action scenes. Take them out and it would be a fairly ordinary film. What made The Avengers work probably the best of all the Marvel films so far is that the camaraderie, humour and playoff between the characters made the film. The action element there was secondary to that and never anything truly earth-shattering. The Russo Brothers don’t quite seem to have their fingers on the pulse of what Joss Whedon did well – the humour and character interplay between the characters here is muted, apart from the scenes when Tom Holland’s Spider-Man enters the show – and mostly the superheroics are left to carry the film.

(Nominee for Best Actor (Tom Holland) at this site’s Best of 2016 Awards).