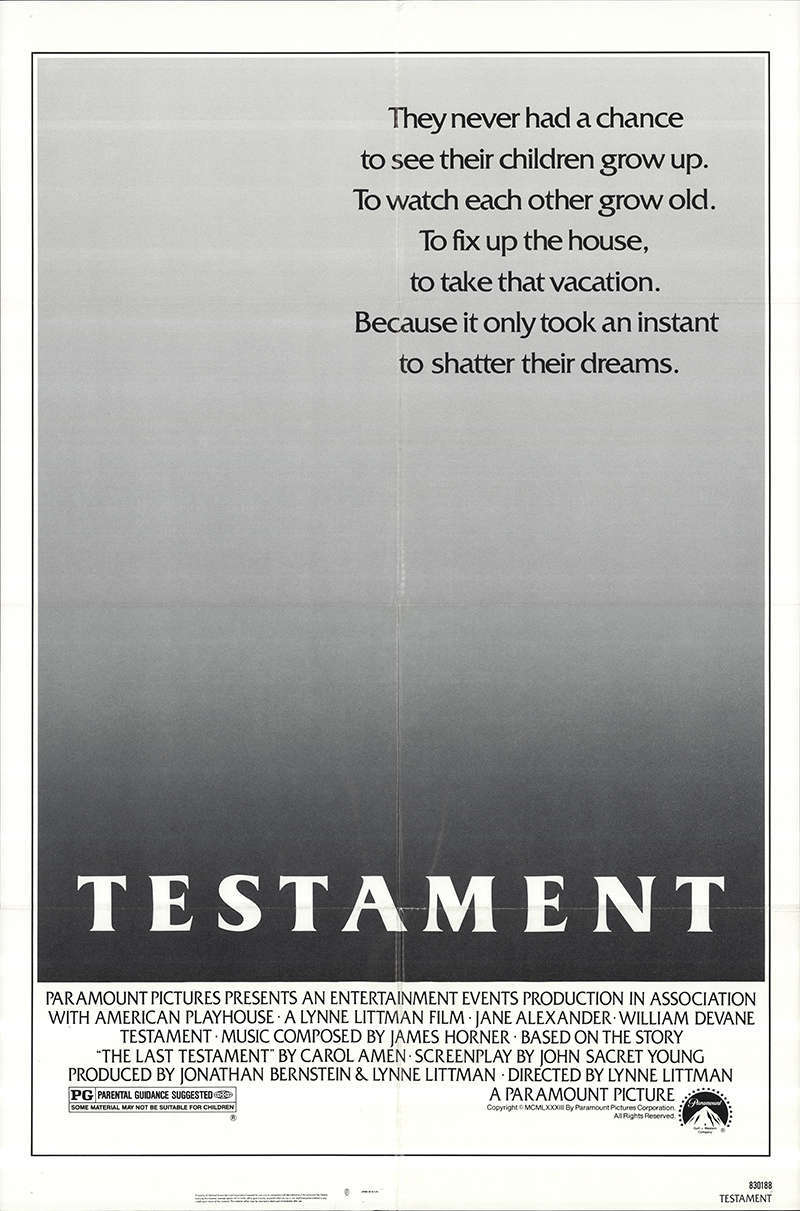 It is a day like any other in the small town of Hamlin, California. TV signals then suddenly tv signals turn to static. When broadcasts resume, it is learnt that New York City has been hit by a nuclear strike. With her husband away on a business trip and no longer able to be contacted, housewife Carol Weatherly determines to keep her family – teenage daughter Mary Liz and her two sons Brad and Scottie – together through whatever happens next. For a time, life continues fairly much as before, but around them food and petrol supplies soon grow scarce and social disorder increases. Fallout begins to affect the town and soon deaths increase beyond the manpower to bury them.

Testament was one of amid a spate of grimly real nuclear holocaust films that came out in the mid-1980s, parallel with Ronald Reagan’s massive re-escalation of the nuclear arms race. Others included the likes of Special Bulletin (tv, 1983), WarGames (1983), Countdown to Looking Glass (1984) and further afield British ventures like Threads (tv, 1984), When the Wind Blows (1986) and Rules of Engagement (tv, 1989), the Russian Letters from a Dead Man (1986) and Barefoot Gen (1983), a shattering Japanese anime about Hiroshima.

Testament also came out the same year as The Day After (1983) and it is impossible not to compare the two films. Both came out at the same time and both offered a similar ‘everyday’ treatment of nuclear war. Both were originally made as tv movies but both ended up being released to theatres. With The Day After, sponsors and advertisers began to panic when they heard in advance about the film’s no-holds-barred, grimly real presentation of nuclear war. The film was eventually aired but outside of America was released to theatres.

In Testament‘s case, it was instead decided that the film was of such a quality that it was better off being shown theatrically rather than as a tv movie and it was released to cinemas the whole world over. The Day After ended up being the more high profile of the two, but it was also the most melodramatic, whereas in fact the less recognised Testament did it all with considerably less brouhaha and soap opera and considerably greater affect than The Day After.

What is noticeable about Testament is the quiet, almost understated sobriety of its treatment of the nuclear war theme. Perhaps this is the fact that it is the only among the genre of nuclear war films to be directed by a woman. The focus of the film is all on the family (director Lynne Littman makes the final dedication on the film “to my family”) and the film rarely opens out to concentrate on the wider community-level holocaust – it does, but its greater focus is within the walls of the suburban home and the way in which the mother selflessly slaves to keep her children and the family unit together.

As such, the film is almost entirely successful in circumventing a melodramatic handling. There are few of the cliché images of rioting, looting, anarchy and social devastation in the film; instead, it remains entirely mannered in almost all ways. The results are often powerfully moving. The quiet accumulations of the nightmare – the images of Jane Alexander sewing Roxana Zal into a shroud while her voice on the soundtrack notes: “Today my firstborn died,” to her having to face young Lukas Haas who asks her to make the radiation go away with the truth that she cannot, or the poignant scenes where daughter Zal wants to know what making love might be like with the realisation that she never will experience it – are very moving.

The film is significantly aided by the quietly believable performance of Jane Alexander. (Alexander was nominated for both that year’s Academy and Golden Globe Best Actress awards for the role). The film is also notable for being one of the earliest screen appearances of a pre-superstardom Kevin Costner in the small part of a neighbouring husband who decides to leave the town for safety. James Horner’s score does perhaps overly try to ply the emotions but the film is laudable in low-key lack of melodrama. It is doubtful if the real holocaust, should it come, would be faced with such creditable and orderly dignity.

Lynne Littman was previously a documentary-maker and had won an Academy Award in 1977 for Best Documentary Short. Aside from a couple of tv movies, she has never directed any other works outside of documentaries.